Nobody likes to admit it. Not in the soccer world, especially not in the specific Euro-centric arena where people sneer at even the word "soccer." It's football, futebol and whatever you're saying yourself that isn't "soccer."

Me, I love 'em. Hearts of oak. I am sympatico with the followers of soccer in the U.S. It's not their national game, not even in the top four of pro sports in the U.S. Still sneered at by star sports pundits. The butt of jokes in late-night talk show monologues. Yet the supporters believe, like their national team, on the underdog status, the weird-kid condition.

Go on, feel the love like I do – the sympathy for the freaks and geeks of the soccer world, the misfits.

Reason for the sympatico, for me, is autobiographical. I grew up in an Ireland where soccer had the stigma of being foreign, non-national and unmanly. I know how they feel in the U.S. When everyone was talking baseball or the NBA Finals, you were thinking about Barcelona, Roma or the World Cup.

Monday's match against Ghana here in Brazil was one of those magic Team USA moments. The team didn't play particularly well. Scored a goal inside a minute and then hung on. And on and on. Ghana dominated but couldn't pass, let alone score. Then it did, tying it up. And then it started again, Team USA's grim push forward, the pluck-and-luck part of the game.

And, in the sort of Hollywood ending that makes the sophisticates of the soccer world roll their eyes, a kid came through.

The kid was defender John Brooks, scoring the game-winning goal in the 86th minute. At that point it felt like days since forward Clint Dempsey had scored early (in 31 seconds, the sixth-fastest goal in World Cup history) to put the USA ahead. And talk about nerves of steel – the USA had to deal with a huge loss of attacking prowess when Jozy Altidore had to leave the game with a hamstring injury in the 21st minute. They were up against it, as always. Suits them, apparently. Which is why you, like me, should reach out and love 'em.

To add to the texture, it was a grudge match – it was the USA's first international win against Ghana, a country that had defeated the Americans in the two previous World Cups. Suits them, again.

The official attendance at Estadio das Dunas in Natal was 39,760. The official estimate of USA supporters there was 20,000. It sounded bigger than that. The supporters sang and chanted hard. Never puny, and "puny" is how the USA is generally classified in world soccer.

Still you resist the impulse to support and urge them on, these strange Americans playing soccer while two-thirds of their country pays no attention. No appetite for the misfits striving in Brazil while the NBA championship leads the sports news?

Then think about Dempsey, who scored that fast goal and then almost had his nose taken off his face by a Ghana player. On he went, as they all do on this team. Hearts of oak, I say. Vice-president Joe Biden was there. That looked odd, didn't it? White House endorsement of the freaks and geeks.

Dempsey – dirt-poor Texas boy, learned his soccer while growing up in a trailer park because all the other kids were Mexicans and that's what they played. Legend has it, anyway. A different kind of American story. A different kind of World Cup team, this one. Go on, love 'em. Give it a shot. Call me a freak or a geek, I don't care. 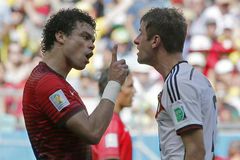