Ahead of their first four games, the city cleared out before Brazil played. Shops closed. Streets emptied. Traffic vanished.

But after having spent a week preparing for the very worst, Rio was determined to make hay while the soccer sun still shone. Hundreds of thousands of locals were out in the minutes before kickoff, lighting off fireworks, making themselves heard.

This was not an entirely hopeful display. It had the slightly hysterical feel of a wake.

They needn't have worried.

Following a 2-1 quarter-final victory over Colombia, everything is finally lining up for Brazil. The team looks renewed. Also, all the people they might expect help from – most importantly, the frothing home crowd and the on-field officials cowed by their fervour – are doing their utmost to push this nervy side toward the hexa.

They scuttled through the group stage looking terrified. The sight of several team leaders weeping before crucial penalties against Chile unsettled the entire country.

Reasonable questions were asked about the side's mental fragility. All of Brazil had found something to agree on – their team was in the midst of cracking.

Facing that relentless pressure, the team arrived on Friday night ready to take all reasonable steps to stop a rampant Colombian side. Also, several unreasonable ones.

The key problem was Colombia's play maker, James Rodriguez. Brazil had a plan to reduce his effectiveness – beat him flat.

Again and again, Brazilian midfielders – in particular, Fernandinho – went flying in to James professional-wrestling style. The Colombian is renowned for his flat aspect on the pitch. Twenty minutes into this game, he was a shrieking, red-faced basket case.

As this pattern was emerging, so was the game's most remarkable performer: Spanish referee Carlos Velasco Carballo.

A soccer game that starts out chippy must be reined in, or it will degenerate. This one started out brutal, and Velasco Carballo did nothing to dissuade Brazil's bully tactics. His reticence actively encouraged them.

One half-expected to see a Brazilian out on the field beating an opponent with a pool cue, while Velasco Carballo stood alongside, shaking his head sadly and saying, 'All right, final warning.' In a game that featured 54 fouls – 54! – the Spaniard did not start pulling out cards until the second half. Even then, the ones he handed out were almost all wrong.

This would have been nothing more than a choppy slugfest if Colombia had not swooned early under the onslaught.

In the ninth minute, a total collapse at the back allowed Silva to walk in on a corner kick and tap the ball in at the far post. He ran for the corner flag pointing angrily at his badge and screaming in to the crowd. Best guess at what that psychologist told him: "Don't let 200 million people walk all over you all the time."

From that point on, the Brazilians were at their most commanding – relentless, determined and savage.

In our imaginations, this country is a footballing artists' collective, dipsy-doodling around the field until they feel like scoring. That's a shared cultural memory from those half-remembered Brazilian sides of the seventies, and it's wrong.

In actuality, Brazil is now and always has been a profoundly skilled and shamelessly cynical set-up. It will do anything it takes to win games. Which is why it wins them with such regularity.

Brazil fully embraced that darkness for the next 80 minutes. Fernandinho and his gang chased James around the field, devastating him with sneaky hip checks and heel clips.

Meanwhile, the Brazilians were laid out across the park like patients in some super-fit triage unit. In one instance, David Luiz was clipped on the right leg, and went down clutching his left. In another, Maicon was nicked on the back of his head, and hit the ground grabbing his face.

There is a lot to admire about this Brazilian team. It'd be easier to notice if they weren't all such shameless frauds.

Meanwhile, Colombia continued to wander around disconsolately, looking for James to do something from his back. Brazil scored a second with 20 minutes remaining. It seemed over. The city began to celebrate.

With 15 minutes left, James finally found a yard of space and sent a cutting pass into the Brazilian area. Goalkeeper Julio Cesar was out quickly, missed the ball entirely and scythed down Colombia's Carlos Bacca. That's a red card every time. So, of course, Velasco Carballo showed Cesar yellow.

After slotting the resultant penalty, James wheeled away with the ball in his hands. The cameras caught an enormous, green … grasshopper? Praying mantis? … clinging to his arm. The Colombians weren't just fighting Brazilians. They were fighting every living thing in Brazil.

Colombia continued to kick in the dying moments, but Brazil sat on them until they passed out. Poor Colombia. They lost this game before the anthems were finished, and didn't realize it until the end. This time, it was James in tears.

Rio erupted at the final whistle. Fireworks were going off like artillery for 10 solid minutes.

They'll wake up with an awful hangover. Silva took an unforgivably silly second-half yellow for clipping the Colombian 'keeper on a goal kick and will be suspended for the next game. Their talismanic forward, Neymar, was taken off late on a stretcher. Local media reported he has a serious back injury and will miss Tuesday's semi-final against Germany.

You could not pick two more important players to lose, but maybe Brazil shouldn't worry. After Friday's display, one does get the feeling that the fates – as well as much stronger forces – are lining up behind a home winner. 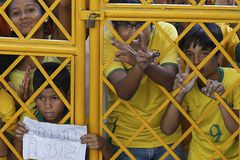 In a tale of two interviews, Brazil’s Cesar is vindicated
July 3, 2014 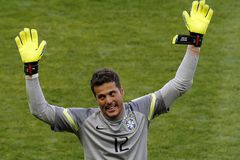 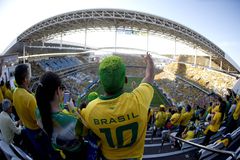