You are Brazil. You've already suffered the most humiliating loss in national (and, probably, global) history. How can it get worse?

Four days after '7-1', Brazil faced the Dutch in a meaningless third-place game that the Oranje were already on the record as saying they didn't want to play and couldn't care less about winning.

That's certainly how it looked. The Dutch were as ragged and lubberly as they've been through this entire World Cup. They still handed Brazil their second-largeset margin of defeat in World Cup history.

This tossed-off 3-0 whipping may hurt even more than the disaster against Germany. Because, by their own admission, Germany were trying.

Third place here meant nothing to Brazil, either. But they had to win this game. This was pride at stake.

What the effort they turned in revealed is that Brazilian soccer is not just going through a temporary trough. They just aren't very good. They're now the England of South America – coasting along on history rather than talent.

They have been brutally exposed here over two games. At this point, someone has to set fire to the Brazilian set-up. That wreck will be left smouldering for some time.

Throughout 90 minutes, the viewer was repeatedly taken aback at just how choppy and unskilled most of Brazil's players are. From that perspective, midfielder Oscar may have been a poor choice to start. Since he's the only player who has any sort of touch with the ball at his feet, he repeatedly made the ten other guys in yellow look even worse.

Predictably, the Selecao plane clipped a tree a few seconds after liftoff.

Two minutes in, Arjen Robben slipped past Thiago Silva and was in on goal alone. Several things happened nearly at once, all of which were wrong.

Running at full tilt and clearly trailing his man, Silva reached out and put his hand on Robben's shoulder.

Instead of running through a light touch, Robben flung himself in the air as if he'd been hit with a shovel.

Referee Djamel Haimoudi whistled the play dead and pointed to the spot. He showed Silva yellow.

The contact came outside the box. It shouldn't have been a penalty.

Robben was the last man back. If that's a foul, it's a red card. And though it was histrionically embellished – Robben really can't help himself, can he? – it was a foul.

Three men. Three errors. It was shaping up as that sort of evening.

A ball lofted in to the Brazilian area. Four defenders heedlessly chasing after it. It should have come to nothing, except that David Luiz – the local villain in that Germany game – decided to head the ball back into traffic.

Luckily, Daley Blind was standing there by his lonesome to receive the pass. He scored. 2-0. The game was already over.

Over on the bench, Brazilian manager Luiz Felipe Scolari was up on his feet coaching. No, really. Coaching! Perhaps a little late in the day to start that sort of thing.

Further down the bench, Neymar was watching the ground open up and swallow Brazil's footballing reputation. Eight days ago, he broke his back. That's what they told us.

And yet, Neymar was the first one leaping from his seat at every perceived injustice out on the field. Apparently, the only Brazilian institution that comes out of the last week looking golden is their health-care system.

With ten minutes remaining, Robben was fouled again in the area – a clear penalty. This time, uncalled. The poor ref really was doing his very best to allow the hosts some dignity. It wasn't helping.

They tacked five minutes on at the end. Brazil's last chance to save its blushes.

The Netherlands scored again on another unforgivable defensive breakdown ten feet from goal. In the waning seconds, the Dutch subbed on their third-choice goalkeeper, Michael Vorm.

That wasn't meant as an insult. It was, however, the only way to take it.

Instead of a whistle, they might've ended the game with the sound of a gate coming up. Brazil is finally being allowed out of World Cup prison.

This can still get worse if president Dilma Rousseff is forced to hand the World Cup trophy to Argentine captain Lionel Messi on Sunday night at the Maracana.

But let's try to stay positive. I mean, how often do disasters come in threes? 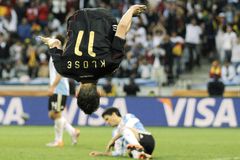