Once, while trying to explain why he does the incredibly stupid things he does, Luis Suarez went for the Three Faces of Eve defence.

"There are two of me," Suarez said. "Two different people."

There's a lot to admire about the first one – the most in-form offensive player in the world.

I prefer the second – the frothing lunatic who emerges when the first has been frustrated for long enough.

The first guy's fun to watch, but he's also a moaning coward who spends entire games rolling around like he's on chemical fire. The second is pure id. There's something freeing about watching that guy. He does things none of the rest of us would ever do, but might like to.

While there are plenty of cheaters, malingerers and swanning, effete man-boys at the World Cup, there are precious few villains. Soccer is better than any other sport at iconism, but it doesn't do evil very well at the elite level.

Nobody has the guts for it. That's one of the problems with the world today more generally – everybody needs to be loved.

Suarez doesn't care. He's immune to your hatred. It's more than that. It must, on some very fundamental level, sustain him. How else to explain what we saw – again! – on Tuesday.

Suarez was not having a fun afternoon against Italy. He'd played brilliantly against England a few days before, and then wept on the bench. Afterward, he couldn't help but crow.

"Too many people laughed about my attitude over the last few years," Suarez said, wagging a big finger.

It's hard to know what exactly he means. Does he mean the time he bit Chelsea's Branislav Ivanovic? Or the time he racially slurred Manchester United's Patrice Evra? Or the time he then refused to shake Evra's hand? Or the … we could go on like this for a while.

As the Dutch would say, his neck was growing. Then this.

Italy had identified him as the problem, and effectively marked him out of the game.

In the first half, he swept the legs out from under Andrea Pirlo. The Italian, a master at on-field jujitsu, went easily with the fall, while swinging out an arm to catch Suarez in the jaw with a sneaky elbow.

The Uruguayan did not look angry, standing there pawing at his face like a kid who just got a deserved slap from his mom. He looked offended. Almost disappointed. The rage began to build.

There was a game to play, and Italy was in the process of being thoroughly ripped off by another activist official. When it was still a nervy chess match, Mexican referee Marco Rodriguez decided to assert himself.

He showed straight red to Claudio Marchisio after the Italian clumsily raked his studs across the shinpad of an Uruguayan at midfield. There was no malign intent and, despite a great deal of flailing, no injury. It was a foul, certainly. Probably a yellow. In this situation, never a red.

But that was the game. Up a man, Uruguay began to press with confidence. They slotted through a Diego Godin header for the game's only goal. They'll advance to the Round of 16 to face Colombia. Italy's out.

That would otherwise have been the headline.

But Suarez is a man who needs to make his mark on a game, for good or ill, and often quite literally.

Shortly before the winner, he became tangled in the box with Giorgio Chiellini. As the Italian attempted to hold Suarez off, the Uruguayan dipped his head and sank his teeth into Chiellini's shoulder. They ended up in a pile.

In the following frantic moments, Chiellini ran around the field with his shirt pulled away, trying to show anyone who would look a clear set of teeth marks. Suarez was down on the pitch, clutching his ample overbite. Chewing is dangerous when the thing being chewed is still wriggling.

This is the third time Suarez has bitten an opponent. He did in 2010 in the Dutch Eredivisie. He did it again in 2013 in the Premiership. Now he's done it at the World Cup. Based on his current trajectory, Suarez will eventually bite Ban Ki-Moon at the United Nations.

The worldwide reaction was predictably hysterical, as if he'd just pulled a gun on live television. What he did is wrong, but it's a lot less dangerous than taking a guy out at the knees – which happens in every game.

Afterward, Uruguayan manager Oscar Tabarez, snapped when reporters pressed him on the bite.

"This is a World Cup of football, not of cheap morality," he chided.

Can't we have both?

What Suarez has accomplished is theatre at the highest possible level. After a little freakout and then a little think, the world decided it admired Zinedine Zidane's World Cup headbutt. That won't happen here, but this is even better.

Suarez has ascended to a perch not occupied since Diego Maradona left the game. He's a player of peerless quality who is also quite clearly nuts. He is a very talented animal and, as with all animals, you should not turn your back on him.

Of course, he will be suspended retroactively – a power FIFA reserves only for violent conduct. In all likelihood, we've seen the last of him here unless Uruguay makes the final. Without Suarez, they won't get anywhere near it.

I'll miss him. He is an indefensible man, which, in times of great moralist whinging and permanent pearl clutching, is its own sort of defence. 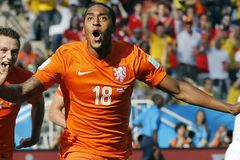