France is on its way back to Rio.

The last time it was here, it stifled Ecuador to a 0-0 tie, with ease. That was all it needed. Now, after beating Nigeria 2-0 on Monday, France is set to play Germany in a quarter-final here on Friday.

The French supporters, here in their many thousands, will be welcome. They're loud in the stadium, but cheery and nonthreatening on the streets and in the bars. Not bellicose, like some we could mention.

Thing is, in this wonderful World Cup, there's a lot to love and admire. France the team isn't one of them. Good, but clinical. Talented, but cynical. That's the gist. And a fair one.

There's cockiness about France now. An aura of invincibility. The team struggled to qualify. It came here without the soccer world being certain it was a contender to reach the final. France's rocky road is what sticks in everyone's mind.

People recall the infamous internal team implosion at the World Cup in 2010. And a feeble effort during Euro 2012.

Sure, everything changed when Didier Deschamps came up as manager and put his iron grip on the team. Years of infighting ceased; the clashes between big egos stopped.

Monday's 2-0 win over Nigeria flattered France. A canny substitution made the team more co-ordinated, but it was a mistake by Nigeria's otherwise fine goalkeeper Vincent Enyeama that led to the first goal. The second was an own goal in the dying minutes when Nigeria's resistance was shaky.

Again it was a case of a deserved victory for France, but there was little to inspire affection and wish for this team to keep going.

There are many teams at this word Cup that have created that special dynamic of warmth, even ardour. Argentina with Messi in full flight is beautiful, skilled, tactically astute. The Netherlands attacks, always. It has love/hate characters, especially in Arjen Robben, and some think Robin van Persie is both adorable and a genius. Germany has its breaktaking, incisive passing, and Mesut Ozil always looks both creative and unorthodox.

Colombia is the new craze for neutrals. All youth and speed and James Rodriguez looking like the kid who can do anything. Brazil is Brazil, the promise of samba soccer every time they take the field.

France has, well, expertise and toughness of mind. This France is like the Germany of old – efficient in getting the job done, but hard to like.

France started here with a 3-0 win over Honduras. But that game is remembered for the hacking, brutalist style of Honduras, not French flair. Next came a 5-2 trashing of Switzerland, which made many wonder: How can Switzerland be that bad?

There is plenty to admire in France. Karim Benzema has had 13 shots on target so far at this World Cup, more than any other player, and he keeps on scoring. But nobody adores him the way they adore Messi or young Rodriguez.

The former Arsenal and France star Thierry Henry, now operating as a pundit, told he BBC after the Switzerland victory that French fans are "falling back in love" with the French national team. Maybe, but the rest of the world is bit cool toward it.

In the Nigeria match, there was a distinctly calculated shift when Antoine Griezmann came in for Olivier Giroud and the team changed shape. Benzema was playing more centrally, and Paul Pogba was a lurker, ably positioned to spot an opening. So he was in the perfect position to secure when Enyeama misjudged the flight of the ball from a corner kick.

Clever, yes, and tactically admirable. But to a neutral fan, none if it felt organic. The prolific French attacking force got the job done. Like all jobs efficiently done, it brought satisfaction, not cheering from the third party watching, On Friday, they could have an epic European tussle with the Germans here in Rio. Who will take Europe's hopes to the next round?

The French fans will come to Rio with their berets and plastic baguettes, sending up the cartoon image of the country. Commendable attitude, commendable team. But nobody is swooning over the team. It's the fickleness of love, and is France's fate. 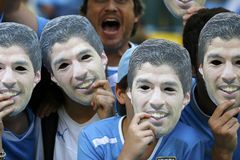