The scene was a restaurant here in Rio. Not a swank place, just plain food and cheap beer. A group of six, men and women, sat together. Friends, co-workers perhaps.

The midday TV news came on. You couldn't miss it, on the giant screen set up for World Cup matches. The top item was a report from the Granja Comary Football Complex, headquarters of the Brazil national soccer team and the Brazilian Football Confederation.

Footage showed Neymar limping from the team bus, walking gingerly. A psychologist appeared. It wasn't hard to figure out the gist of the report – the mentality of the team, after the narrow victory on penalties, over Chile. There was silence among the group of six as they watched.

Then I heard a light, persistent tapping sound, and saw a woman's fingers, her nails painted in Brazil's yellow team colours, drumming on the table. Next, she stepped outside and smoked a cigarette, her eyes still glued to the screen inside. This is one nervous nation. The national team is, one gathers, mentally fragile. The country is, for sure, terrified of playing Colombia in Friday's quarter-final.

The worry is evident everywhere.

The dynamic is slightly demented, and complex. There are three strands to the story.

First, Brazilians were shocked by the traumatized state of many players after the Chile match. Tears, quivering lips, and stunned, distant looks on the player's faces. The pressure on them was crystal clear and they felt it.

Even former players for the national team, the "Selecao," have suggested these players keep calm, get a grip. Legend Carlos Alberto Torres, of the 1970 team, criticized his country's captain, Thiago Silva, on SporTV here, saying, "In Brazil, we expect our captains to illustrate strong postures."

Zico, another legend, told Radio Globo he was shocked by the demeanour of Brazil's players who, he said, "Looked in no mental condition to carry on."

But for all the bluster of pundits, the nervousness is a deep-rooted problem ingrained in Brazil's soccer culture.

What matters is that the World Cup is here, in Brazil, and nobody on the team wants to be the next Moacyr Barbosa, the Brazil goalkeeper who allowed the goal that allowed Uruguay to win the World Cup final in Rio in 1950.

The weight, the fear of that fate, is emphatically real.

Second, and this will seem strange to outsiders, Brazil the country isn't that much interested in the World Cup. It is only interested in the Selecao. As locals will tell you here, when Brazil has been knocked out of a World Cup, the country stops paying attention. TV viewing for matches after the Brazil exit is tiny. Nobody cares much about Italy, the Netherlands or Germany cutting a glorious path to a final that doesn't include Brazil.

This is, it seems, an insular country when it comes to soccer. If Brazil is knocked out in the quarter-final, this World Cup is essentially over. But the country will be left groping and struggling to continue hosting it.

Third, most important, there's the genuine anxiety about facing Colombia. With reason.

A few days ago, when Colombia beat Uruguay at the Maracana, there was the perception, unspoken aloud by Brazilians, that a revolution was under way. A shift in the power rankings of South American soccer was unfolding. And it happened right here, at the Maracana, sending a shiver through Rio and beyond.

Tens of thousands of triumphant Colombians teemed in the city. Cocky as all get out. Outside the Maracana, I saw a TV crew from Colombia going live-to-air and the reporter was drowned out by supporters chanting that Brazil is the next to fall. Given the spectacular goals by young James Rodriguez, you couldn't blame them for their brashness.

Worse, assessment of Brazil's performance against Chile was harsh. "The team was unable to deal with Chile's strengths," declared pundit Paulo Vinicius Coelho in the Folha de Sao Paulo. In Estadao, the leading soccer columnist wrote, "Those two hours of football were worrying, too emotionally charged. There was plenty of heart but not enough skill, intelligence or strategy."

Brazil manager Luiz Felipe Scolari spent an hour with selected journalists on Tuesday and declared that the frantic pace of the Chile match won't be repeated, saying, "Ball possession is a strategy to overcome Colombia." But he also admitted that the team's psychologist, one Regina Brandao, has a vital role. Then he complained about Brazil's media being negative.

They're not negative, really. The pundits are, like the nation, nervous. The fingers tap nervously, whether hitting keyboard keys or a table in a restaurant. And rightly so. Colombia has a great team and is a rising power. Brazil has a bunch of nervous Nellies. 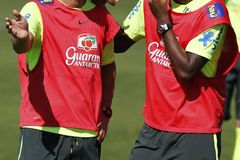 Brazil prepares for the potential of a showdown with rival Argentina
July 1, 2014