Away from the stadium where there were cops and injured protesters, away from Sao Paolo where there is seething cynicism about FIFA, this event matters with a livid significance that can stir the soul.

The significance is this – the World Cup makes the world small, united and even happy.

I've got personal feelings about it and I know the feelings are shared. Some are sentimental and that's an issue with this Brazil team.

There's a weird, worldwide need to have Brazil play fast and sweet, with a smile on their faces. That didn't happen on Thursday. A soft penalty ruined it. Neymar looked swift, great. But he's no Pele and the Pele issue goes to the heart of the dynamic that surrounds this Brazil team.

When I was 12 years old, I went to the public library in Raheny, Dublin, to read up on some stuff. I learned that soccer came to Brazil not far from where I sit in the stadium at the World Cup opener. In 1894 a man named Charlie Miller arrived on a ship at the port of Sao Paulo with some round leather balls and a rule book of how soccer is played in England. From my seat in Row X of the Arena de Sao Paulo, I could probably spot the place it happened.

Never mind the details of how soccer became Brazil's game and how Brazil came to define the beauty of it. It happened. In 1912 , not many miles from where Miller's ship landed, the Santos Futebol Clube was founded in the bairro of Vila Belmiro. In 1955, Pele, then aged 15, began playing for Santos.

It was the 1970 World Cup that drove me to read up on these stories and details. Ah yes, the 1970 World Cup. The first televised all over the world, the first shown in colour. Brazil won it in style and there is general agreement that the Brazil team of 1970 is the greatest ever. Such fluid, attacking play, such flair.

I fell in love with it. We all did, people of a certain age. We became, some of us, experts on Brazil, all of us awed by Pele.

That's fine in a way. It illuminates how soccer connects the world and breaks through boundaries that separate countries and cultures.

I live now in downtown Toronto. I can hear the roar of the crowd from BMO Field when Toronto FC play. The Brazil goalkeeper Julio Cesar plays for Toronto FC. I find that comforting in a way. People I meet here in Brazil don't think it so strange that I came here from Toronto to cover the World Cup. They know where Julio Cesar plays. They grin. What they say to me I know translates as, "Small world, isn't it?"

And it is. People crowded into bars and restaurants around the world enjoy the shared experience. Some people go to extreme lengths to be connected to a TV screen or online streaming, just to see this. The intensity of interest dwarfs enthusiasm for any other sport.

It is in this circumstance that legends and fantasies grow and blossom. The legend of Brazil and Pele of 1970 has become a core narrative of soccer. People too young to have seen it, or born long after, are entranced by the legend. The legend sentimentalizes the Brazil team even now.

But Brazil has not been a truly top team in world soccer for 12 years. Even the team that won the World Cup in 2002 wasn't fabulous. It had Ronaldo, who smirked a lot but scored when needed. I remember being in Korea to see Brazil play China and I remember how China seemed vaguely terrified by Brazil. I remember seeing Brazil warm up with passing exercises and being stunned by the skill. I had the Brazil of old, of 1970, in my head.

It's odd in a way, but Brazil's victory in the opening game here can serve to remind us that soccer followers, neutrals in particular, are crazily sentimental.

If we chose to, we should acknowledge that Neymar's goal to tie the game against Croatia was hard-fought, not finery. And we should think about that appalling penalty decision. Brazil won but it's a tainted win. Even with only one game played, it can be asserted that there are better teams at this World Cup.

We can't halt the warming glow of sentimentality or the power of nostalgia. But we do need to be realistic. It can stir the soul too. 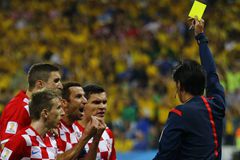 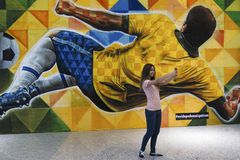