What does the watching world want? It wants a World Cup goal-filled and thrilling, twisted narratives and all. As the Round of 16 tolls on, it continues – heady, heartbreaking and full of last-minute turns.

A list of reasons why the world is getting what it wants – at last.

1. Surprising, shocking twists at the last minute: Mexico. Bloody hell. You had it won and then went into a defensive shell. The chance to derail the Netherlands and its expected, high-speed journey to the World Cup final. Oh, Mexico. As the poet (W.B. Yeats in this case) said of some attempted revolution or other: "Had they but courage equal to desire."

2. New and surprising developments: Cooling breaks. Bloody hell. What's this about? Yes, it's hot, maybe 29 or 30 degrees. Play stops so competitors can drink water. But a person is suspicious. This is what American TV has wanted from soccer all along: stoppage that allows the insertion of lucrative commercials.

3. There's a villain to hate: Luis Suarez. For a while there, the World Cup had a genius at the Maradona level. Not long after he was seen being moved around in a wheelchair – so injured was he before the tournament – he shows up and, solo, destroys England. He grinned. His teammates carried him on their shoulders. Days later he is revealed to be a maniac. Turns out, just as in the best thriller, the genius is evil, hiding a dark secret. In this instance, a fetish for human flesh. You couldn't make it up.

4. The old order is over and change is good: Spain, reigning champions and dominant national team in the world since winning Euro 2008, is torn apart in its opening game. Just like in the fairy tale that involves the little kid saying, "The Emperor is wearing nothing at all!" Italy, first imperious against England, then impotent against Costa Rica – Costa Rica! – and stymied by Uruguay. Spain's demise also means that pundits and soccer geeks can talk endlessly about the post-tiki-taka wave of soccer tactics. What's next – counterattacking? Or is Costa Rica's all-out attack the new model?

5. Goals you could watch over and over again: Robin Van Persie's diving header against Spain. James Rodriguez of Colombia taking the ball on his chest, controlling it and blasting it in against Uruguay. Goals to make you gasp, and that's only two of a possible list of 10 in the early going.

6. The host is happy: The core narrative arc of this month-long drama was always going to be the matter of Brazil winning the World Cup at home. It's still possible. Brazil is in the last eight. And as long as the host is a contender, the tournament is a more pleasant party.

7. The "nice" superstar is still in it, the arrogant one is gone: The ongoing argument about whether Lionel Messi or Cristiano Ronaldo is the best player in the world is temporarily resolved. Ronaldo, although he had the excuse of an injury at the start, did little. His World Cup amounted to one goal. Known for his preening, he is humbled. Messi, who never preens, has shown his sublime skills and even looks like he's enjoying himself.

8. Team U.S.A. is, for once, adorable: At most big sporting events, team U.S.A. is unbearable to others – all the hype, the self-aggrandizing. At the World Cup, the Americans are underdogs, toilers, giving it a go. People get to admire their spirit with genuine pleasure.

9. At last, soccer seems truly global: There was a time when people predicted Africa would compete with Europe and South America for domination of world soccer. Briefly there was talk of Asia, especially after South Korea's strong run in 2002. Now, it's simply a fact that no country gets truly trashed at a World Cup. The only real trashing victim was Spain, losing 5-1 in its first game. Currently, no team can be underestimated because of assumptions made on geography.

10. Even tedious, sub-par games turn dramatic: Costa Rica against Greece. Bloody hell. A dire game of cautious, slow-motion soccer developed into a gripping, tense epic of toughness. At first it was so bad a BBC online pundit joked that TV viewers in the U.K. might think they had stumbled on an MLS game. That changed. You never, ever know what will happen at this World Cup.

Doyle: Little to love about this cynical France team
June 30, 2014 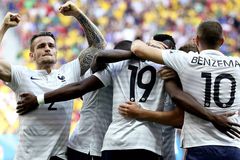 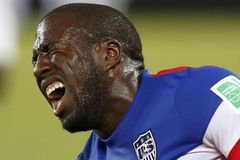 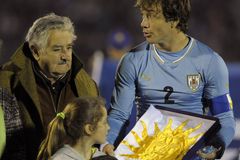