Brazil was overly ambitious in its plans for the FIFA World Cup, but will nevertheless pull off a good event, the mayor of Rio de Janeiro pledged with a week to go until kickoff.

"Up to now, there has been huge damage to our reputation. There is, when you don't have everything done," Eduardo Paes said Thursday. "We made mistakes. We shouldn't have done 12 stadiums, we should have done fewer cities – that's what brought us to this situation. But I think we're going to do great."

World Cup matches will be played at 12 different venues across Brazil; the price tag to build and refurbish those and other infrastructure so far sits at $11.3-billion (U.S.). And with just a week to go, much of it isn't yet ready. For example, 11 of 12 airports, including Rio's, are unfinished, and the Sao Paulo stadium, which will host the opener, has not held, and indeed will not hold, a test match with a full crowd.

"We're Latins. We're not used to deadlines, to keeping up with things," the mayor said.

But Mr. Paes, speaking at the operations centre where he watches life in his city flow past on a two-storey bank of coloured CCTV screens, said enough is in place to guarantee that the event will go well.

There has been considerable speculation about whether large-scale public protests of the kind seen a year ago will derail the tournament. But the mayor called those protests healthy. "The problem would be if we could not have protests," he said, reminding reporters that Brazil's military dictatorship ended less than 30 years ago. "I would be ashamed if we did not have protests."

Many of the 2013 protests ended in violent confrontations between police and demonstrators, but he said that "both sides have learned" since then. The public no longer supports anything but peaceful protest, and police, for whom such demonstrations are new, are learning about public security policing, he said.

While anti-World Cup slogans are common at protests, and in graffiti sprayed across the city, most citizens are excited to be hosting the event, the mayor said.

"I don't think people are protesting against the World Cup – they're protesting for services, for transparency, and that's happening all over the world."

While protesters often demand improved public health and education rather than stadiums, this is a false equivalency, he added. "Education has nothing to do with the World Cup – Brazil is capable of doing the World Cup and also delivering good education. If we don't do it, it's not because we chose to do the Olympics and the World Cup."

The World Cup budget is the same as one month of federal education spending, he noted.

The World Cup and the Olympics finally provided the impetus and the funding, from both federal loans and private investment, to implement infrastructure projects that have been discussed for more than 40 years, Mr. Paes said.

Brazil is home to 15 of the world's 50 most violent cities, but the mayor insisted that Rio will be secure during the World Cup, noting that crime rates have fallen dramatically in the past five years, partly because of a bold "pacification" program carried out in many of the city's favelas, formerly controlled by drug gangs. (However, police statistics show that murder and robbery rates have begun to climb again in the past six months.)

But in Rio, there is no tradition of terrorism or bomb threats, the mayor said, unlike in recent Olympic host London, or in Madrid, a city that lost out to Rio for the 2016 Games. The question of public security isn't about whether a soccer fan gets mugged, he said. "This is not a tourist issue – this is an everyday issue for the people of Rio."

The success, or not, of the World Cup in Rio and beyond will be considered a key indicator of the city's ability to host the Olympics. Mr. Paes said a recent public lambasting by the International Olympic Committee, which said preparations to date for 2016 were the "worst ever" by a host city, was "not a good experience," but he said he accepted the criticism.

"We will always try to correct things that are going badly, to work with transparency and show them we are doing things our way, the right way."

But the scolding clearly rankled. He reiterated that Rio will not be talked into building "white elephants" by the demands of the presidents of individual sporting federations.

"Our lack of infrastructure is the reason we won the bid. … If the Games are about change and a meaningful legacy, you should not go to Madrid or Chicago or Tokyo. They have everything compared to Rio. Compare Rio to Rio. Don't go looking at London."

The mayor predicted that the final match of the World Cup will see Brazil face off against archrival Argentina. "It will be a Latin American Cup – and of course we will win." 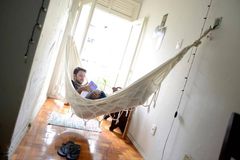 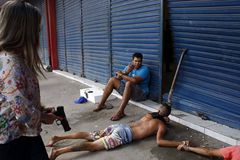