A trainer and jockey accustomed to success. A headstrong horse with a mind of its own. Together, they harnessed their collective talents to win the Kentucky Derby.

Always Dreaming splashed through the slop for a 2 3/4-length victory on Saturday, giving Todd Pletcher and rider John Velazquez their second victories in the race but their first together.

The New York-based duo has teamed up often over the years and is the sport's leading money winners. On their own, they were a combined 2 for 63 coming into America's greatest race.

Joining forces, they were unbeatable on a cool and rainy day at Churchill Downs.

"We have had a great relationship for a long time now, and we have won a lot of races together," Pletcher said. "This is the one we wanted to win together."

Sent off at 9-2 odds, Always Dreaming made it the fifth straight year that a Derby favourite has won, the longest such stretch since the 1970s.

He was followed across the finish line by a pair of longshots: 33-1 Lookin At Lee and 40-1 Battle of Midway.

"This is the best horse Todd and I have ever come to the Kentucky Derby with," Velazquez said. "Being behind me for 24 years together, a long time for him to still trust in me and give me the opportunity, it's not very often it happens in this business."

Rarely one to show his emotions, Pletcher admitted being teary-eyed behind his sunglasses.

Going into his 17th Derby, Pletcher saddled the post-time favourite for the first time. Much had been made of his 1 for 45 Derby record.

"It's becoming a little more respectable now," said Pletcher, whose 48 starters tied D. Wayne Lukas for the most in Derby history. "It felt like I really needed that second one."

Velazquez used his colt's speed out of the gate to get good position early in a chaotic start that saw several horses, including McCraken and Classic Empire, banged around. He steered Always Dreaming into an ideal trip behind pacesetter State of Honor, with mud flying in all directions on a surface that resembled creamy peanut butter.

"We got wiped out at the start. McCraken came and nearly knocked us," said Canadian-based Mark Casse, who trains Classic Empire. "The track is impossible."

Casse also trains State of Honor, who is Ontario-bred and owned.

On the final turn, Always Dreaming took command as State of Honor faded. Despite chasing a quick early pace, Always Dreaming was still full of run. No other horses threatened him down the stretch and Velazquez furiously pumped his right arm as they crossed the finish line.

"I got a good position with him early and then he relaxed," Velazquez said. "When we hit the quarter pole, I asked him and he responded. He did it himself from there."

Pletcher had his hands full in the days leading up to the Derby when the colt's behaviour was less than a dream.

He was fractious in the morning, refusing to relax.

"I was nervous watching him gallop," the trainer said.

He channeled his aggression into a determined effort on a track turned into goo by on and off rain before the race.

"I think he really came in here and knew it was game time, and he was ready to go," Pletcher said. "The most important thing to do is bring the best horse to the Derby, and that's what we were able to do."

Always Dreaming earned his fourth straight victory, proving that his five-length win in the Florida Derby was no fluke.

By winning the Derby, he accomplished something his sire Bodemeister couldn't do. Bodemeister finished second in the 2012 race.

Thunder Snow, the Dubai-based entry, didn't finish. He broke poorly out of the starting gate and began bucking. He was caught by the outrider and walked back to the barn on his own. 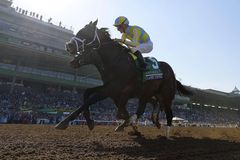