Five nights after the worst day of his young life, Denis Shapovalov was on the telephone and his voice cracked a little.

The 17-year-old, widely considered a rising star in Canadian tennis, was waiting to board a flight from Toronto to Montreal. But Shapovalov was determined to speak about what he had done, what the days had been like since – and the shame and regret that may haunt him for some time.

On Sunday night, the reigning Wimbledon junior champion from Richmond Hill, Ont., was down two sets during the deciding match of Canada's Davis Cup tie with Great Britain. Then the player known as a really good kid pulled a ball from his pocket and swung at it in frustration, expecting it would soar innocuously to the ceiling of Ottawa's TD Place. Instead, his body torqued too far, the ball rocketed right toward chair umpire Arnaud Gabas and struck the official in the eye with such force that it swelled instantly.

"I did a very stupid thing and I'm really embarrassed and ashamed," Shapovalov said during a lengthy phone interview. "I went into complete shock after I hit it. The worst part was I had no idea how badly I may have hurt him. I've never hurt a single person in my whole life – never even wanted to hurt someone. That was so unprofessional of me. It was such a fluke accident. I promise I am going to mature from it and learn from it."

The bizarre incident left Gabas with visible bruising but no serious damage to his eye. Shapovalov, expected to carry the torch for Canadian tennis, lost the match by default, giving Great Britain a 3-2 win and a trip to the Davis Cup quarter-finals. Shapovalov was fined $7,000 (U.S.) by the International Tennis Federation – far less than the maximum of $12,000 it could have fined him for such an offence.

Asked to recount his memories of that night, Shapovalov took a deep breath and parsed them together as best he could. He remembered the crowd falling into a dead silence, the French umpire clenching his face in pain and Canada Davis Cup coach Martin Laurendeau saying something Shapovalov couldn't hear because the whole scene went foggy for a few moments.

He remembered his adviser, Andrzej Kepinski, speaking to him in the locker room while several people tried to comfort him. Shapovalov wanted to talk, but the words just wouldn't come out.

"Andrzej stepped in to talk to me and I can't remember it all, but he basically said: You have to go face the music," Shapovalov recalled. "In my mind I had two options: hide from the world or man up and own up to my mistake. I knew I wanted to fess up to it and show who I am."

He requested to speak with Gabas personally. The umpire was remarkably kind. Gabas even joked about the wild odds of that ball hitting him.

"I wasn't sure how he would react to me, but he was so nice to me," Shapovalov said. "He was so professional. He told me he was okay and I shouldn't worry. I hope I get to see him again."

Shapovalov, who is no stranger to the media after a stunning win over then-world No. 19 Nick Kyrgios at July's Rogers Cup, faced the Davis Cup press after the incident. The Canadian team let him make a statement but then had Laurendeau field reporters' questions. The teen and his parents drove back to their home in suburban Toronto.

"This is a 17-year-old kid on the rise, not a 29-year-old veteran who has a history of anger-management issues. He's a good kid and he didn't mean to do anything bad," Laurendeau said by phone from Montreal on Thursday. "Denis can decide which road to take here. He has to make sure this never, ever happens again, or else people will label him among the 'bad boys.' Many people have been really supportive, really willing to give Denis the second chance he deserves and we all want him to take that second chance now and run with it."

The next day, Shapovalov woke up at his parents' home. His mother, Tessa, once a player for the former Soviet Union who now runs her own tennis academy, wouldn't let him lie around. She got him up early to walk the dog. He then went for a long drive and picked up his fitness coach to take him for lunch for his birthday. Along the way he chose to see some Tennis Canada employees working in the offices of Toronto's Aviva Centre.

"Then my mom had me face the kids at the academy and hit with them. These are kids who have always looked up to me and I was scared of how they might look at me, but they were so accepting," Shapovalov said. "I had a lot of fun hitting with them and being around them. Some of their parents were asking my mom all about it and they all felt bad for me. My parents said, 'You better learn from this and you can't be taking the sport for granted.' My mom said, 'You have to find a way to channel your emotions. You're not out there alone. You have so many people watching you play.'"

He kept his previous obligation to attend Wednesday's Conn Smythe dinner in Toronto, a charity for Easter Seals. He spoke about the incident before the crowd that night as part of an interview-style discussion led by broadcaster Christine Simpson. He wondered if the audience might boo him, but instead he found warm applause. Eric Lindros was among the fellow athletes he met that night and the former NHLer perked him up, pointing out that we all make mistakes.

Tweets of support came from his veteran Canadian Davis Cup teammates, Vasek Pospisil and Daniel Nestor, testifying to Shapovalov's good nature and maturity – and his incredible promise. More words of support came from across the tennis world, from people such as John Isner, Yevgeny Kafelnikov and Ivan Lendl.

Tim Henman reached out to Shapovalov this week, and the two plan to speak soon. The retired British pro and one-time world No. 4 was tossed from Wimbledon in 1995 after he accidentally struck a ball girl with an errant tennis ball.

"I take comfort in knowing he understands how I feel – and he went on to be known as Tim Henman the great gentleman of the game," Shapovalov said. "He moved on from it so well and had such a great career, and I want to do the same thing."

Shapovalov, who stopped playing junior events last summer to concentrate on pro tournaments, is scheduled to train in Montreal with Laurendeau this week and stay with one of his best friends, 16-year-old Félix Auger-Aliassime, winner of last year's Junior U.S. Open. He'll be a wild card entrant at an ATP 250 tournament in Marseilles, France, this month before returning to Canada to play Futures and Challenger events in Quebec.

"Emotion is good in tennis if you can channel it the right way and Denis is a very creative guy on the court, so we don't want him to lobotomize himself and remove all of his emotions along with the terrific passion in his game," Laurendeau said. "What he did wasn't acceptable and we want him to manage the emotions. He's a humble kid and a fantastic prospect. We think his tennis can do the talking." 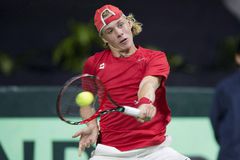