On their way into the U.S. Open, players and their retinues must submit to a gentle security screening.

The paying customers have to stand in line forever and a day, empty their pockets, get barked at, metal-detected and magic-wanded. The players get a pretend search at their own dedicated entrance that boils down to someone gingerly patting their gear to see if it feels like a neutron bomb.

Nonetheless, there is a lot of eye-rolling and exaggerated sighing if this process takes more than 10 seconds.

One afternoon, I watched a complete nobody – as in, I couldn’t place her – complaining bitterly, at great volume and length, as her enormous crew of hangers-on was searched.

A couple of minutes later, Roger Federer walked in alone, bent over under the weight of three enormous racquet bags. When the guards tried to wave him through, Federer insisted on stopping.

An hour spent watching this procession told you more about your favourite tennis stars than a hundred one-on-one interviews. Which ones were popular with their peers, which ones were nice to the little people, which ones expected to be pampered like visiting heads of state.

But that’s what they are now. For the first time in a long time, being a pro athlete is starting to look and feel like actual work.

The most high-profile petri dish for this continuing experiment is the Australian Open. The tennis tournament has been going on for nearly a week, but the soap opera surrounding it has been running for a month.

Before anyone showed up, tournament organizers made it clear to all participants that they would be treated like any other visitor to Australia. If they showed up germ-y, they’d have to take a two-week timeout.

We’ve all been at this for a year. Everyone’s tired of it. Smart people have learned to keep that weariness to themselves. This is pretty basic pandemic etiquette.

So it wasn’t remarkable that the tennis players thrown into hard quarantine keenly felt the loss of the perks that allow them to ignore rules that apply to everyone else. But it was remarkable that so few of them had the common sense to avoid publicly expressing that disappointment.

Even after the internet had landed on a couple of them like a piano, many kept at it. They’re still at it.

After he was bounced in first round, Frenchman Benoît Paire called the quarantine “shameful.” Another first-round failure, Tennys Sandgren, called the preparations “a joke,” complaining that after two weeks without practice he got blisters from holding a racquet. Former Slam winner Victoria Azarenka bemoaned the lack of “fresh air” in her hotel room.

Welcome to having a job.

Somewhere along the line, we conflated two seemingly similar, but actually quite different, ideas about work. Yes, in the best-case scenario, your work should be fulfilling. It should give you some sense of purpose and an organizing principle around which to wrap your life. But no, it does not follow that work is fun.

If you’re lucky, work is occasionally fun. Maybe even often fun. But it’s not meant to be all fun. Nothing is.

Being cooped up in a hotel room for two weeks isn’t fun. It’s work. This was a requirement of the job.

If someone offered me $98,500 (the minimum prize money earned by any qualified singles player at the Australian Open) to stay in a catered room for two weeks, I’d have only two questions: “Is it a Marriott?” and, “Can I keep the points?”

I’d stay in a tent on the shoulder of the highway for two weeks for a hundred grand. Then I’d treat myself to a few nights in a really nice Marriott. Maybe a JW.

People – not just tennis players, but lots of normal people – seem to have decided the pandemic is nearly over. That regular life as we remember it is two vaccine shots and three-to-six months away.

There is no guarantee of that. It is just as likely we will be living under some sort of COVID protocols for years to come. This Australian Open may very well be the way the Australian Open goes for the foreseeable future. And Wimbledon. And the Olympics. And the World Cup. And any sort of event anywhere.

If that’s the case, athletes, like the rest of us, are faced with the choice to adapt. Some won’t. They’ll be the ones moaning about blisters and the quality of the room service. They’re the ones who’ve got it into their heads that their work is so important it must be permanent fun.

But some will adjust. Some may even thrive in a new, Spartan sports world where the number of sports psychologists you have on personal retainer is less important than your ability to sit quietly by yourself in a room.

You can already see the new winners and losers beginning to sort themselves out at the Aussie Open. As usual, the players with structural advantages created by fame and money, the ones who fly private and rent villas, are doing well. None of them caught the COVID-19 express charter into Melbourne.

But there are also lesser lights who don’t seem bothered by inconvenience, or perhaps are more used to it than their famous peers. Players such as world No. 71 Hsieh Su-wei.

Hsieh is the 35-year-old journeywoman who bounced Canadian Bianca Andreescu in the second round.

Asked afterward why she likes the Australian Open so much – which in her case means she wins the occasional match there – Hsieh said, “I’m not worried about my tennis. If I don’t play good? I go enjoy some good food here. I’m quite happy to have the tennis life here.”

Now there’s someone I’ll bet you carries her own bags. 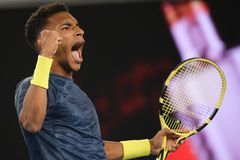 Serena advances at Australian Open, while spectators are sent home due to COVID-19 outbreak
February 12, 2021 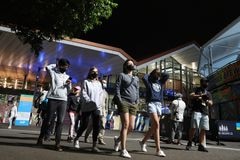 No crowds, but Australian Open will continue during lockdown
February 11, 2021 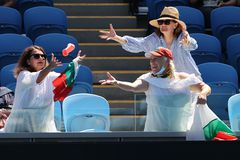