Though the world has gotten wise about Félix Auger-Aliassime, he still sends back coded messages to the homeland only we can understand.

Auger-Aliassime made history on Monday. He won his first grand slam match. In so doing, he became the first men’s player born in the 21st century to do so. He is a Great Big Deal, perhaps the most obsessed-over male newcomer in the sport.

Also on Monday, the Guardian used Auger-Aliassime as a stick to beat England’s enemy within, crediting Canada’s recent tennis success to “an enlightened immigration policy.”

You know when you’ve made it in sports? When people use you as the lever to pry open subjects that have nothing to do with sports.

Auger-Aliassime somehow manages to float above all this tumult. He spent the majority of his post-match presser doing the most Canadian thing possible – trying to convince people he’s not all that great.

Someone asked if his first win in a major tournament felt “like a long time coming.”

Auger-Aliassime got a blank look.

Then he confused the teenager-who-needs-to-teenage narrative by using the word “exigent” in describing himself.

If you want people to believe you’re not precocious, you should avoid sending them to the dictionary.

Auger-Aliassime continued on in this poor-mouthing vein.

On the fact that bookies have him sixth-favourite to win this tournament – again, one he’s never before played in: “I think that’s a bit crazy.”

On expectations: “I’m already going faster than the majority and they want me to go even faster. Which I think is sometimes not realistic.”

Then Alex Zverev and Stefanos Tsitsipas went out and proved Auger-Aliassime’s point. The two most touted members of the younger generation both lost their first-round matches on Monday.

That pair may be young, but neither is new any more. Rafael Nadal, Roger Federer, et al already ate one generation of their own children. Now they’re eating the next. That’s what Auger-Aliassime is trying to avoid.

Canada has had its tennis phenoms, but he is something different. This isn’t a kid with an unusual skill set (Milos Raonic) or good timing (Eugenie Bouchard) – the sort of athlete with a real shot.

This is someone people believe can be an all-timer. The best point of comparison his beaten opponent, B.C.’s Vasek Pospisil, could come up with was Rafael Nadal. When asked for superlatives, Pospisil supplied them. But they all end up sounding the same – “sky’s the limit” and so forth.

A better indicator was his using Auger-Aliassime as the punchline of a joke. Pospisil has been out of tennis for nearly eight months after surgery on his back. Monday was his return match.

“Going into the tournament, I made a few comments to my team about how it would be nice to play someone who’s not too physical.”

Pospisil didn’t need to deliver the kicker. He’d already got his laugh.

So you get why Auger-Aliassime needs to begin rather vigorously pumping the brakes on his own ad campaign.

He’s had a remarkable 2019, going from a player on the fringes of the top 100 to 21st in the world. Making that initial breakthrough – and thereby putting the grind of qualifiers and top-ranked first-round opponents behind you – may be the biggest step up in tennis.

But for someone of Auger-Aliassime’s calibre, now comes the really hard part.

It’s not fair, but that’s why these people get paid so much – to work under unfair circumstances.

Perhaps alone among his Canadian counterparts, Auger-Aliassime understands the value of a counter-propaganda campaign to his own good press. It’s not modesty. It’s insurance.

The more he does of it, the better off he will be. The endorsement money and perks of fame will wait for him. Best to get the tennis right first. It’s a lesson others might have profitably learned.

If Auger-Aliassime was being exceedingly Canadian on Canada Day, we ought also stop to congratulate Pospisil. He has had a long, quiet career. Now he’s busy becoming quite noisy. He could be the Louis Riel of men’s tennis.

Pospisil is in great demand lately for his thoughts on the ATP’s system of governance – one which severely limits the influence of players in order to profit tournament organizers. He’s not one of the few men’s pros who will talk about the subject at length. He’s the only one.

On Monday someone invited Pospisil to do so again. He inveighed against a tilted board, a lack of legal recourse and the way revenues are shared.

“There was a Deloitte report that said they have never seen a structure this disastrous in sports,” Pospisil said. “We are battling a monopoly of power.”

He spoke of “scare tactics” used to silence players. Has he gotten any official blow-back for talking this way?

“Not yet,” Pospisil said, smiling delightedly. “But I will.”

It was a remarkable bit of oration, especially for a sport as hive-minded as tennis. It was also sadly underattended because of Pospisil’s world ranking (187th). If Federer said something far milder, it would be seismic.

So here’s to two fine Canadians doing us proud in a way only Canadians can truly understand. One is telling people he’s not as cool as he seems (though he plainly is). The other is trying to fix a system that’s made him millions of dollars, because he believes it is unfair to people who haven’t.

The two also played each other. One of them won. After the match, they didn’t do the bro hug, which is tennis’s go-to. They took each other gently by the shoulders and spoke for a bit, each genuinely pleased for the other. That was the most Canadian thing of all. 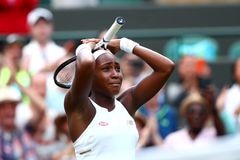 Naomi Osaka eliminated in first round at Wimbledon
July 1, 2019 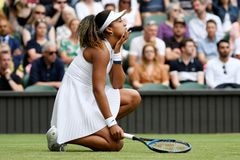 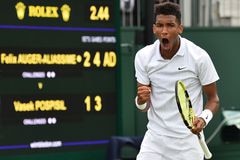