The showdown between Canada’s best two female tennis players did not disappoint at the Rogers Cup on Tuesday night.

In a match that lasted more than two hours and had thrilling swings in momentum, rising 19-year-old star Bianca Andreescu delivered a resilient 4-6, 6-1, 6-4 win over 25-year-old Eugenie Bouchard. Despite it being a first-round meeting, it was arguably the most intriguing all-Canadian female singles match ever played inside this country.

It was a highly-anticipated return to competition for Andreescu, who has been largely absent from the WTA Tour rehabbing a shoulder injury since her stunning title run at Indian Wells back in the spring.

The teen from Mississauga, Ont., advances to the second round in Toronto, where she will face Daria Kasatkina for the first time on Wednesday, the world No. 40 from Russia who upset 12th-seeded Angelique Kerber on Monday.

Despite the thrilling three-setter, Bouchard leaves an eighth straight tournament without a victory, but called her performance a “medium step” in her quest to climb back up the WTA rankings again.

Tuesday’s match was one between Canadian Fed Cup teammates, and it was a cruel twist of fate that the country-women had to square off so early in the event. But the two women embraced it.

Barty unable to overcome Kenin in second round of Rogers Cup

They had officially played each other just once, back in January. Andreescu dominated that match 6-2, 6-0, in the quarterfinals at Newport Beach, a Challenger event Andreescu eventually won.

The two Canadians could have been forgiven for being cold or awkward with one another. Instead, the opposite was true, on the court in their warm post-match exchange and in their playful exchange on Instagram.

“Tennis is a pretty serious sport, so it’s just nice to let loose a little like that,” said Andreescu of their pre-match social media banter.

Bouchard came into the night with a less-than-impressive 6-12 record in the 2019 season. Her last win was a first-rounder in Dubai back in February. It had been a long while since Bouchard resembled the player who had grabbed the tennis world by the throat in 2014.

Andreescu was little-known in Canada before she charged into the 2019 season with a titanic spree that saw her blast from a ranking of 152nd to 24th. She upset Caroline Wozniacki and Venus Williams on her way to the final in Auckland, made the semis in Acapulco, and won a Challenger at Newport Beach. Then came her Cinderella run at Indian Wells, where she went from wild card entrant to tournament champion and earned a whopping US$1.35-million prize.

The teenager charged right into the Miami Open from there, and nabbed three more wins before retiring with shoulder pain in the fourth round. She took two months off and tried to come back at Roland Garros, but it was short lived. She’d played 36 matches in a very short time – winning 32 – and that nagging shoulder was a constant reminder.

Attempting a return this week in her hometown, Andreescu’s team worked to keep her obligations with sponsors and media light. She looked rusty and uncomfortable in the first set against Bouchard. She struggled through 18 unforced errors – the most common of them flubbing the ball into the net. The teen was fighting with her serve too, resulting in three double faults.

Early in the night, there was little sign of that unique slicing, pace-changing style of tennis the Romanian-Canadian had shown while perplexing experienced WTA players in her title run at Indian Wells.

Andreescu displayed her emotions – both hollers and fist-pumps of excitement and grunts of frustration. Bouchard showed little at all in the first, even when breaking the younger Canadian early and hitting some nice winners. The Montrealer took the first set and walked to her seat with little celebration. It looked like maybe the 2014 Wimbledon finalist and one-time World No. 5 was about to have a night.

Andreescu, who is staying at her family home this week, had her parents Nicu and Maria in the crowd. They rarely travel with her, so it was a rare treat to go just 15 minutes to see her daughter play.

She cleaned up the errors in the second set and looked more in command. There were flashes of the resilience Andreescu had shown in that memorable final over Kerber at Indian Wells. She steam-rolled Bouchard 6-1 to force a third set as the cloud-covered sky in Toronto darkened to night.

The two women arm-wrestled with the momentum in the third set as the crowd reacted loudly to every point.

Andreescu had a chance to break Bouchard at 5-3, but the 25-year old fought off the match point and battled back to steal the game, extending the night.

Andreescu then served for the match, and Bouchard wouldn’t survive another match point. The youngster took care of business.

“That was really, really cool to play a fellow Canadian in Canada, to have, you know, a sold-out crowd and to feel the love,” said an upbeat Bouchard after the match. “I don't know if she got a bit more fan support than me tonight, but I felt the love out there.”

Andreescu said she felt physically like “a 12 out of 10” in her return from the lengthy hiatus to heal her shoulder and focus on her fitness.

“I haven’t felt this strong in a while,” said Andreescu. “I’m really grateful for that break.” 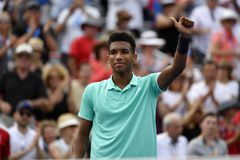 Barty unable to overcome Kenin in second round of Rogers Cup
August 6, 2019 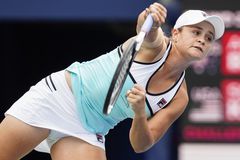 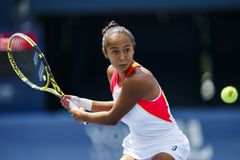