An ailing Bianca Andreescu will have to try to dig out of an early hole at the WTA Finals – if the Canadian decides she’s healthy enough to stay on court.

The 19-year-old from Mississauga lost 3-6, 7-6 (6), 6-3 to Simona Halep after the Romanian saved a match point in the opening contest for both players on Monday.

Andreescu received treatment on a lower back injury after the second set and appeared to struggle with movement at times in the third set.

After the match, Andreescu said “my back friggin’ hurts.” Asked if the injury could cause her to drop out of future matches, she said “we’ll see.”

The US$14-million season-ending tournament splits the eight players into two groups – Andreescu, ranked fourth in the world, and No. 5 Halep are in the Purple Group. After a round-robin, the top two from each group advance to the semi-finals.

“Not much to say really,” a disappointed Andreescu said. “It was a good match. She fought really hard. I didn’t take my chances in the second set, so I’m really disappointed about that.”

Andreescu said her back hadn’t bothered her recently.

“I really don’t want to blame my back, but I felt like I didn’t have the same power [in the third set] as I did in the first and second set,” she said. “But I fought well with what I had in the third. I’m proud of that. Still, pretty disappointed.”

Andreescu has now lost two matches in a row in the aftermath of a 17-match winning streak. It marks the first time she has lost two in a row since July-August, 2018.

It was the first career meeting for Andreescu against a player she grew up cheering for as a youngster. Andreescu’s family comes from Romania and the teenager spent some of her childhood in the country.

“I didn’t feel intimidated at all stepping on the court,” Andreescu said. “I know I looked up to her a lot, so being able to play her was really fun. Maybe I’ll get to play her again here, get my revenge.”

Halep, with serve, fought off match point in the 12th game of the second set and then put Andreescu away in the tiebreaker on her third set point.

Like Andreescu, Halep also received medical attention after the second set, getting her foot treated.

Halep broke Andreescu to go up 5-3 in the third set and held on serve to finish it in two hours 35 minutes.

“Today was a challenge because she’s almost 10 years younger than me,” Halep said. “I was really proud of what I did after having a back injury for almost a month.”

The match featured contrasting styles when it came to use of coaches. Halep asked for multiple visits from her coach, Darren Cahill, while Andreescu did not request any chats with her coach, Sylvain Bruneau.

Andreescu is the first Canadian to play in the WTA Finals since Eugenie Bouchard went 0-3 at the event in 2014.

Earlier, defending champion Elina Svitolina of Ukraine stretched her unbeaten run at the season-ending tournament into a new year, beating Karolina Pliskova 7-6 (12), 6-4 in her opening match.

Svitolina, the only player in this year’s field who has not won a title this season, was unbeaten in the tournament last year.

After exchanging service breaks in the first set, Svitolina converted her seventh set point. Pliskova also had a chance to take the first set, but she failed to take advantage of a set point at 9-8 in the tiebreaker.

“You tell yourself to stay in the moment,” Svitolina said of the lengthy tiebreaker. “You just try to play one rally at a time, to don’t rush. Even when I had the chances to finish the set, because there was few, I thought I could play better.”

After the tiebreaker, Pliskova struggled to stay in the match.

“I think that decided all match,” the Czech player said. “Even though I had some chances in the second set, too, it was a big part of the match, the first set.

“Everything what I just won was because I made a winner or because I was pushing her. Overall I think she didn’t give me many mistakes.”

Svitolina jumped ahead 2-0 in the second set and then broke again for a 4-3 lead.

Halep and Svitolina are now 1-0 in the Purple Group, while Andreescu and Pliskova are 0-1. 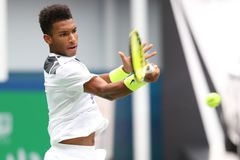 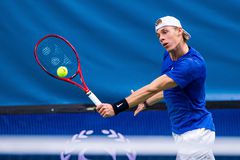