An unprecedented tennis season saw Canada hold strong in a chaotic campaign that forced athletes to become part-time players with a calendar completely jumbled by the COVID-19 pandemic.

Despite the many challenges, three Canadian men are in the top 25. Up-and-coming youngsters are making strides. Intriguing veteran comeback stories continue to develop.

And that’s all without mentioning 2019 U.S. Open champion Bianca Andreescu, who didn’t play a competitive match this year.

With youth on its side, Canada’s tennis future looks bright.

“We’re in for a watershed of a decade,” said Tennis Canada president and CEO Michael Downey.

Denis Shapovalov, 21, is the top-ranked Canadian in the men’s world rankings at No. 12. The lefty from Richmond Hill, Ont., and 21st-ranked Felix Auger-Aliassime of Montreal, 20, are the youngest ATP Tour players in the top 25.

Milos Raonic of Thornhill, Ont., rose to No. 14 this season and Vancouver’s Vasek Pospisil climbed to No. 61. The veteran players, both saddled with injuries in 2019, are nominees for the ATP comeback player of the year award.

Andreescu, who battled injuries during her breakthrough campaign and again this past season, plans to return for the upcoming Australian swing. She’s seventh on the WTA Tour’s rankings list.

Leylah Fernandez, two years younger than Andreescu at 18, cracked the top 100 this season at No. 88. Ottawa’s Gaby Dabrowski is ranked 10th in doubles.

Despite the success at the elite level, the national federation was dealt a massive body blow by the pandemic.

Tennis Canada had to lay off 40 per cent of its staff – close to 50 people – last June, Downey said. Almost all tennis development investments over the last eight months had to be cut, he added.

“If we had done nothing, we would have lost $31-million,” he said. “That’s a staggering amount of money for a not-for-profit sports federation.”

Adding to the season of extremes was the juxtaposition of the sport’s popularity – a great outdoor sport option in a pandemic thanks to built-in distancing – against the rising pressure many clubs face due to lockdowns.

“We’re already short of accessible, covered courts in the country,” Downey said in a recent interview. “There’s only 750 of them in total. To lose any of these facilities could be really dramatic for the future of tennis in this country.”

As for 2021, Downey and his team are looking at three scenarios for the Rogers Cup in the summer. Limited attendance, if government and health officials allow; a spectator-free, broadcast-only tournament; and a regular-capacity operation if vaccines are rolled out in time, an admitted long-shot.

“We want to have a turnkey plan in place so we’re ready and we can go up or down depending on what approvals we get from the various levels of government,” Downey said.

The first big tournament of the 2021 campaign is the Australian Open in Melbourne, now slated for Feb. 8-21. It would be Andreescu’s first Grand Slam appearance since her title at Flushing Meadows.

“One thing that Bianca will have in her back pocket is the experience of having had an extended break before and being able to come back and find her competitive confidence pretty quickly,” said former national team coach Robert Bettauer, now CEO of the Pacific Institute for Sport Excellence in Victoria.

Many top pros, corporate partners and federation board members have also contributed, helping push the overall total past the $850,000 mark with less than two weeks to go.

“It is doing so much better than we expected and it’s because people don’t want to see our sport fall behind,” Downey said. “We have a lot of tennis mavens in this country that really believe in the sport.”

A steady if unspectacular season comes to a close for Canada’s Auger-Aliassime
November 23, 2020 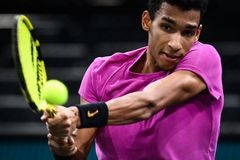 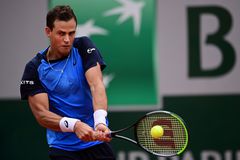 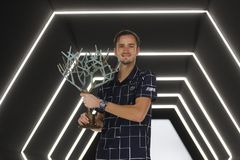