As she has done for most of the 2019 tennis season, Bianca Andreescu kept winning Monday night at the U.S. Open.

Make that early Tuesday morning, when the 19-year-old from Mississauga, Ont., won her way into the quarter-finals in her first main-draw appearance at the U.S. Open.

Andreescu defeated American qualifier Taylor Townsend 6-1, 4-6, 6-2 to advance to a final-eight meeting Wednesday with No. 25 seed Elise Mertens of Belgium.

The clash between two versatile, all-court players who have so delightfully pushed the boundaries of the women’s game during this final Grand Slam of the season was highly anticipated.

And from a tactical point of view, it did not disappoint.

It wasn’t a hitting contest as much it was a chess match, played on a tennis court.

It was a match of momentum swings and adjustments, as the Canadian and her 23-year-old opponent threw everything in their considerable bag of tricks at each other.

Townsend’s serve-and-volley game plan had gotten her to the second week of the tournament. But she quickly had to go back to the drawing board when Andreescu had an answer for everything.

The Canadian teenager had seen Wimbledon champion Simona Halep, one of her role models, fail to counter Townsend’s forward-thinking game in a shocking second-round upset.

But Andreescu had solutions.

The Canadian tried to keep her first-serve percentage at a high level, so Townsend wouldn’t be able to chip and charge on her weaker second serve. She put more heat on her second serve, which caused some double faults, but also kept the American from attacking as often.

She jammed Townsend with some body serves to create some awkward returns, thus reducing the American’s opportunities to take the net.

Andreescu came to the net herself and finished off points with volleys. She hit drop shots to lure Townsend in under circumstances that were not of her own choosing.

The Canadian also hugged the baseline on both the first– and second-serve returns, standing some six feet closer, on average, than Halep had.

That positioning robbed Townsend of the element serve-volleyers most covet: those extra nanoseconds of time to get as close to the net as possible for that first volley.

Andreescu directed many of her returns down the line. That’s harder to do, but she found areas of the court Townsend couldn’t cover on the volley.

Andreescu also established the lob early on – something Halep never conjured up against a player who sometimes, literally, had her nose right over the net.

“I think I’m a pretty good problem solver on the tennis court,” she said. “I wasn’t always very good at that. It developed over time, I guess, with practise. I’m glad that showed today.”

The crowd, which had to wait more than half an hour after the end of the match between Rafael Nadal and Marin Cilic, was sparser then the encounter might have deserved.

Those who did stay were mostly on Townsend’s side.

“I heard some Canadian fans here and there, which was nice, especially in tougher moments,” Andreescu said. “But no, it’s not easy. I tried not to pay attention to that, but it’s hard when it’s, like, everyone. I’m glad with how I managed to just keep my cool.”

Andreescu countered the crowd with an aggressive presence built to quiet those fans whenever she could. The Canadian hit 13 winners and went 7-for-10 at the net in a quick first set, while holding Townsend to just seven winning points in 17 trips.

Almost everything she hit went in. But those narrow margins worked against Andreescu in the second.

Suddenly, she was making more errors. And it was Townsend who got off to the fast start in the second set by jumping out to a 2-0 lead.

As the overhitting continued, the crowd support for her opponent increased. And for the first time in her last few matches, the pressure and stress – and the Grand Slam opportunity that beckoned enticingly – began to show a little bit.

A double fault into the net – her seventh of the match – gave the second set to Townsend. And after an hour and 12 minutes, all that great work was neutralized.

And yet, the match was dead even.

“I tried to take the momentum from the first set into the second set as much as I could. She was just on top of it really in the second set. She played really, really well. She was coming up with incredible shots, just getting me off balance. Obviously the crowd really helped her, I’m sure,” Andreescu said.

“But I just tried to stay in my own bubble. I tried to just focus more on myself and my game.”

Andreescu was definitely unsettled and a little shaky. But she has known almost nothing but winning in 2019. And that carried her through. She found her rhythm again.

Opinion
Bianca Andreescu could be a boon for Canadian men’s tennis, too
August 30, 2019 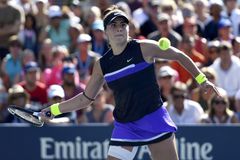 Canada’s Bianca Andreescu advances to third round at U.S. Open with win over Flipkens
August 29, 2019 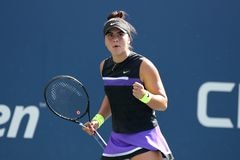