The unseeded 18-year-old from Mississauga, Ont., upset eighth-seeded German Angelique Kerber 6-4, 3-6, 6-4 in the women’s final at the BNP Paribas Open on Sunday.

“Hopefully this moment can be a great inspiration for many young athletes because like I always say if you believe in yourself anything is possible,” Andreescu said afterwards in her on-court interview. “And like my mom always told me through the years, if you work hard, you dream big to get big then you can accomplish so many things.

“That’s what I’ve been doing throughout many years and now this moment has become a reality so it’s really, really crazy.”

“Congratulations to Bianca for an unbelievable tournament,” Kerber said. “You just played amazing the whole tournament and so you deserve to win the title here.”

The Canadian was also gracious to her German opponent.

“It was amazing to share the court with you today,” she said. “You are an incredible champion and an inspiration.”

Andreescu has become a major story on the women’s circuit this year. With the victory Sunday, Andreescu has won 28-of-31 matches this season and becomes the first wild-card entry to capture this event.

She is projected to rise 36 spots to No. 24 in the WTA Tour rankings on Monday.

Andreescu earned (US)$1,354,010 million for the victory and received lavish praise from none other than the legendary Rod Laver.

“A star is born, congratulations Bandreescu – what a fighter you are,” Laver tweeted after the match.

The Canadian followed in the footsteps of Naomi Osaka, who was a little-known 20-year-old when she won the title last year. Osaka used it as a springboard to win titles at the U.S. and Australian opens while ascending to the No. 1 ranking in January.

“Yeah, it’s been a crazy ride. Truly a Cinderella story. Naomi did this last year. And now to be able to have my name in front of so many amazing champions is, it means the world to me,” said Andreescu.

Andreescu needed roughly 40 minutes to take the opening set. Neither player served well – Andreescu was 60 per cent on first serve while Kerber was at 67 per cent – but the Canadian held serve throughout and won all of the points on her second serve, compared to 55 per cent for Kerber.

The German also had 14 unforced errors in the opening set.

The two remained on serve to start the second set, although Andreescu seriously threatened to get another break in the third game. But the German repeatedly held the surging Canadian off before going ahead 2-1.

And Kerber forced the Canadian to continue to work hard in the fourth game, registering a break on some Andreescu unforced errors for the 3-1 advantage. Then the German again held serve to win a third straight game for commanding 4-1 lead.

And after Kerber held serve to go ahead 5-2, Andreescu showed her frustration by repeatedly banging her racket on the surface as she left the court. The two then held serve, with Kerber serving out the set 6-3.

Kerber played a much more aggressive game in the set as Andreescu had 19 unforced errors. And the German was 1-for-1 in break chances while the Canadian was 0-for-2.

The two again held serve to start the third set but Andreescu required medical treatment on her right arm/shoulder after going ahead 2-1. However the German took control of the set with a break to go ahead 3-2 when Andreescu put a shot into the net.

At the break, Andreescu told her coach, Sylvain Bruneau, “My feet were burning” and that she was having trouble moving. Bruneau calmly encouraged his pupil to continue battling and competing.

Andreescu took the advice to heart. She broke Kerber to tie the match 3-3, held serve to surge ahead 4-3. then broke the German again for a commanding 5-3 advantage with the chance to serve for the title.

Andreescu had three championship points but couldn’t pull the trigger. Kerber secured the break when Andreescu’s attempted drop shot went into the net to pull to within 5-4 as the Canadian received some treatment on her right leg at the break.

Again, Andreescu looked fine once play resumed, capping her impressive tournament run by converting the fourth championship point for the break and career first. And upon capturing the victory, she kissed the playing surface then laid on it before acknowledging the crowd.

“I just want to enjoy this moment, because I don’t want to take anything for granted,” said Andreescu. “You never know what next week brings. I just want to savour this.”

Meanwhile, Dominic Thiem got his first Masters 1000 title after coming from a set down to defeat Roger Federer 3-6 6-3 7-5 and win the BNP Paribas Open on Sunday in Indian Wells.

Momentum swung in Thiem’s favour in the deciding set when he smacked a forehand winner down the line to break Federer and take a 6-5 lead. The Austrian fell on his back and covered his face with his hands when Federer, who had been bidding for a record sixth Indian Wells title and 101st tournament victory, netted on match point.

The 25-year-old Thiem, who will rise four places to a career-high world number four on Monday, paid tribute to his opponent. “It is such a pleasure to compete with you, to learn so much from you, and to play with one of the biggest legends of all time,” he told the 20-times Grand Slam champion during the trophy presentation ceremony.

“I feel like it’s not my right to congratulate you, you have 88 more titles than me, so I’m just hoping you play more and we can have some other big finals,” he said with a laugh.

Federer was gracious in defeat after falling in the final in the Southern California desert for a second consecutive year. “It has been a great week for me even though it didn’t work out today,” he said. “What a great week for Dominic. Wonderful playing at the very end and throughout the week. You deserve it.”

(With story from Reuters) 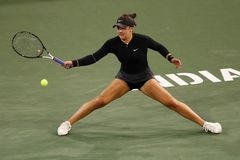 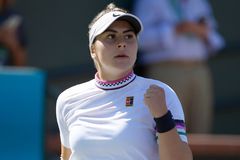