Milos Raonic booked his ticket into the fourth round of the U.S. Open on Friday with a surprisingly easy 7-6 (8), 6-4, 6-3 victory over long-time nemesis Stan Wawrinka of Switzerland.

Raonic had only victory in five previous meetings with Wawrinka.

Raonic, of Thornhill, Ont., will face American John Isner next in the Round of 16.

The match lasted a little more than two hours as the 27-year-old Canadian launched 14 aces and won 87 per cent of points from his first serve.

He also fired 43 winners and had 27 unforced errors.

Wawrinka had 29 winners, 28 unforced errors and was unable to break the hard-serving Raonic even once in the match.

Wawrinka, making his first return to the site of his 2016 triumph since undergoing knee surgery, showed he was still shaking off the ring rust despite encouraging victories in the first two rounds.

The first set went down to the wire with nothing to choose between the two rivals, neither of whom were unduly troubled on serve.

Raonic lost the first three points of the tiebreak before recovering to level at 3-3 and showed great strength of character to save two set points before going on to claim the opener.

“It was tough,” the Canadian said in an on-court interview. “I was fortunate I got through that because I was falling behind in that tiebreak.”

Wawrinka could not match his opponent’s intensity in the final two sets and paid the price for some poor shot selection.

The 33-year-old is one of the best all-court players on the men’s circuit and his one-handed backhand is matched only by that of his compatriot Roger Federer in terms of elegance.

It let him down repeatedly on Friday, though, as Raonic, sensing a weakness, targeted that side and duly prospered.

The Canadian serve-and-volley specialist made sure he stayed on the front foot throughout, coming to the net behind his booming serve 37 times with a success rate of 73 percent.

“I’ve got to just keep getting sharper,” added Raonic, who is seeded 25th. “I’ve got to find a way to get ahead a little earlier in the points and not get too defensive.

“If I can play on my terms I can compete against anybody.”

Earlier, Shapovalov lost a hard-fought, five-set match in the third round to No. 5 seed Kevin Anderson.

While Shapovalov showed a lot of emotion on the court – fist-pumping and yelling after scoring on audacious backhand shots and throwing his racket in frustration after surrendering key points – the experience and imposing serve of the six-foot-eight South African proved too much to overcome.

“It’s a couple points here and there. Like I said, it was a close match. I had a lot of chances to break back, wasn’t able to do it today. He served big when he needed to, played unbelievably big. Yeah, it was a great match,” said Shapovalov.

“We were both really happy with our tennis. It’s great to be out there. Yeah, obviously it’s disappointing to lose, but a lot of positives from it,” he added.

Still, Shapovalov, a 19-year-old form Richmond Hill, Ont., showed flashes of brilliance in the loss, particularly in the fourth set when he had the crowd on it feet as he broke Anderson in the deciding game.

Shapovalov battled in the fifth set when he fought off four match points en route to winning the ninth game, but Anderson held his serve to love in the deciding game to take the match.

The Canadian prodigy said his game has grown in leaps since his run to the fourth round of the U.S. Open in 2017.

“I just feel like I belong out there this year. I’m able to compete with anyone out there, as I showed today. I feel like my game’s at a different level.”

Anderson, losing finalist last year at Flushing Meadows, fired 11 aces and clubbed 31 winners in his second five-setter of the week after going the distance in his first-round battle with American Ryan Anderson in Monday’s heat.

In cooler conditions on Friday, Anderson’s serve was, as usual, his most potent weapon, but it was his defence that proved the difference.

The towering South African saved seven out of nine break points he faced and forced Shapovalov into 77 errors, much to the dismay of the vocally pro-Canadian crowd.

Shapovalov, the 28th seed, was the sloppier of the two and topped the unforced errors count while also stumbling into eight double faults.

The roof was closed on the newly built Louis Armstrong Stadium for the first time during the second set, but it did not appear to disrupt the momentum of either player.

Anderson heaped praise on his opponent, who is 13 years his junior, calling Shapovalov an “unbelievable competitor” during a post-match broadcast interview.

“That was an amazing match,” the 32-year-old said. “You’re definitely going to be seeing him in the years to come.”

Anderson, who has reached the final at two of the past four Grand Slams, leads his fourth-round opponent Thiem 6-1 in their head-to-head, but fell to the 24-year-old in May in the Madrid Masters semi-finals.

Nadal kept getting pushed to the brink and kept coming up with the answers.

He was two points away from falling into a two-set hole.

He was two points away from dropping the third set.

He was one point from losing the fourth set and being pushed to a fifth.

Instead, the No. 1-ranked Nadal moved into the fourth round at Flushing Meadows for the 10th time in his past 11 appearances.

Nadal, who is bidding for his fourth U.S. Open championship and 18th Grand Slam title over all.

Each of the last two sets took more than an hour before Thiem moved on to a fourth-round matchup with Anderson, the 2017 U.S. Open runner-up.

Thiem won a five-set match that lasted 3:34 against another American, Steve Johnson, in the previous round. 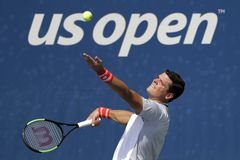 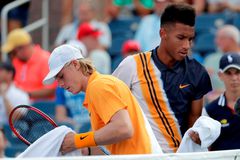 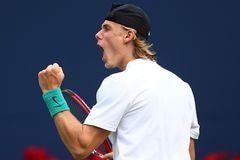