Denis Shapovalov roared back from a bad first set to post a 2-6, 6-3, 6-2 win over lucky loser Joao Sousa of Portugal in first-round action Tuesday at the Western & Southern Masters 1000 tennis tournament.

Shapovalov, from Richmond Hill, Ont., won on his first match point when his forehand was returned into the net by Sousa.

Meanwhile, Serena Williams was forced to withdraw just hours before her match was scheduled to begin. She cited the same back injury that forced her to retire from the Rogers Cup final on Sunday in Toronto. The injury raises questions about her fitness ahead of the U.S. Open, which starts Aug. 26.

“I came to Mason on Sunday and have tried everything to be ready to play tonight, and was still hopeful after my practice this morning, but unfortunately, my back is still not right, and I know I should not take to the court,” Williams, winner of 23 Grand Slam titles and a two-time champion at Cincinnati, said in a statement.

For Shapovalov, it was the second tournament in a row that the Canadian, ranked 34th in the world, won his first match. He had five-match losing streak – part of a 2-9 run dating back to March – heading into last week’s Rogers Cup men’s tournament in Montreal. He beat France’s Pierre-Hugues Herbert in the first round in Montreal to end his run of futility before falling to world No. 4 Dominic Thiem.

It looked as if Shapovalov’s struggles might continue against world No. 43 Sousa, who beat the Canadian in the only other meeting between the players – a 6-4, 4-6, 6-4 win in Auckland, New Zealand, back in January.

Sousa broke Shapovalov in the match’s first game and looked to be in complete control as he cruised to a 6-2 first-set win.

Shapovalov got back into the match with a confident second set. He won the first game with an ace, then broke Sousa to go up 2-0. He went up 3-0 after a nervy hold that went to deuce twice, and then held the rest of the way to even the match at one set apiece.

The Canadian continued to apply pressure, breaking Sousa to open the third set. He broke Sousa again to go up 4-1, then won while serving for the match in the eighth game of the set.

Shapovalov hit 28 winners compared with seven for Sousa, who advanced into the main draw in Cincinnati after 10th seed Fabio Fognini of Italy withdrew. However, Shapovalov also had 31 unforced errors – many of them coming in his error-prone opening set, to just 19 for Sousa. The inconsistency could also be seen in Shapovalov’s serve. He had five aces, but also hit into six double-faults.

Next up for Shapovalov is Frenchman Lucas Pouille, who advanced with a 6-3, 7-6 (6) win over American qualifier Denis Kudla.

Also on Tuesday, Novak Djokovic overcame some early jitters in his first match since his triumph at Wimbledon last month to see off Sam Querrey 7-5, 6-1.

The defending champion and world No. 1 fired his 15th ace on match point to make up for his slow start on the sun-soaked courts.

“I made three double faults in my opening game and lost the break. I was quite a nervous at the start,” he said of falling behind 2-0 against the big-serving American.

“I’m really glad to overcome a challenge like this and get myself going.”

Djokovic, who defeated Roger Federer in an epic final at Wimbledon, said he needed time to recover from the surge of emotions.

“That was one of the most epic matches I’ve been a part of and probably the most demanding one from the mental perspective,” he said of his five-set victory.

“So it really did take me some time to recharge my batteries, especially in my head. My body was fine.”

Stan Wawrinka advanced to the second round with a 5-7, 6-4, 7-6 (4) victory over Grigor Dimitrov, and fourth-seeded Dominic Thiem withdrew because of illness.

Wawrinka next faces qualifier Andrey Rublev, who advanced with a 6-7 (4), 6-4, 6-2 victory over 15th-seeded Nikoloz Basilashvili.

The seven-time Grand Slam champion is the oldest woman in the draw at 39. She has made her deepest Cincinnati run since reaching the 2012 semifinals.

Bertens, seeded fifth, rallied from deficits of 3-0 and 5-2 in the third set to force a tiebreaker. The 2-hour, 17-minute match ended when she sailed a forehand wide.

The 23-year-old Kontaveit came from 5-3 down and saved a set point at 6-5 on the way to taking the opening set against the former world No. 1.

Russia’s Ekaterina Alexandrova, Zheng Saisai of China and Croatia’s Donna Vekic were among other early winners. 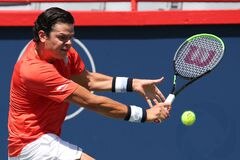 Auger-Aliassime and Raonic through to second round at Stuttgart Open; Shapovalov loses
Subscriber content
June 11, 2019 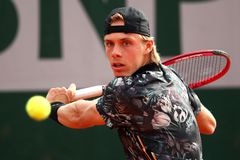