A few weeks ago, Nick Kyrgios did something stupid, which is the most highly developed of his talents.

Without any good reason to do so, Kyrgios ripped a bunch of his colleagues. Most people grabbed hold of his comments about Rafael Nadal. He called the Spaniard “super salty.”

“Super salty” – while not kind – isn’t cruel. Turned a certain way, it’s a compliment. So there was a great rush to ask Nadal about it.

Nobody asked Novak Djokovic about Kyrgios’s thoughts on him. Those cut far too close to be talked about.

Kyrgios said of the world No. 1: “I just feel like he has a sick obsession with being liked. He just wants to be Roger [Federer].”

And: “This whole celebration thing [turning to each section of the stand and throwing out his hands from his heart] that he does after matches, it’s like so cringeworthy.”

And: “We’re talking about a guy who pulled out of the Australian Open one year because it was too hot. No matter how many Grand Slams he wins, he will never be the greatest for me.”

The last bit is fine. Why would Djokovic care what Kyrgios thinks of him in terms of professionalism? That’s not a contest.

But the first two – yow. Those hurt because they’re true.

Djokovic has a personality tic that constantly pushes his internal meter up to “Maximum Impress.” He’s like a kid who jumps on the piano as soon as visitors arrive and bangs out Beethoven’s 9th. He is – and this is hard to define and impossible to miss – a try hard.

This tendency has prevented him from being widely admired, though he may soon be the most successful men’s player in history. Nor is he widely disliked – which, if they are of a certain McEnroe-esque bent, can be just as fun for some people.

Djokovic instead inspires a nullity of feeling. Not loved, not despised, not nothing.

When Federer or Nadal play at Wimbledon, the grounds go quiet. Even those without a seat huddle in place to watch the match electronically.

When Djokovic played his quarter-final on Wednesday afternoon, the pathways were thronged with pedestrians headed this way and that. Federer arrived on court shortly after Djokovic’s win. The place went quiet again.

Has there ever been so great an athlete who inspires so little passion, either for or against? It wouldn’t be possible in team sports, where passion for the collective transfers onto individuals, regardless of how awkward they are.

You can’t think of anyone like this in the individual sports. Djokovic should be a Nicklaus, Woods or Palmer of tennis. Whatever you think of those three guys, you do at least think something.

But it hasn’t happened. Djokovic is just The Other One. The other, possibly better one.

As the years pass, Djokovic appears more acutely aware of this situation. He isn’t nearly as much of a goof as he was in his younger days – clowning to the crowd, doing impressions of colleagues.

He’s grown more insular. He smiles less. Even when things are going well, he has the look of a man expecting the sandbag to land any moment. His default presentation now seems to be “guy who’s seen it all.” He can’t always hold it together.

After Wednesday’s win, an Italian journalist asked him an ornate question analogizing the Big Three to wine, as in both age well.

“Sassicaia,” Djokovic blurted out, producing the name of a cultish Italian red. The journo pulled back in his seat, impressed.

Djokovic couldn’t help but add, “When I used to drink it” and smile. The impression was of a man trying to seem worldly and otherworldly at the same time. It would be hard to imagine Federer doing the same routine in front of an audience. He is not infected by this need to appear smart.

As Djokovic talks, you can see the wheels turning. Some people think of what they’re going to say before they say it. Djokovic appears to be thinking about how what he’s about to say will be received. That disconnect is what makes him impervious to adoration.

If you were producing The Novak Djokovic Show, this is the point at which you’d suggest a heel turn. Perhaps not a full Kyrgios, but halfway there

He will never be as praised as the two men to whom he is tethered in the global imagination. Why not be the bad one instead? Throw more tantrums. Rip a few opponents. Gloat. He’s earned the right.

Because the problem is not tennis. The tennis is so overwhelmingly good that, like the man performing it, it can sometimes seem banal.

After an early wobble, Djokovic destroyed Wednesday’s opponent, David Goffin, 6-4, 6-0, 6-2. When you watch a Djokovic match, it’s hard to pick out the particular thing he’s doing because he’s doing everything. Moving his man about; constructing points; somehow managing to overpower people even when he isn’t serving.

Goffin took a stab at explaining it in urgent Franglais that had the cadence of poetry: “Even if you play well, it’s not enough because he continue, continue to play deep, deep, close from the line, left, right.”

Goffin waved his hand around and pursed his lips: “He was everywhere.”

There are few athletes in all of sport who elicit real awe in their opponents. The sort of awe that makes it difficult for people to feel bad they lost to you. Of course I lost, they tell themselves. He’s that good. He’s everywhere.

LeBron James gets it. Lionel Messi gets it. Federer and Nadal get it. And so does Djokovic. He’s in sport’s most elite club, one that doesn’t accept applications for membership. That can only be conferred by your enemies.

Djokovic will probably win here. And all people care about is Federer and Nadal and how they’re getting along and will they do it again and, God forbid, what if they ever leave?

What must that be like for the other guy? To know how good you are. To want respect and admiration. To get it from every person who goes to work on a tennis court.

But then to be denied it in the place you really care about – everywhere else. 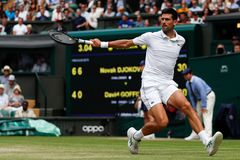 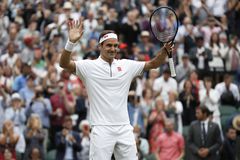 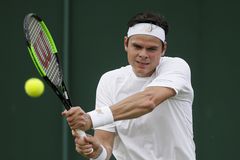