Over the weekend, Roger Federer was forced to try something new – defend his integrity. He didn’t do a very good job of it.

Federer may be the world’s most successfully branded person. Among his portfolio of sponsors is the Swiss financial giant, Credit Suisse.

Credit Suisse invests in all sorts of things, including oil and gas exploration. Environmentalists have angrily taken note, but there’s not much point in picking a fight with a bank. Everybody already hates banks, so nobody cares.

Instead, they protested against Federer. A bunch of them stormed Credit Suisse locations and kicked off impromptu tennis matches within them. They raised banners reading, “Credit Suisse is destroying the planet. Roger, do you support them?”

It didn’t catch much attention at the time, but it is now. The protesters were recently in court. Federer is in Australia – at the moment, the focus of climate-change anxiety – preparing for the year’s first major. Greta Thunberg pointed her finger via social media, and everybody began picking up stones and forming a circle.

"I appreciate reminders of responsibility as a private individual, as an athlete and as an entrepreneur, and I’m committed to using this privileged position to dialogue on important issues with my sponsors,” his half-hearted rebuttal statement read in part.

What, exactly, does that mean? Is Federer going to talk Credit Suisse out of, you know, making money?

Federer’s the first to get it in the neck, but they’ll be coming for the rest soon. No sector of society is more vulnerable to climate protest than pro sports. Unlike banks, they make their money from public approbation. Unlike oil companies, they don’t bankroll governments.

Professional athletes are highly visible, highly remunerated, highly mobile, highly out of touch and highly sensitive to criticism. In the Protesting 101 manual, that is what is called a five-point target.

It’s hard to feel sorry for the pros. They set themselves up for this with their great love of easy causes. Nobody does a better job of wearing pink on the right days or looking mournful during a moment’s silence. There has been no social ill they can’t find a way to co-opt for marketing purposes.

Until climate change caught global traction. This issue can’t be pushed off to the side by wearing the perfect T-shirt during warm-ups.

Most North Americans are vulnerable to this line of attack because we are all shameless hypocrites. We’ll bang on all day long about how terrified we are about bush fires in Australia (Federer is also trying that tack), but it won’t stop us air-conditioning our homes into functional igloos during summer.

Flying has become the shorthand for this hypocrisy. “Do you fly?” Is to the 2020s what “Ever do drugs?” was to the 1980s – part-accusation, part-public shaming and part-statement of fact. Because everybody did drugs then and everybody flies now.

No one is more vulnerable to this weapon than professional athletes. They fly everywhere, constantly. Look at the season schedule and do the math. Sixty, 80, a hundred flights a year. Probably more. And they aren’t taking any buses.

The successful ones use private planes. The teams use lavish charters. All of them are sped through customs and get only cursory security checks.

In one memorable instance, the World Cup-winning Brazilian soccer team refused to get off its flight and greet a throng of waiting fans until they were guaranteed they wouldn’t have to pay duty on 17 tonnes of expensive junk they’d brought back from their travels.

If you are a member of the one per cent, there is nowhere you’re more aware of your status than at an airport.

That makes this a combination of principled outrage over carbon footprints and a less principled one over the fact that, unlike the rest of us, they never get screamed at about putting their laptop in a separate bin.

Climate-change activists haven’t come for sports yet. They’re already asking people to give up bread. Moving on too quickly to circuses might seem like overkill.

What can sports do in response? Not much. The easy solution is paying for carbon offsets. The sports apparatus certainly has money enough to afford them.

But this struggle is no longer about amelioration, it’s about abstinence. At some point in the very near future, we are all going to be asked to give up frilly things we enjoy. What’s more frilly than sports?

Unlike, say, Hollywood or the British royal family, sports has been smart in just not talking about it. Name a high-profile climate-change evangelist in the ranks of sportsmen or women. There is none. Even the most clueless of them recognize how exposed they are on this score.

What happens when you put a bunch of stories like that together? It becomes a trend. Trends become movements. And movements are bad for business.

How long until the New York Yankees are being asked to justify flying to games in Philadelphia instead of taking a two-hour drive? Or until people start noticing that many pros are financially cozied up to the climate-change villains in finance? Or until LeBron James is being asked to explain why his car isn’t electric?

Federer’s sponsorship flail is a tipping point for the sports industry. From now on, it’s going to be difficult-verging-on-impossible to say nothing about climate change and their role in it. Problem is – what can they say? 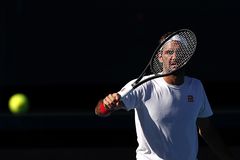