It makes sense that when Maria Sharapova wanted to say goodbye to tennis, it would instead be a sort of hello to the next phase of her career.

Sharapova retired on Wednesday in an essay published by Vanity Fair.

It doesn’t sound much like her, because it was presumably written by a team of marketing hacks.

Instead, it sounds like the Sharapova you’d still like to front your aspirational brand of housewares or line of luxury SUVs.

“These courts revealed my true essence. Behind the photo shoots and the pretty tennis dresses, they exposed my imperfections – every wrinkle, every drop of sweat,” writes “Sharapova.” “How lucky am I to have found a kind of ground on which I felt so exposed and yet so comfortable.”

The essay manages to be both mawkish and de-sentimentalized (she does not mention any other person by name). That’s a real trick. It’s a masterpiece of personalized ad copy, but not worthy of the product being sold.

Because this touchy-feely Sharapova is not the tennis Sharapova we will remember.

At her best, that Sharapova was a blank-faced assassin. She was the only player capable of driving Serena Williams to fits of rage.

That Sharapova mocked reporters at a slapdash media conference flung together in order to get ahead of news of her drugs ban: “If I was ever going to announce my retirement, it would probably not be in a downtown Los Angeles hotel with this fairly ugly carpet.”

That sounded more like the real Sharapova. That Sharapova was so worldwide she could curl a lip around “downtown” Los Angeles and make it sound as bad as "Dubuque.”

That Sharapova was one of the most famous athletic faces on Earth, and yet was neither hero nor villain. People didn’t love or hate her. Instead, they were fascinated by her. Her hauteur was irresistible.

She was a human brand first, but also one of the best in history.

Which is to say, that Sharapova was unique.

We will see her like again. Her total earnings (US$325-million, according to Forbes) guarantee she is the target every future player is trying to hit. But no one will do it quite the same way.

Sharapova was one of the last assembly-line kiddie pros. Born in the Soviet Union; raised from early childhood at a tennis academy in Florida; signed by sports giant IMG before the age of 10; turned professional at 15.

She won Wimbledon at 17. She was world No. 1 at 18. It would take a while, but Sharapova would eventually take all four majors and wind up with a total of five Grand Slam wins.

For a moment, at the beginning, it seemed as though Sharapova might dominate women’s tennis the way Roger Federer was beginning to dominate men’s.

Sharapova versus Williams may be the great unacknowledged sports feud in history. Neither woman would publicly admit to hating the other, though they plainly did.

In her autobiography, Sharapova wrote that the conflict began when she’d heard Williams in “guttural sobs” after beating her at Wimbledon.

Williams did not like that. From that point on, Sharapova would never beat her again.

Asked about the bio upon its release a couple of years ago, Williams called it “100-per-cent hearsay.” That means she took the trouble to read it. Which is the surest mark of a pure hate.

The pair helped define each other. In an odd way, they pushed each other to the top – Williams in terms of tennis rankings and Sharapova in terms of brand exposure. For a while, you could not think of one without the other.

Though both came from lean beginnings, Williams scored the role of working-class hero. Which made Sharapova the representative of corporate tennis.

She didn’t exactly shirk it. For the past 10 years, it’s been impossible to walk down any luxe boulevard in a world capital and not see Sharapova’s face at least once. Even as her tennis career was atrophying, her exposure was expanding. She’d become more representative of glamour than any movie star.

Sharapova won her last Slam in 2014. She was still young then – 27. But she had an absolute ton of miles on her. She’d slipped back to the pack by that point, while Williams had begun lapping the field. Their rivalry was still fun to talk about, but effectively over.

In 2016, Sharapova failed a drug test. She’d been caught taking the previously legal heart medication meldonium, which has performance-enhancing properties. It was particularly popular with Russians.

Despite that little jab about retirement, in the end, that’s what she did that day. Sharapova was banned for 15 months. She returned a shadow of herself.

She muddled about for a while. She hadn’t made it past the first round of a Slam in more than a year. Other players might continue on for a while. You can still live a pretty good life losing at tennis majors. But Sharapova has endorsements to think about, and the likes of Nike and Porsche are not paying for people to lose.

Sharapova helped create the idea of the modern athletic brand ambassador. She cleared a path for the Federers, Lewis Hamiltons and, yes, Williamses, rather than the other way around.

It’s there – in shop windows and ad budgets – that she’s the true trailblazer.

Now we’ll see if the empire Sharapova built can survive and thrive after the basis for its creation – playing tennis – is taken away. 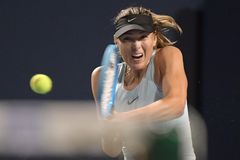