When faced with adversity in her first competitive match in 15 months, Bianca Andreescu recalled how she persevered in some of her big victories in her breakout 2019 season.

It helped the Canadian overcome a stiff challenge in a 6-2, 4-6, 6-3 first-round win over Romania’s Mihaela Buzarnescu on Monday at the Australian Open.

Serving at 3-3 in the deciding set and down love-40, Andreescu reeled off five straight points for the hold and took control of the match from there.

“I have a little bit of a feel of how it is to be in that situation,” she said. “But I was super-relieved to get that game because I’m sure things would have been different afterwards (otherwise).”

Andreescu said it reminded her of a similar three-set win over Angelique Kerber in the 2019 Indian Wells final.

“I was just thinking about that and how calm I was during that match,” she said. “So I was telling myself, ‘Stay calm. Stay cool and just put your first serve in — because I think my first serve today was very effective — which I did.”

A service break followed and Andreescu served out for the win, completing the victory with an overhead smash.

It was part of an impressive 5-0 Day 1 performance by Canadian players at Melbourne Park.

“It’s not a name you want to see in your draw in the first round,” Shapovalov said. “But on the other side, for me, it was fun leading up to the match. When I saw it, I was like ‘OK, this is exciting.’ He’s in great form. I feel like I had two great matches the week before so I feel like I’m in form.

I was excited for it and it lived up to the expectations. It was a long five-set match, which is literally what I expected.”

The 20th-seeded Auger-Aliassime cruised to a 6-2, 6-4, 6-2 win over German lucky loser Cedrik-Marcel Stebe.

It was Marino’s first Grand Slam appearance since 2013 and her first win at a major since 2011. She qualified for the event by winning three matches earlier this month.

“I hadn’t even thought about it being 10 years (since a Grand Slam win),” Marino said. “I’m obviously so, so pleased to come off with that win. To make it through qualifying and everything, really proud of myself and my fighting spirit. I don’t know what to say, I’m a little flabbergasted.”

Marino will face No. 19 seed Marketa Vondrousova of the Czech Republic in the second round. Shapovalov next meets Australian Bernard Tomic, Raonic gets France’s Corentin Moutet and Auger-Aliassime squares off with Australia’s James Duckworth.

Seeded eighth in Melbourne, Andreescu appeared to get a favourable opening matchup in drawing the 138th-ranked Buzarnescu. But the veteran left-hander gave Andreescu all she could handle.

Andreescu looked like she hadn’t missed a beat in a tidy opening set. Her aggressiveness paid off early but Buzarnescu raised her game in the second set, going for more winners and forcing Andreescu into a more defensive posture.

However, Andreescu was poised in the decider and ramped up her play when needed.

Unforced errors were rather high for both players — Andreescu had 34 compared to 29 for her opponent — but the Canadian had a 27-11 edge in winners.

“I don’t want to be too hard on myself,” Andreescu said. “It’s my first match back. I’m just super-relieved that I was able to win today.”

Andreescu tore her left meniscus at the WTA Tour finals in October 2019. The injury hampered her in early 2020 and she declined to return when the WTA Tour resumed play after taking a break due to the pandemic.

Andreescu appeared quite comfortable on court in her return and seemed to be moving well. She mixed her shots up nicely to keep Buzarnescu off balance.

Andreescu, from Misissauga, Ont., will meet Taiwan’s Hsieh Su-Wei in the second round.

Ranked outside the top 150 prior to 2019, Andreescu won three tournaments that year and became one of the biggest stars in the sport. A win over Serena Williams at the U.S. Open made Andreescu Canada’s first Grand Slam singles champion.

After a two-week hard quarantine upon arrival in Melbourne, Andreescu pulled out of a warmup tournament last week on the eve of the competition. She decided instead to maximize her practice and training time for the first Grand Slam of the 2021 season.

Leylah Annie Fernandez of Laval, Que., and Vancouver’s Vasek Pospisil, the other two Canadians in the singles draws, were scheduled to play Tuesday.

Australian Open sees thin Day 1 crowds, but players happy to have fans back at a Grand Slam
February 8, 2021 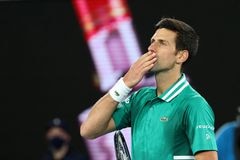 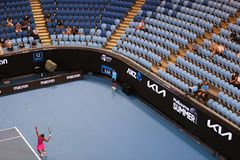