Bianca Andreescu is feeling closer to her old self as she moves on to the quarter-finals at the Miami Open.

The eighth-seeded Canadian, from Mississauga, Ont., clinched her spot at the WTA Tour 1000 event with a 3-6, 6-3, 6-2 victory over the 12th-seeded Garbine Muguruza of Spain on Monday night.

This is Andreescu’s third tournament back after a 16-plus-month absence and she’s trying to recapture the form of her breakthrough 2019 season when she won three tournaments, including the U.S. Open.

“I feel like this [match] was a step closer to feeling as good as I was in 2019,” she said after beating Muguruza Monday. “And I want to just keep rolling like that and feeling really good out there and clutching tough moments.”

With her mom, dad and dog Coco watching from her box, Andreescu broke the former world No. 1 in the first game of the third set and rolled from there, beating a player who already has a title and two runner-up showings this year.

The Canadian, who saved six of eight break points, will face unseeded Sara Sorribes Tormo of Spain in the quarter-finals on Wednesday.

Andreescu broke the hard-hitting Muguruza twice in the second set after not having one breakpoint opportunity against her aggressive opponent in the first.

The second break, putting Andreescu up 5-3, came immediately after Muguruza got back on serve with her own break. A volley by the Canadian touched the tape and went over before an unforced error by Muguruza finished the game, prompting a trademark “Come on” from Andreescu.

Muguruza notched the only break of the first set to take a 5-3 lead and then recorded four straight points on serve to take the opener.

“I knew she was going to come out really, really strong. And that’s what she did,” Andreescu said. “I had to readapt, which I did in the second set, I regrouped and I kept fighting. I changed my game plan a little bit and it worked.”

The 27-year-old Muguruza captured the 2016 French Open and 2017 Wimbledon titles.

Andreescu notched a 6-1, 6-0 win in their only other meeting in 2019 at Indian Wells, Calif. That quarter-final win helped send the Canadian to her first career WTA Tour title.

Andreescu returned from her 16-plus-month layoff following a knee injury in February at the Australian Open, losing in the second round of the Grand Slam.

The 20-year-old Canadian followed that up by reaching the semi-finals of an event in Melbourne for players eliminated early from the Australian Open, but a leg injury suffered there kept her out until Miami.

Since returning from her extended absence, Andreescu’s been working to play without expectations.

“I feel like this tournament, I’m just going with the flow and having fun out there,” she said. “And it’s really showing and I want to continue that because that’s when I play my best tennis.”

Earlier Monday, Canada’s Milos Raonic advanced to the men’s round of 16.

The 12th-seeded Raonic, from Thornhill, Ont., reached the fourth round of the ATP Masters 1000 event for the fifth time in 10 appearances with a 6-4, 7-5 win over No. 20 seed Ugo Humbert of France.

A potential all-Canadian fourth-round matchup between Raonic and sixth-seed Denis Shapovalov was dashed when Shapovalov was upset 6-3, 7-6 (6) by No. 26 seed Hubert Hurkacz of Poland later Monday.

Raonic converted his first match-point chance to win the contest in one hour 39 minutes.

The hard-serving Canadian had 12 aces to Humbert’s nine, and won 77 per cent of his first-serve points.

Raonic is now 2-0 against Humbert after winning a third-set tiebreak last year in Paris.

Shapovalov, from Richmond Hill, Ont., struggled to make the most of his chances against Hurkacz, who saved all three break points he faced. Hurkacz had just one breakpoint opportunity, but cashed in on it to take a 5-3 lead en route to taking the first set.

Shapovalov is now 1-3 against Hurkacz.

Raonic will face the Pole for the first time in their fourth-round contest on Tuesday. 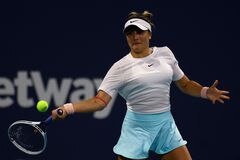 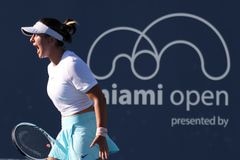 Top-ranked Ash Barty overcomes match point for win at Miami Open
Subscriber content
March 25, 2021
Report an error
Due to technical reasons, we have temporarily removed commenting from our articles. We hope to have this fixed soon. Thank you for your patience. If you are looking to give feedback on our new site, please send it along to feedback@globeandmail.com. If you want to write a letter to the editor, please forward to letters@globeandmail.com.
Comments