As Novak Djokovic conducted yet another in a long string of interviews after earning his record eighth Australian Open championship, runner-up Dominic Thiem was sliding into the front passenger seat of a white tournament courtesy van.

It was past 1:30 a.m. and Djokovic was toting his large silver winner’s cup everywhere, while explaining how he edged Thiem 6-4, 4-6, 2-6, 6-3, 6-4 on Sunday for a 17th major title. Thiem, meanwhile, had just emerged from the locker room, his media obligations long finished.

Thiem was toting a much simpler runner-up tray in his left hand. Just another thing to lug home, along with his rackets, a mesh bag filled with shoes and a plastic sleeve stuffed with sweaty clothes.

It is an all-too-familiar scene nowadays when a Grand Slam tournament wraps up: a member of the Big Three holding court and holding the biggest trophy; a younger man leaving the scene to plenty of praise, but not the triumph he wanted. And, increasingly, the guy with the hardware that’s the envy of all is Djokovic more often than either of his rivals: Roger Federer and Rafael Nadal.

Which, of course, is the point right now. Roger and Rafa need to watch out because the guy whose nickname is Nole is gaining on them. Djokovic has won five of the past seven major tournaments, a run that dates to Wimbledon in 2018.

So as the tour departs from Australia, Federer leads the men’s list with 20 Slam trophies, one ahead of Nadal and, rather suddenly, just three more than Djokovic.

“Obviously, at this stage of my career, Grand Slams are the ones I value the most. They are the ones I prioritize,” said Djokovic, who defeated Federer in the final at Wimbledon last year and the semi-finals at the Australian Open this week. “Before the season starts, I try to set my form, shape, for these events, where I can be at my prime tennis, mental and physical abilities.”

Then he added: “I mean, of course, there’s a lot of history on the line.”

Everyone can decide on their own what should determine who the greatest in tennis history is. Or not — and just appreciate all three of these tremendously successful athletes.

Consider this: Federer, Nadal and Djokovic have won the past 13 Grand Slam titles in a row. (Compare that with the women’s game, where 11 women have divvied up that many majors in that same span; the most recent first-time champ was 21-year-old American Sofia Kenin in Melbourne.)

“These guys,” said Thiem, who’s now 0-3 in major finals, all against Djokovic or Nadal, “brought tennis to a complete new level.”

Djokovic mentioned another category, in which he is approaching a mark held by Federer: most weeks at No. 1 in the ATP rankings.

By winning the Australian Open, while 2019 runner-up Nadal bowed out to Thiem in the quarter-finals, Djokovic regained the top spot. Nadal slides down to No. 2, with Federer still No. 3, and Thiem up a place to No. 4.

Federer holds the men’s record of 310 weeks atop the rankings, followed by Pete Sampras with 286, and Djokovic at 275.

“That’s the other big goal,” Djokovic said. “I put myself in this position that is really good at the moment. I’m super happy with the way I started the season. It kind of sets the tone for the rest of the year.”

Consider that a warning.

Djokovic is the youngest member of the trio, still just 32, while Nadal is 33, Federer 38.

Guess what the next stop is on the Grand Slam calendar? 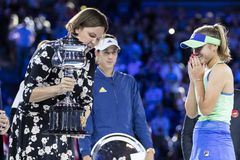 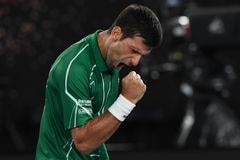