One year ago, Bianca Andreescu arrived at the U.S. Open ranked No. 208 in the world, struggled with back pain and didn’t make it out of qualifying.

This time, the 19-year-old heads to New York as the tournament’s No. 15 seed and one of the most intriguing women in the year’s final Grand Slam. As one of the WTA Tour’s most successful hardcourt players of 2019, some tennis experts even call her a dark horse to win it.

“Being there as a high seed will be awesome,” Andreescu told The Globe and Mail during her brief down time in Toronto after winning the Rogers Cup. “I absolutely love it in New York. Every Grand Slam is special, but I think New York is my favourite, because of the atmosphere at the night sessions. I’d love the opportunity to play in those.”

With a unique variety-packed game, Andreescu slayed Tour stars in Auckland to open 2019, and didn’t stop, running over top-10 opponents on her way to trophies in Indian Wells, Calif., and Toronto. Yet she doesn’t have an abundance of main draw experience at Grand Slams. Her best run is the second-round exit at this year’s Australian Open.

After gutting out her first WTA title at Indian Wells, her audacious entrance soon came to a frustrating halt. She retired in the fourth round of the Miami Open with right shoulder pain, then tried to come back at Roland-Garros, only to have the same injury flare up again and cause her to withdraw from her second-round match. She disappeared from competition for nine weeks and reflecting back now, her coach says she narrowly made it back in time for the Rogers Cup.

“That was a tough time, because this is her breakthrough year, and she was missing all these big tournaments, like Madrid, Rome, Wimbledon,” said her coach, Sylvain Bruneau, by phone this week from New York. “We were all really afraid she was going to miss Rogers Cup, and that would have been really tough on her.”

Andreescu’s shoulder pain began in Indian Wells and grew worse in Miami, where she complained of tightness and throbbing pain down her arm. After that she visited shoulder specialists in Europe and in New York. She had a tear in her right subscapularis – the large triangular-shaped muscle in the front of her shoulder. The teen was sent to Arizona and spent three weeks there having therapy. She worked on her fitness during that time, but not her tennis.

“The break wasn’t easy, sitting on my butt watching everyone else play – I hated that,” Andreescu said. “We were trying to figure out what was actually going on with my shoulder. We didn’t want to keep doing the same thing and expect a different result. Getting lots of opinions was the best decision we’ve ever made.”

“We went very, very slowly, and the practices were not that long or intense because we were trying to be careful with that shoulder. Initially, we said ‘no way, she won’t be ready tennis-wise, this is just not enough practice for a big tournament after all that time off,'” Bruneau said. “Up to about 10 days before the tournament, there was a big question mark. But then, the week before the tournament, things started to go really well in practice.”

They were astounded by how her shoulder held up through six consecutive days of rugged matches at the Rogers Cup – 14½ sets. Her stamina astounded them, too.

“It’s amazing actually and it shows she has talent and the ability to feel the ball after being away from the court that long,” Bruneau said. “Many players lose their rhythm after a long time off, but not Bianca.”

Andreescu’s wide variety of shots is no longer a secret to the WTA’s elite, yet that hasn’t hurt her effectiveness on court. Bruneau is making regular use of analytics as they study opponents, and deepen her understanding of how players react to her.

“She has a great capacity to then go on the court and put it into action very quickly,” Bruneau said. "For a coach, that’s really fun. It’s easy with her because she’s so skillful and has so many tools in her toolbox.”

Andreescu decided to pull out of the Western & Southern Open in Cincinnati – the next stop after Rogers Cup. She rested for a few days with family and friends in Toronto, before starting to train again.

From there, she went to Albany, N.Y., and played an exhibition set against Victoria Azarenka at an all-female multisports charity event called the Aurora Games (a 6-2 victory). There she teamed up with Monica Puig and Sofia Kenin for Team Americas, and they defeated Team World, featuring Azarenka, Garbine Muguruza, and Belinda Bencic.

Now she’s enjoying five days of practice in New York before her first match at the U.S. Open early next week, where she will face 17-year-old American Katie Volynets, ranked No. 407. Andreescu could meet 19th-seed Caroline Wozniacki in the third round, or recent Wimbledon champ and No. 4-seed Simona Halep in the fourth.

Andreescu has had to adjust her goals in 2019 to keep pace with her rapid rise. The new world No. 15 now strives to be ranked inside the top 10 by the year’s end. She is also shooting to be among 2019’s top eight finishers on the Race to Shenzhen leaderboard, which would qualify her to play in China at the WTA Finals in late October.

A solid run at the U.S. Open would certainly propel her in the right direction.

Bianca Andreescu to take a breather after Rogers Cup victory, pulls out of Cincinnati Masters
August 12, 2019 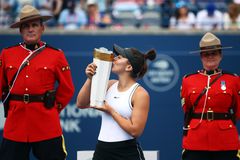 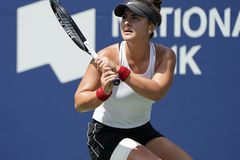 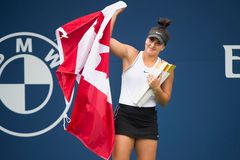