In 2001, former Wimbledon champion Pat Cash was in Mallorca playing in an exhibition tournament.

He was scheduled to face Boris Becker in the closer, but the German withdrew with an injury. Organizers suggested Cash play a local high-school freshman instead.

Cash was 36 years old – retired, but still in his prime.

The kid won the first set. The Spanish crowd was irritatingly delighted. Cash buckled down and won the second. The third set went to a tiebreaker. The kid won.

“I came in the locker room after and the guys sort of looked at me, just to see my reaction,” Cash later said. “And my reaction was I’d just lost to a 14-year-old.”

Of course, the kid was Rafael Nadal.

In the years since, Cash has retroactively amended his disappointment: “I took heart by thinking I had lost to a future Roland Garros champion.”

Losing hurts, but it must hurt a lot less when you do it to Nadal on his favoured surface and in Paris. You can’t regret failing to achieve something you never had a chance at doing.

Thiem, 24, is the flag bearer of tennis’s next generation. That may sound young, but it isn’t in tennis terms. Bjorn Borg retired at 26.

The problem is Nadal and his friendly nemesis, Roger Federer. As long as those two continue on as they have, tennis’ next generation is in danger of becoming the Prince Charles of global sport – aged out of their inheritance.

Along with Tiger Woods, Federer is the emblematic athlete of the 21st century. Nadal is instead all of history’s great specialist.

His winning percentage at the French Open is .977. His 11 championships at Roland Garros alone tie him for fifth-most Grand Slams among mens’ players.

It is now conceivable he will end his career having won more French Opens than any man except Federer has won all majors.

Observers have spent years trying to dissect what exactly makes Nadal so good on clay. He has many advantages – having been raised on it; left-handedness; remarkable movement; his second serve; a mathematician’s ability to construct points and so on and so forth.

But by now, Nadal’s key edge is that he does not believe he can lose. More important, no one else believes they can win.

Federer has conceded the issue by giving up on the clay-court season altogether. At this stage of the Swiss’s career, why bother playing if you’re doing it for money rather than trophies?

Federer managed to sneak in a single French Open title in 2009. That year, Nadal had one of his two – two! – tournament defeats. The man who beat him, Robin Soderling, won 10 ATP titles and made US$10-million in prize money over his career, but he’s best known for a single act of giant killing.

Had he not done it, Federer might not posses a career Slam, and might not now be considered the greatest player ever. It would at least go from an undeniable fact to a decent bar argument.

(Federer owns plenty of houses. He ought to give Soderling one of them.)

With Federer having one-third retired from the game, Nadal has tightened his hold on that piece of territory.

He’s been blighted by injuries throughout his career, but they have not often afflicted him at this time of year. It’s as if his body knows it has to pull things together for a few weeks in May and early June, and is free to fall apart once summer arrives.

After he won for the first time in France 13 years ago, Nadal told The New York Times his greatest concern was losing his grip on reality.

“I hope this all won’t change me,” he said. “I would like to stay the same as I have always been.”

He’s managed that. Although not particularly charismatic off the court, no great modern athlete seems nicer than Nadal. He’s never feuded with anyone, or rubbished an opponent or seemed angry during play at anyone but himself.

In interviews, he has retained the shy courtliness of a well-raised teenager. Most athletes who arrive in their youth get polished up by the star system. By their 30s, they have the shiny look of the professionally styled.

If anything, Nadal, 32, has become less groomed over time. The same crooked smile; an unwillingness to concede he’s losing his hair; an approaching gauntness that suggests he will not fatten in middle age, but wither slightly. He’s got a 50-year-old head on a 21-year-old body, in both the literal and metaphoric senses.

He has grown more wistful over the years. These victories get hold of him in a different way. His celebrations were muted on Sunday. He cried, but just for a moment.

The closest he came to flashing some edge was in congratulating Thiem: “I’m sure you will win here …” – an almost imperceptible pause – “… in a couple of years.”

In other words, “whenever I decide to call it a day.”

There was a moment around 2016 when it appeared Novak Djokovic was the new king of clay. But the Serb fell off and Nadal reappeared. He’s not just playing as well as he ever has. He’s playing better than that.

Getting to 10 French Open wins last year was one sort of finish line. It has allowed Nadal some emotional distance.

“I know the years are going quick,” he said before Sunday’s final. “There is not 10 more chances to keep playing here.”

But surely four or five? Once he feels the end rushing up on him, he can pull a modified Federer – giving up on grass – or hard-court majors in order to hoard his strength for just one.

Whatever he decides, his legacy is already secure. Titles are only part of it.

Perhaps more than any player of his generation, Nadal did not allow stardom to change him.

He was tapped for greatness at 14. All he’s done in the two decades since is prove people were right. 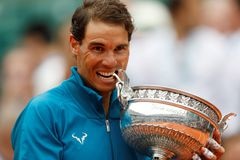 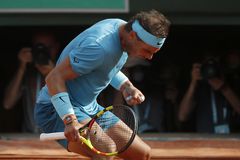 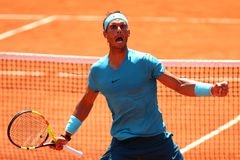