Last week, on her run to a second pro-level tournament final in two weeks, Leylah Annie Fernandez committed a minor breach of tennis etiquette. After taking out fellow Canadian and world No. 224 Françoise Abanda in the semi-final at the Granby Challenger, Fernandez, who had just won arguably the biggest match of her career, ran over to hug her father before heading to the net to shake hands with her opponent.

Convention would suggest the order of those two actions should be reversed, but considering Fernandez is only 16 and that the celebration totalled about 12 seconds, it was easy to shrug off as harmless inexperience.

Abanda did not see it that way. Perhaps feeling slighted by the celebration, or simply stung having been beaten by the teenager twice in two weeks, she took to social media to educate her young compatriot on proper manners.

“I waited at the net, but Leylah was busy celebrating with her team. You’re supposed to shake your opponent’s hand before your coach,” Abanda wrote on twitter.

If she continues her ascent through the WTA rankings, it probably won’t be the last time Fernandez runs afoul of a higher-ranked, more-experienced player. After Angelique Kerber called Bianca Andreescu a “drama queen” following defeat to the then-18-year-old in the final at Indian Wells, it almost feels like a rite of passage.

On the heels of her success at back-to-back Canadian events this month, which included her first pro tournament victory at the Gatineau Challenger and runner-up at Granby, Que., Fernandez rose 115 spots to No. 272 in the world when the WTA put out its rankings Monday.

That keeps her goal of cracking the top 200 this season within reach. After being granted a main-draw wild card on Wednesday, she’ll get another chance to eat away at that margin at the Rogers Cup in Toronto, which begins next week. Fernandez, who won the French Open junior girls title earlier this year, will face a qualifier after being given a wild card into the tournament.

“I want that,“ Fernandez said during an interview in the midst of her winning run at Gatineau. “Top-200 ranking. [Make the main draw at] French Open, Wimbledon. That’s what I want to do. Progress, little by little.”

Incremental progress would be a change for Fernandez, whose past year has been full of firsts.

She inked an apparel deal with Asics in the fall; reached the final of the junior Australian Open in January; and took the junior French Open title in June.

Since then, she’s signed with an agent, began working with a new coach and won her first pro tournament. Media requests have poured in. Responsibilities, on and off court, have piled up.

Until recently, her father, Jorge, had been managing most aspects of his daughter’s career, including coaching. But with another daughter on the rise in the junior ranks, the workload is now too much.

“The attention has grown to the level where I can’t manage it any more,” he said. “We have to stay focused on what got the attention in the first place.”

If it all sounds like a bit much for a teenager, don’t worry. Fernandez says she still finds time to do normal kid stuff. Such as … watching Murdoch Mysteries while knitting?

“This is a weirdo. A 90-year-old trapped in a 16-year-old’s body,” Jorge says, nodding toward his daughter.

She rolls her eyes.

There is a palpable bond between Jorge and Leylah, who despite travelling year-round with her dad by her side insists she never gets sick of him. Their closeness makes those long road stretches a bit easier, when they might go as long as a month without seeing Leylah’s mom, Irene, or sister Bianca.

The family’s total commitment to their daughters’ tennis careers has stretched them thin. With Jorge devoting all of his time to coaching his children, Irene is left working full-time.

The family moved from Laval, Que., to a small apartment in Delray Beach, Fla., where the sisters share a bedroom. Living in Florida, a global tennis hub, gives them nearly endless year-round access to public courts, so they don’t have to pay for court time at a private club.

The Fernandez family was the subject of a recent Radio-Canada documentary that explored the challenges of raising a nascent tennis star on a tight budget.

In it, Jorge, who immigrated to Canada from Ecuador as a child, reveals he has no retirement savings and the family doesn’t own any property. “We have nothing, really,” he says. “What we do have, we devoted to tennis.”

Growth in the game won’t be cheap

Tennis Canada has stepped in and contributed financing for Leylah, despite her development outside the national body’s traditional system.

That money went toward paying for coach Dave Rineberg, who joined the Fernandez camp on a trial basis for Leylah’s Canadian swing. The financing also helps offset the cost of travel, in which a player may have to hop from one country or continent to the next on a weekly basis.

“She’s going to turn pro and we’re going to need some heavy financing,” Jorge told the Montreal Gazette shortly after the junior French Open win. “This is going to turn into a numbers game, and that’s a whole different problem we’re going to have to face. We need a team for her at some point.”

Getting an agent brings someone into the fold who can seek out new sponsorship and marketing opportunities.

Jorge says some of his daughter's commercial appeal comes from her ability to speak three languages. She is fluent in English, French and Spanish, having grown up speaking French at school in Quebec while picking up Spanish at home from her dad. English is her third language, which she learned by speaking with her mother, who doesn’t speak Spanish or French.

The bigger pay days, however, come with tournament wins.

Fernandez’s victory at Gatineau netted her US$3,935, while her finals appearance in Granby generated US$6,518. The real money starts rolling in when a player begins playing at WTA events, where prize pools swell into the millions of dollars.

A first-round appearance at the Rogers Cup will earn her about US$8,000, which is almost half of her entire earnings this season.

Learning to enjoy the ride

Sitting in a tent in Gatineau ahead of an evening match, Fernandez, dressed in all blue gear (her father, sporting the same brand, head to toe in red), is asked what it was like to watch 15-year-old American Cori Gauff make her historic run through Wimbledon a few weeks earlier.

By this point in the conversation she had let her father do most of the talking. But at the topic of Gauff, she perks up.

Fernandez fell to Gauff in the junior French Open only last year, so it was easy to imagine having that success herself, she says.

On the one hand, she was happy for her. On the other, it was motivation.

Jorge knows it’s a cliché, but he reminds his daughter that it’s not necessarily about the destination. He wants her to actually be a teenager and enjoy the ride.

“She’s an old soul. There’s something oddly mature about her and what she wants to achieve,” Jorge says. “I tell her all the time, ‘It’s about the journey. One day you’ll tell your kids about the experiences. Travelling the world.’ ”

Fernandez nods her head, but again, doesn’t engage. It’s only when the topic of conversation returns to tennis that she takes interest.

Asked about winning a junior Grand Slam, she offers the same humble platitude you would expect from any polite young person.

But on the issue of losing, she sits up straight and then leans forward. Her voice rises for the first time.

“Losing. That’s devastating,” she says with wide eyes. “Because I just know, there are so many things I could improve on to make me better. I can never wait to get back out there.” 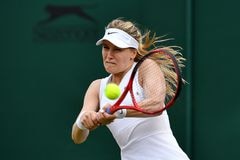 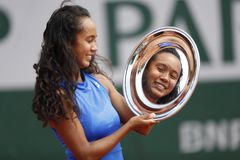