Now, near the end, you’re beginning to notice all the little things Serena Williams does differently than everyone else.

She doesn’t bring a towel out onto the court. She accepts the first ball she’s tossed before a serve, and always uses that one. She doesn’t sprint out of the umpire’s instructions huddle, but instead trudges back to the baseline.

Always a singular athlete, Williams’s tendency to do it her own way has been made poignant by age and decline. She is still dangerous, but no longer feared. That’s a tough spot for a 37-year-old pro to find herself.

She won Tuesday’s quarter-final. Barely. More by force of will than force alone, which is the most part of what Williams brings to bear these days.

Facing the tournament’s surprise package, journeywoman Alison Riske, Williams came out with her engine in idle. She now brings to mind an athlete such as Lionel Messi – she doesn’t move anywhere fast unless she has to.

Her elite side-to-side mobility is gone, taken by age and recurrent injury. She depends on a combination of aura and power to undo opponents.

Having got much further than she’d expected, Riske wasn’t inclined to fold out of politeness. Williams left it to 3-3 in the third set to get started.

She tied up her great burst of hair into what she later called her “business bun.” Then she began running for the first time. She won the last three games, the match and the screaming competition.

That may sound good, but it’s not even close to true. Williams is so close to putting the “greatest ever” discussion to bed and just as close to the end of her career, that the combination should be adding up to a sense of extreme urgency.

If so, her decisions this fortnight are curious.

As you watched her stalk about the court on Tuesday in energy-conservation mode, the choice to take on extra work doesn’t look so hot. It seemed especially not hot after rolling her ankle in the quarters.

It is wonderfully whimsical that Williams is playing mixed-doubles with Andy Murray. The tabs are loving it.

But had she lost to Riske – and it was very close – she’d look a bit feckless now. This is the first time she’s been healthy all year. Why play loose with that opportunity? What’s the upside?

If you’re Williams, nobody is going to remember a Grand Slam doubles title you won a week after you’ve won it. She already has 16 of the things and the only person who cares about them is the guy who builds her custom trophy cases.

With her physical resources dwindling, a total push for Margaret Court’s career singles Slam record (24) would seem in order. Williams is one major from tying it, two from owning it.

After that, she could enter her Jimmy-Connors-cha-cha-cha-ing-into-sunset phase and play for fun. Though that would also be a hard thing to understand her doing.

What separated Williams from her peers was more than skill and physicality. It was her intense need – not desire, need – to win.

In her autobiography, Maria Sharapova recalled beating Williams in a Wimbledon final. Afterward, Sharapova said she heard Williams weeping in the locker room.

“Guttural sobs,” as Sharapova described it.

This was many years ago and they were both very young, but according to Sharapova, Williams has never forgotten being seen in her weakest moment. She has utterly dominated Sharapova since. In a sense, Sharapova ruined Williams’s tournament, so Williams ruined Sharapova’s professional legacy.

Every great athlete gets simplified in the popular imagination once they’ve quit. Over years, their contours are rubbed flat and they are reduced to a single idea. Bjorn Borg was emotionless. Andre Agassi was troubled. John McEnroe was angry. It’s not entirely true, but it’s mostly true.

Williams has an enormously varied and appealing personality, but when that happens to her, she will be remembered as a human ice pick in search of a skull. She didn’t want to beat people who’d crossed her. She wanted to destroy them. Ask Sharapova. Ask Martina Hingis.

She’d still be at it, but over the past 10 years, women’s tennis has been denuded of anyone you might describe as a “champion.” Williams got rid of them all.

Amid all the narratives Wimbledon throws up, there has been an allegory linking Williams and 15-year-old U.S. prodigy Cori Gauff. Without saying it out loud, people seem to agree that Gauff has arrived so that Williams can begin to leave. It’s simplistic, but that’s how the best stories work.

“I’ll always look up to her until we one day face each other on the other side,” Gauff said of Williams. “Win or lose, I’ll still look up to her.”

Gauff was being complimentary. But if a Grade 10 student who hadn’t played a major a week ago talking out loud about beating you doesn’t tell Williams that people believe the end is nigh, nothing will.

After the Riske match, Williams nonetheless continued to “Zing!” her way through this.

“I definitely felt a lot more pressure as I got older,” she said. “Now that I am past older, I feel a bit less pressure.” Cue the laugh track.

People seem to like this Williams – the no-worries Williams, the every-day-is-a-blessing Williams. This version is certainly less up in everyone’s face than the old one used to be. Even as recently as blowing her internal fuse box at last year’s U.S. Open.

This new Nicey-Nice Williams is like everyone else in the women’s game. Saying nice things about all the nice people. This is a woman who used to bury bodies in her news conferences. This was the sport’s great individualist and iconoclast.

What I would find nice is seeing that other Williams at least once more in a Wimbledon final, before it’s too late for any sort of Williams on a tennis court. 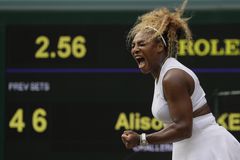 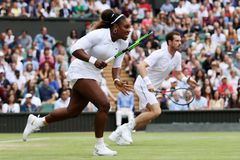 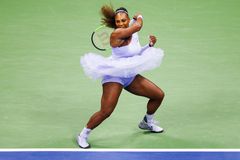