After finally putting an end to the whole idea of the Big Four in men’s tennis, Félix Auger-Aliassime was still showing a respect that is no longer due.

“In the back of your mind, you know you’re facing Andy Murray,” the 20-year-old Montrealer said after winning his second-round match at the U.S. Open on Thursday night. “You never know what tricks he has in the back of his pocket.”

No tricks, as it turns out. I’m not sure the man has pockets any more.

A large part of Murray’s reputation was based on his ability to return serve. He’s one of the greats in that regard. Against Auger-Aliassime, Murray had no break points and no break opportunities. He went down 2-6, 3-6, 4-6.

That isn’t losing. That’s being wiped out.

Murray is in the midst of a comeback no one really wanted. He’s tottering around out there on a metal hip, trying to reassert himself in a game that has passed him by.

A generation ago, the Scot would have had the sense to quit. He’s 33 years old and already half-bionic.

Thirty-three used to be ancient in men’s tennis terms. Pete Sampras quit at 31. Boris Becker was the same age when he called it a day, and he hadn’t mattered much in years.

Maybe recency bias is to blame here. The Roger Federers, Serena Williamses and Tom Bradys of the world have convinced Murray that it is quite reasonable for humans to operate at their physical peak until 40.

As anyone who has ever been 40 will tell you, that is a dirty lie.

At this U.S. Open, we are finally beginning to see the reality of time reassert itself.

By Friday, the oldest remaining player in the men’s singles draw was reigning champion Novak Djokovic. He’s 33 and a half. But I understand he can turn bilge water into vitamins using only the power of his brain, so he has an advantage.

Federer is MIA because of knee surgery. Rafael Nadal is taking a pass because of COVID-19.

This was the year the old guard stood down. We are left wondering what they’ll look like whenever they decide to stand back up.

Men’s tennis has spent years waiting for the situation at the top to change. It finally is, if incrementally. Murray’s done. Federer is on his way out. Nadal has to be close behind. It just stands to reason. (And, yes, that one has been written before. Many times.)

On a nice, local note, Canada is a major storyline in whatever change is occurring. Three Canadian men (Auger-Aliassime, Denis Shapovalov and Vasek Pospisil) made it through to the U.S. Open’s third round this week. That had never happened before.

It might’ve been four had Pospisil not advanced via some Canadian-on-Canadian crime, making Milos Raonic look old and creaky.

Raonic’s only finish line now is a major title. The only one left to play is the French. Which means Raonic’s season is effectively over.

He’ll be 30 when they start up again. Just last year, you’d have said, “Thirty? Is that all?” But 30 is starting to feel like the other side of the mountain again. Especially when you are a spindly 6-foot-5 and playing a sport that puts more G-forces on your joints than a rocket launch.

Raonic is no longer mid-career. He is well into the second half of his tennis journey. His time no longer seems like ‘right now’. It feels as though it was the Wimbledon final in 2016, the one in which he ended up being overcome by the moment against Murray.

Imagine where Canadian tennis would be now if that match had gone the other way?

Instead, the breakthrough was left to Bianca Andreescu, who won the women’s title at the U.S. Open last year. We are about to see if tennis majors are like four-minute miles – you have to see that it can be done in order to be able to do it yourself.

Regardless, Auger-Aliassime is now always going to be the most obvious threat. He was shaky in his opener, then dominant against Murray. Within a few days, if it gets that far, he’ll likely have to get past Dominic Thiem.

Thiem has been tennis’s No. 1 contender for what seems like a hundred years now. The Austrian is 27 and hasn’t won anything that matters. By that age, Bjorn Borg had already been retired for a year.

Like so many of his cohort – Raonic being one of them – Thiem seems scarred by his unlucky place in the tennis timeline. He is consistently brilliant right up until he convinces a few people that he’s finally figured it out. Then he plays as though the point is to put the ball through the net, rather than just over it.

Someone on Auger-Aliassime’s side of the bracket is going to get their chance against Djokovic. You’d like to make that last sentence conditional, but you know in your bones it isn’t. Djokovic may be a bit of a wing-nut, but he is also as guaranteed as government bonds.

It’s got to the point where you don’t admire the Serb’s consistency so much as you are confused by his ability to keep himself interested. Surely, even he must get bored by how good he is.

That’s all you’re hoping for now – some change, something a little different. This U.S. Open is an advance look at what men’s tennis will look like in its next iteration. And so far, that’s not very compelling. It’s a bit of a battle royale out there – a whole bunch of guys swinging chairs at each other.

We still need to figure out the rivalries, the must-see encounters, the running feuds. The women’s side has Serena Williams and her march to 24 Grand Slam titles. What does men’s tennis have? Djokovic plowing over the field like this is a monster truck rally.

It’d be a nice change if someone found a new script, never mind flipping this one. And it would be something special in an otherwise desultory sports year if that someone wore the Maple Leaf. 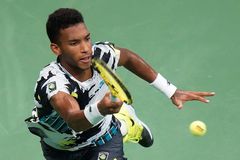 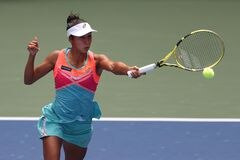