You may not have heard much about Canadian rising tennis star Denis Shapovalov since his intriguing Rogers Cup debut last month, but big things are certainly happening.

This summer, 17-year-old from Richmond Hill, Ont., won the Junior tournament at Wimbledon, upset his first Top 20 ATP player at the Rogers Cup, saw his world ranking skyrocket and swiftly left the junior ranks to chase a pro career. This week, he was named to his first Davis Cup team and signed a sponsorship deal with BioSteel, where he joins a stable of Canada's most prominent young pro athletes, including Connor McDavid, Andrew Wiggins and Brooke Henderson.

But Shapovalov is not competing in New York this week at the Junior U.S. Open with Canada's other highly ranked juniors, such as Montreal's Félix Auger-Aliassime or Mississauga's Bianca Andreescu. He's been training at home, where his mother owns the TessaTennis academy. Monday, he was at York University's Aviva Centre, practising with coach Adriano Fuorivia as reps from BioSteel clicked photos of him and had him signing merchandise.

Since his memorable upset of a less-than-stellar World No. 19 Nick Kyrgios in the first round at the Rogers Cup, Shapovalov played in two events on the ATP's Challenger Tour, both in Quebec. He made it to the quarter-finals in Granby, then the semis in Gatineau, and he was a key attraction at both, often given marquee night match times. He is now ranked No. 246 in the ATP men's singles world rankings – the highest-ranked player in the 17-18 age group – a massive leap from his pre-Rogers Cup rank of No. 370.

While he remains No. 4 in the ITF junior boys' world rankings, he has stopped playing junior events in favour of Challengers. He hopes to further boost his pro ranking and earn opportunities to play events on the ATP Tour through qualifiers or wild-card invitations. His goal is to earn his way into January's Australian Open. He plans to start with Challengers in the United States this fall.

"Playing the Junior U.S. Open wouldn't have benefited me too much – if I won or lost. Pro experience is more important right now," said Shapovalov, sitting down with The Globe and Mail at the Aviva Centre.

"I thought it would be tough to transition to Challengers after my experience at the Rogers Cup – to go from playing in front of so many people to playing in front of small crowds and playing for myself again – but I did well. I've been playing with a lot of confidence since Toronto."

The promising youngster appealed to BioSteel. He had been using their sports nutrition drinks dating back to 2014, when his coach bought some of their drink powder and mixed it up for the youngster to drink every two hours on the lengthy flight to play the Junior Australian Open. Back then, the little-known player and his coach contacted BioSteel to let them know he liked the stuff, which planted some informal seeds for their relationship.

Fast-forward to this summer, and Shapovalov became an ideal candidate to join BioSteel's team of sponsored athletes – all youngsters with Canadian links and big things to come. Henderson, at 18, is a major-championship winner on the LPGA Tour; Wiggins, 21, is heading into his third season and emerging as a bonafide NBA star; and McDavid, 19, might well be the future face of the NHL. BioSteel has signed Toronto Blue Jays 25-year-old starter Marcus Stroman, too, who although not homegrown, has woven himself into Canada's sports fabric in the past year.

Before it signed the youngster, BioSteel invited Shapovalov to come watch a commercial shoot it was doing with Stroman, McDavid, Wiggins and Dallas Stars centre Tyler Seguin.

"Denis was just watching, taking it all in, and Stroman was showing all the guys how to throw some pitches. Denis just really fit in," said John Celenza, BioSteel's co-founder and chief executive. "He is young, upcoming and exciting, and I think that really matches the other athletes on our roster. He'll eventually be in our commercials, too – probably next year with the other athletes. He's someone we definitely want to feature."

On Tuesday, Tennis Canada named Shapovalov to the four-man team that will take on Chile in its Davis Cup World Group play-off tie with Chile in Halifax next week, along with Vasek Pospisil, Daniel Nestor and Frank Dancevic. World No. 6 Milos Raonic won't play due to some lingering effects of the cramping he suffered during his second-round match at the U.S. Open last week.

"It's so exciting for me to be one of the four guys on this team, at my age, and to go to Halifax with the pros," said Shapovalov. "I'm not sure what I'll play – singles, doubles – and I won't be too upset if I don't play at all. Maybe they'll just have me watch since it's my first time going. Of course, I really, really want to play, though." 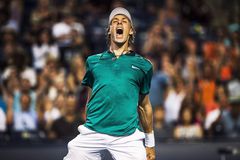 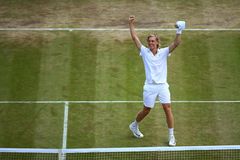