Mid-afternoon on Sunday, little-known professional tennis player James McGee found himself in a dream scenario on Court 1 at Aviva Centre in Toronto.

Up 5-1 in the deciding set during the final round of qualifying for the Rogers Cup, and needing to win only one more game to advance, the Irishman was suddenly and improbably the heavy favourite. With his opponent serving at 30-30 in the seventh game, it looked as if McGee might not even have to serve it out. "Just two points away," as they say.

A win would be huge for the 29-nine-year-old McGee, who is an underdog in every sense of the word. Ranked 342nd in the world, he personifies the struggle of the journeyman. Instead of staying at five-star resorts with an entourage of coaches, physios and psychologists, he sometimes bunks in hostels, sharing a room with his coach.

Handsome in a boy-band sort of way, McGee has spent much of his career competing in the tennis netherworlds, playing the lower-tier Challenger and Futures events a universe away from the glamour and big money of the Grand Slams and Masters 1000 tournaments.

Even competing in late-stage qualifying at an event such as the Rogers Cup is a rarity for McGee: He had never qualified for a Masters 1000 main draw.

In fact, no Irishman had ever made it that far. McGee wears his patriotism literally on his sleeve – wristbands in the colours of the Irish flag, green strings in his racquet and green tennis shoes.

In qualifying, or "qualies," players whose rankings aren't high enough to automatically gain entry into the tournament duke it out for a handful of main-draw spots. Two wins are needed. McGee won his first match in a tight three-setter on Saturday against Sam Groth, a former top-25 player from Australia, who holds the world record for fastest serve ever recorded.

Not giving in, Tim Smyczek, a lean and fleet-footed American ranked 119th, and McGee's opponent on the second day, swatted away the two final points of the seventh game to narrow McGee's lead to 5-2.

The Irishman headed to the changeover knowing he'd still have two opportunities to serve it out. On paper, it was a nearly unassailable lead.

Tennis, however, has an unforgiving scoring system. It isn't enough to win the majority of points, or the majority of games. Nor is there a clock that ticks down to end the misery when things go awry. No matter how much you dominate your opponent in the early going, it's not over until you get over the finishing line in the final set. Players have to hold their nerve and concentration right until the last point. Which means they can never relax.

In the next game, Smyczek broke McGee's serve to get to 5-3. No real reason for panic yet; McGee had one more chance to serve it out. In the ninth game, he reached match point on Smyczek's serve. But he didn't finish him, and Smyczek pared it back to 5-4.

The crowd sensed that the psychology of the match had turned. When the umpire announced "time" after the changeover, of the two players, it was Smyczek who seemed the more charged up. The stress and strain were all over McGee's face, and he was cramping. Early in the 10th game, he got a time violation for taking too long between points. Another violation and he'd have a point deducted.

Doggedly, McGee earned a match point on his own serve. Surely this time.

His first serve missed the mark. On a second serve, the chances of the server winning the point drop dramatically – the second is a safer, slower shot. But the point never even gets played out. McGee double faults. Another match-point blown.

And that was as close as he would get. In a flash, Smyczek broke back, held his own serve and broke one last time. McGee goes down 7-5, meekly in the end. It was agonizing to watch.

As he made his way to shake hands with the the umpire, McGee shook his head in disgust and disbelief. As Smyczek beamed and basked in the rapturous applause, McGee appeared shellshocked. Gamely he posed for a few "selfies" with fans, but he was unable to muster a smile.

The writer is not related to James McGee. 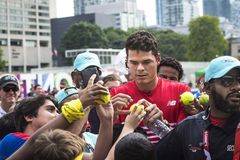 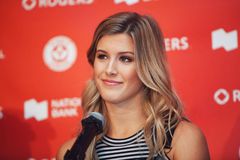