When tennis star Maria Sharapova was caught six months ago taking the banned performance enhancer meldonium, she had but one high-profile sympathizer – her noted professional enemy, Serena Williams.

Sharapova got out ahead of the story by admitting what she'd done in a media-conference setting before her test results could be announced. She took the since-discredited line that the drug was being used to treat a heart ailment. This was before it became clear that a passel of Russian athletes – everyone from individual Olympians to an entire junior hockey team – curiously shared the same affliction.

Almost alone, Williams was willing to throw her rival the benefit of the doubt.

"I think most people were happy she was up front and very honest and showed a lot of courage to admit to what she had done and what she had neglected to look at in terms of the list at the end of the year," Williams said.

(Sharapova and others were apparently taken unawares when meldonium was added to a list of banned substances beginning this year.)

That was a class move for which Williams was rightly applauded. Then, unwisely, the greatest women's tennis player of all time went further.

Asked her own position on taking supplements of any kind, Williams pronounced herself "terrified" of the idea.

"Just even from a health perspective, I've never been a big fan of taking anything," she said.

It's a cleverly worded denial – "not a fan of" rather than "I don't do it as a rule" – because we now know that Williams is willing to take some stuff.

This week, a Russian hacking collective called Fancy Bears accessed the medical archive of the World Anti-Doping Agency. The hackers have begun posting the Therapeutic Use Exemptions given out to several major names in sports, including Williams.

The woman who pronounced herself terrified of wheat grass and protein shakes has, in recent years, taken powerful painkillers and anti-inflammatory medicines that can function as performance enhancers – oxycodone, prednisone and similar drugs.

There is no suggestion Williams broke any rules. In each case, she was provided with a note from a doctor – the man who oversees the International Tennis Federation's anti-doping program, Dr. Stuart Miller.

It is an unusual set-up – the same guy charged with ferreting out the people who use banned drugs also handing out PED hall passes. Who gets them? And on what basis exactly?

Miller told The New York Times that the ITF receives about 100 requests for exemptions each year, and passes about half of them. Beyond that, we have no idea how any of this works. That institutional opacity makes the current leak seem worse.

It's not proof of anything. It's not necessarily even the suggestion of anything, but it certainly doesn't look good, does it? Because that's all that matters here – the sense of, "Oh, great. Here we go again."

When the PED crisis began in the 1980s, the party line was a flat denial. Since then, it has morphed into a smug shrug. The clean athletes cannot help but sigh at the perfidy of their (usually suspiciously foreign) colleagues, and always at maximum volume in front of a microphone.

To hear them tell it, they're so pure they pee spring water. Except we're learning that many are not. Whether you take a banned substance for a good reason under doctor's orders or take it in the laundry room late at night after ordering it from an online Mexican pharmacy, you're still taking a banned substance.

Most of the athletes stung thus far have had their narcotic-come-to-Jesus moment, and rushed to embrace their infirmities.

"Having ADHD, and taking medicine for it, is nothing to be ashamed of, nothing that I'm afraid to let people know," the overwhelming star of Rio 2016, gymnast Simone Biles, tweeted after she was named.

She's right and she's wrong. It is nothing to be ashamed of. But if you weren't afraid to let people know about the drugs you were on (as opposed to the condition you suffer from), you would let them know.

There is, of course, no onus on Biles or anyone else to share their medical information. But let us not pretend that taking meds that can conceivably give you a competitive advantage is somehow an act of heroism.

Like all the rest, Biles lives in a world in which the suggestion that you consume anything but rainwater and leafy greens is shabby. This is the tedious result of that holier-than-thou'ism.

Though the athletes are the ones being publicly embarrassed, the hardest light rightly falls on WADA (the World Anti-Doping Agency). That wretched and increasingly pointless agency has mastered a real management trick – its actual function is in direct opposition to its stated mission.

WADA was founded to clean up sport. Instead, it has cretinously abetted a state-sanctioned cheating scam in Russia, and now, apparently, creates rules that are routinely bent and/or broken behind the scenes.

What is the point of a banned-substances list if the right person with the right connections to the right doctor can obtain and then legally use them in secret?

If your answer is the one Stuart Miller gave this week – "Anybody who is an athlete and is subject to an antidoping program, like the Williams sisters, is subject also to getting ill and having medical conditions" – there's a simple solution for that: don't compete.

Declare your condition, get the exemption and then sit out for a proscribed length of time. Call it a voluntary drug suspension. Otherwise, what does "banned" mean?

Instead, we will continue twisting ourselves into logical knots trying to paint it one way – "Nobody's on anything" – and have it another – "Everyone's on something." This is the problem with all testing regimes – all they prove is their own ineffectiveness. How are they supposed to combat foreign security services such as Russia's FSB – the prime mover behind the great Sochi cheat – when they can't even keep their own files safe?

While WADA futzes about, I continue to believe that a great number of elite athletes find their way around the rules, one way or the other. Fancy Bears' illegal data dump is just the latest proof.

Maria Sharapova to find out decision on doping appeal in October
September 13, 2016 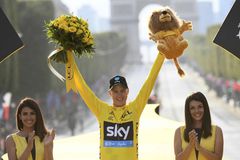