Rusedski was then at the peak of his powers and looking for a practice opponent ahead of a minor tennis tournament. His coach set him up with a 16-year-old junior player who had nothing better to do. That was Federer.

"I was ranked No. 5 in the world, and he was beating me all over the court," Rusedski wrote.

This is the top rung of athletic achievement – when your contemporaries talk about losing to you with more pride than they take in having beaten anyone else. They are like rich men who've kissed the hem of a saint's garment.

Only a few have inspired this quasi-religious awe. Pele was one of them. After he scored a goal in his last World Cup final, the defender he put it over, Tarcisio Burgnich, said, "I told myself before the game, he's made of skin and bones just like everyone else. But I was wrong."

Beyond the Brazilian – and taking into account the world as a stage, rather than any one corner of it – the list is perishingly small. If you remove well-intentioned parochialism, the only others who should be included are Michael Jordan, Usain Bolt and Muhammad Ali.

Federer has been the best player in the history of tennis for ages, but on Sunday he joined the highest rank. After winning an eighth Wimbledon title and a 19th major overall at the unlikely age of 35, the Swiss must now be considered among the greatest athletes of any sort in history.

The match itself was unremarkable. In a portentous video montage leading into the contest, Federer was unsubtly likened to Jesus Christ. Then the flogging began.

The horse in this case, Marin Cilic, was dead within the first 30 minutes. Federer beat him for another hour or so in between Rolex commercials. It ended 6-3, 6-1, 6-4.

At one point, it got so bad that the Croatian burst into heaving sobs during an injury timeout. He received no treatment at that time. Two medics spent the entirety of the break consoling him.

"It didn't hurt so much that it was putting me in tears," he said. "It was just that feeling that I wasn't able to give my best."

I suppose we have to believe him, but who could blame Cilic for crying whatever the reason? Playing Federer in his current form and in his preferred venue is like dreaming your whole life of racing the Indy 500, then finally getting there to find they've bricked up the finish line.

Afterward, Federer shed his own tears. He does that regularly now. Though his legs seem a long way from giving out, he's already reached the emotional stage of an extended farewell. In a small demonstration of decency, he waited until he'd got back to his chair to weep, lest he show up his opponent.

Once he'd composed himself, Federer reverted to personality norms. He's always possessed a special brand of arrogance – the gentle sort that leaves no bruises.

"You did as good as you could," Federer told Cilic during the post-match, on-court interviews. "I hope we can play down the road some better ones."

Like Ali or Bolt, only he could say it this way and know it wouldn't earn him any enemies or be taken for rudeness. Federer's earned the right to tell you the truth – that while you may be good, you aren't good enough for him.

It's tempting to think of Federer like most modern sportsmen – as a brand. He certainly sells more stuff than most. But he stands in the global mind for something loftier.

In a 2011 poll asking people around the world to rank popular figures, Federer finished second behind Nelson Mandela as the most reputable person alive. The Dalai Lama finished 13th.

These sorts of exercises are by their nature fickle and often foolish. However, it captures something important about his appeal. Like Shakespeare, Federer's manner of expression translates well into all cultures.

People want heroes, but they are in short supply. Everyone has a fault, a dark lever into their psyche that makes them seem less than whatever they've accomplished. Everyone has their bad patches and many of us handle them poorly.

Federer didn't do that, even as he was losing on the regular. He'd go calmly into news conferences after another disappointment and say something like, "I hope to be better next time."

Again and again, pressed to justify himself, Federer said he still played the game only because he wanted to. It was easy to believe because he has so much money and his legacy was already ensured. He never got to the point of looking out of his element (as Ali and Pele both did), but he had moments of averageness. Yet he continued.

Most of us who watch professional tennis do not understand its tactical intricacies, but know how it feels to lose. Federer took us to the very top of the game and then allowed us to ride back with him into the middle. It's easy to admire an athlete in their brightest moments, but you only love the ones you've watched struggle.

Ten years ago, Federer was a prodigious force. Had he left then, he would've been Bjorn Borg – widely acknowledged and little felt.

His longevity, his struggle and his renaissance have made him truly legendary. For people of a certain age, Federer is the famous person who helped define the parameters of your life. You remember where you were when he did such and such. Though Sunday's match was not memorable on any sporting level, you'll remember it, too.

Alongside titles, statistical superlatives and good grace, that's the test of athletic greatness – that you have created signposts in history that all of us can use to mark our own passing. 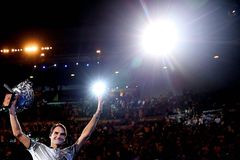 Kelly: Who’ll care about tennis once its senior stars are gone?
May 28, 2017
Follow us on Twitter @globeandmail Opens in a new window
Report an error Editorial code of conduct
Due to technical reasons, we have temporarily removed commenting from our articles. We hope to have this fixed soon. Thank you for your patience. If you are looking to give feedback on our new site, please send it along to feedback@globeandmail.com. If you want to write a letter to the editor, please forward to letters@globeandmail.com.
Comments