Raonic, who won the Brisbane title in 2016 and reached the Wimbledon final that year, struggled to find rhythm with his usually booming serve in a 6-4, 6-4 loss to the Australian wild-card entry.

De Minaur pressured Raonic with his relentless service returns, made just one unforced error and only dropped serve once – when serving for the match at 5-2 – en route to the biggest win of his career.

The victory put De Minaur into a quarterfinal match against American qualifier Michael Mmoh, who upset No. 8-seeded Mischa Zverev 6-2, 5-7, 6-4.

"It's going to take a while for me to believe what's happened just now," De Minaur said.

Raonic was playing his first match since October after taking time out to deal with injuries that also ruled him out of the U.S. Open last year, when his ranking slipped to No. 24 – 21 spots lower than his career-high finish in 2016.

"I sort of played into his comfort zone. I didn't do enough to pull him out of it or, when I did, it would be only for a few points at a time. I wasn't consistent enough and that's sort of what cost me."

Raonic saved double break points in his first two service games in the second set, but was finally broken in the fifth game when De Minaur challenged a call on a second serve, got it overturned to win the point on a double-fault, and won the next two points on the back of some impressive returns.

De Minaur broke again in the seventh game and, after missing the chance to close out in the eighth, the former Wimbledon junior finalist held his composure to close out.

Asked how he unsettled one of the better servers in tennis, De Minaur said he threw out the playbook.

"I was just guessing really, I'm not going to lie," he said. "I tried to change my returning position a bit to try to throw him off a bit. He probably didn't have his best serving day, which helped me a lot. I took advantage of it – really proud."

Nick Kyrgios was the first into the men's quarterfinals, overcoming a knee problem to outlast fellow Australian Matthew Ebden 6-7 (3), 7-6 (5), 6-2.

Third-seeded Kyrgios called for a medical timeout after nine games and had further treatment two games later to have his left knee taped.

His movement appeared to be hampered but he still had too much for Ebden and set up a quarterfinal match against former Brisbane International runner-up Alexandr Dolgopolov, who beat Horacio Zeballos 6-1, 6-2.

Third-seeded Elina Svitolina had a 6-3, 6-1 second-round win over Croatia's Ana Konjuh and will next play fifth-seeded Johanna Konta.

Qualifier Aliaksandra Sasnovich earned a spot in the quarterfinals against Alize Cornet with a 1-6, 7-6 (2), 6-3 win over Anett Kontaveit. 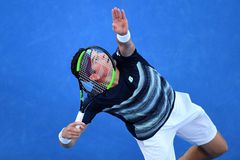 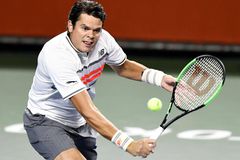