Fresh off an appearance in the Wimbledon final and playing in a hometown Rogers Cup light on the ATP Tour's biggest stars, this looked like the best chance yet for Milos Raonic to make history and win on Canadian soil.

But it won't happen this year.

The 25-year-old World No.7 from Thornhill, Ont. suffered a dramatic 6-4, 6-4 quarter-final loss to World No. 15 Gael Monfils of France on Friday night. Many had projected a Saturday night semi-final showdown between Raonic and World No.1 Novak Djokovic, but Monfils elbowed the Canadian out of that opportunity.

"'Disappointment' is the right word," said Raonic. "In tennis, unless you're the guy winning the tournaments most of the weeks, which there's very few guys that are doing that, you're losing quite a bit. So it's very important to make the most of those, try to learn, try to be better from those situations. That's my next objective. I'll look back at this and give it the right amount of perspective and try to take it to the next process, next step forward, to be better next time, to not let these kind of things repeat themselves."

It was far from a typical straight-sets match.

Raonic started hot in the pro-Canadian packed stadium just after dark. He was serving upwards of 235 miles per hour, pounding ground strokes alongside the athletic Frenchman, and aggressively attacking at the net. Monfils broke him mid-way through the first set and then Raonic fell just shy of breaking right back. Little mistakes mattered big, and he let the set slip away.

Monfils, World No.15 and the tournament's tenth seed, had played Raonic four times before and taken two of those matches. Raonic had won the last two meetings – both this season. But Monfils was coming off a title last week in Washington, rolling just like Raonic and hungering after something bigger as well. He too is without a Grand Slam victory and trying to burst into the same elite group that Raonic is trying to crash.

The Canadian showed obvious frustration in the second set as he struggled to break Monfils, talking to himself and looking up to his box, filled with his coaches, parents, and girlfriend.

Then, with the match tied 4-4, Raonic fended off triple break point before Monfils finally broke the big Canadian, executing super athletic shots. The Frenchman then quickly won the match. Raonic uncharacteristically lost 12 points on his serve – eight in to service games he played poorly.

"Yeah, there's definitely disappointment in the way I lost my serve," said Raonic. "Out of the eight points I lost in those two service games, I think five of them were my own forehand mistakes, quite poor mistakes, I'd say. But other than that I think there are good things to take away."

Raonic had two straight-set wins early this week and was the face of the event. Everyone wanted to spend time with the Canadian star. Sir Richard Branston played tennis with him this week while NHL players like Connor McDavid visited and met him. The demands on his time were more extensive than ever.

Raonic had been determined to do what no Canadian singles player has done in the Open era – win a singles title on Canadian soil. Robert Bedard was the last Canadian to win the men's championship in Canada, when he captured singles titles way back in 1958, 1957, and 1955. Raonic had made the final back in 2013 in Montreal, but he lost to Rafael Nadal.

Stan Wawrinka, the second seed, will meet third-seeded Kei Nishikori in the other singles semi-final Two Canadians will be moving into Saturday's doubles semifinals – Daniel Nestor and Vasek Pospisil. who defeated the Czech duo of Radek Stepanek and Tomas Berdych Friday. They will face Great Britain's Jamie Murray and Bruno Soares of Brazil. Nestor is a two-time winner of the doubles event in Canada. 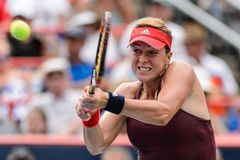 Tennis’ older generation proves they’ve still got it at the Rogers Cup
July 29, 2016 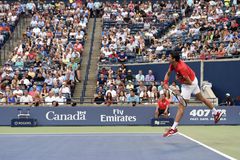