The road back to tennis prominence will not be a glamorous one for Rebecca Marino and she's just fine with that.

Her comeback trail will include several stops at low-level tournaments, a big change from her days playing on Grand Slam showcase courts. Marino feels ready to play competitive tennis again after a four-year absence and is putting the work in ahead of her return.

"I have to start right back at the beginning with $15,000 tournaments and see where I can get in," Marino said. "I'll go through qualifying and I'm okay with it.

Vancouver's Marino was planning to play in two Challenger tournaments this fall but an ITF regulation issue pushed her return date to the winter. She was still on hand for an event this week in north Toronto, serving as a hitting partner at times while squeezing in practice sessions of her own.

"I love being back and hitting again," she said in a sitdown interview at the nearby Aviva Centre. "It feels (a bit) like no time has passed by, which is strange because obviously it's been like four years.

"But I always knew I loved tennis and to be back on the court training and working hard, I think it's where I belong."

A former world No. 38, her game looks like it did before she left the sport after revealing her battle with depression. She worked on her physical and mental well-being during her time away, studied English literature, and competed on the varsity rowing team at the University of British Columbia.

Marino also did some part-time tennis coaching on the side. It helped stoke her interest in a return to the sport.

"I realized that I liked playing a lot more than coaching," she said. "I got the bug slowly and I think about the end of August, I decided I wanted to come back to tennis again."

Marino won three Challenger events in a row in 2010 and had a memorable second-round match with Venus Williams at the U.S. Open that year. She was just 19 at the time and not totally ready for the challenges of life on tour and being away from family and friends.

"I sort of lost a lot of connections that way, which I've regained and I think I can maintain now," Marino said. "I also think I felt like I was missing out on a lot of things back home, which now I realize I wasn't. And also I wasn't one to be in the media, I kind of shied away from the spotlight and to be thrust in it very quickly was very difficult for me.

"Of course now I know how to handle it a little bit better having gone through it."

She cracked the top 40 in the world rankings in 2011 and reached the third round of the French Open. But her depression got to the point where Marino couldn't get out of bed some days.

She took a seven-month break in 2012 to seek treatment, but her passion for the sport was not there when she came back.

Marino felt isolated and far away from supporters when she was on tour. Cyberbullying also made things difficult.

"When I was on the court and in my element there I always felt like I was zoned in," she said. "I don't think I was ever out of it with the tennis. It was more that I would be at these big events and then I'd have to deal with the exterior things. That was the hard part."

Marino, now 26, is comfortable talking about her story although she's not necessarily looking to jump back into the spotlight.

"I think I've learned I'm pretty resilient," she said. "I've gone through a lot at such a young age. I've lived multiple lives, it feels like.

"(But) I think I've learned that I have a pretty cool life."

A shy, quiet type, Marino feels she's a "more dynamic individual" with a lot of experience to draw on.

"I think I'm a little bit more mature now," she said. "Definitely mentally more mature. Having gone through my academic studies too, I think that has broadened my perspective. I don't think there's too much different. I still feel pretty fit and if I didn't think I could do this now, I wouldn't."

At just over six feet tall, Marino has range and power on the court. Her serve still appears to be a great weapon and her ground strokes are potent.

Marino has yet to finalize her schedule but will need a base of three tournaments to get a ranking.

"It's definitely more about the process than about the end result for me right now," she said.

This time around, Marino plans to limit her online activity and not engage in social media. She noted that she's not afraid of it – pointing out it can be a good marketing tool – but doesn't really need it right now.

"I can be pretty sensitive just because that's my nature," she said. "Others are more tolerant of it. I'm okay with it now. I think social media and its uses [were] pretty new back maybe six years ago or so.

"I didn't really know how to handle it. People know what's coming with it now."

Marino's original plan as a teenager was to pursue tennis at the university level, but her early success on tour postponed those academic pursuits.

"I am fresh and I feel that mentally I'm in a better spot right now and I would be able to tackle some of the things that come with the life of being a professional athlete," she said. "I wasn't really prepared for it the first time around. I thought I was going to go to university on a scholarship, and things kind of [accelerated] very quickly.

"I also think having done it before, I know what's coming, so I think I have an edge that way."

It also feels good to have the competitive juices flowing once again, she said.

"I'm excited and I'm also a little nervous," Marino said. "I think that's totally normal to be nervous. It means that it means something to me. I can't wait to get back on court for that first match." 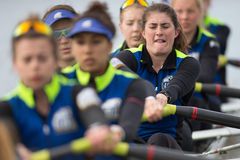 Rafael Nadal to finish season at No. 1 after win in Paris
November 1, 2017
Denis Shapovalov through to second round of Swiss Indoors
October 23, 2017 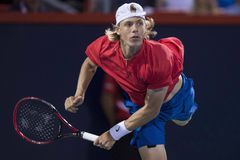