The 18-year-old from Richmond Hill, Ont. fought off more break points, came back from more deficits and found a way to beat 29-year-old Adrian Mannarino of France in the quarter-finals of the Rogers Cup on Friday night.

The win came less than 24 hours after a historic upset of first seeded tennis legend Rafael Nadal, which followed a second round win over 2009 U.S. Open champion Juan Martin Del Potro and a first-round victory over Rogerio Dutra Silva in which he needed to fight off four match points for the Brazilian.

"I've been against the wall a couple times this week and I'm very happy I've come out several times just playing really good tennis in those situations," said Shapovalov. "I think it really shows how I've improved mentally, along with just finding my game at the right moments."

After facing a run of veterans, he will be up against 20-year-old German Alexander Zverev, the fourth seed, in the semifinals on Saturday. Zverev defeated Kevin Anderson of South Africa 7-5, 6-4.

The lanky left-hander with the shaggy blonde hair has emerged as Canada's newest tennis star with his play this week at a tournament some still call the Canadian Open.

Currently ranked 143rd in the world after a win in a lower-level Challenger event only three weeks ago in Gatineau, Que., Shapovalov will crack the top 70, possibly to 66th, for reaching the semifinals. There is already talk of giving him a wild card entry into the U.S. Open at the end of the month due to his new ranking instead of trying his luck in the qualifying tournament.

It was a quieter match against 42nd-ranked Mannarino than the roaring victory over Nadal, but it proved just as difficult.

Shapovalov started out looking low on energy despite the encouragement of the packed centre court crowd.

He double-faulted on break point in the opening game en route to a quick first-set loss.

The two southpaws were on serve in the second when play halted 20 minutes for a light rain but, when it resumed, the crowd sprang to life, chanting 'let's go Denis' on the changeovers as he broke serve and then served out the set.

Shapovalov spent much of the match alternating between errors and impressive winners, consistently fighting off break points on his serve. He had nine aces and seven double faults.

He broke service for a 2-1 lead in the third only to hand it back in the next game, but a roar went up when Mannarino wasted a chance to put away a game point and Shapovalov jumped on the chance to break for a 5-4 lead. He leapt in the air as he closed out the match.

"Against Rafa, it was just a longer, more physical match," said Shapovalov. "I started off pretty slow, just drained from (Thursday).

"Rafa took a lot out of me. But Adrian did a good job of playing fast with me in the first set, really taking it to me. I felt a little bit rushed. I tried to slow things down in the second. Obviously the rain delay helped me. I kind of told myself 'you know, this could be a really good turning point.' "

Asked what he felt most proud of, he said "my fighting spirit.

"If I don't save those match points in the first match, there's no chance of being here. Just having to battle every day. I've had several tough matches. Just getting through it every day. It's really motivating."

Mannarino had knocked out Canada's top player, Milos Raonic, in the second round, although the big-server from Thornhill, Ont., played with a swollen wrist.

Second-seeded Roger Federer continued his mastery over 12th-seeded Roberto Bautista Agut of Spain with a 6-4, 6-4 victory. The 36-year-old Swiss will next face unseeded Dutchman Robin Haase, a 4-6, 6-3, 6-3 winner over Diego Schwartzman of Argentina.

Federer has won all seven career matches and taken all 16 sets against the 29-year-old Bautista Agut.

Federer said he knows Haase well from serving with him on the ATP player council and from practising together.

"I'm looking forward to a tough match because he can serve very well and he mixes up his tactics a lot," said Federer. "Sometimes he tends to just roll the ball in and use the big serve, or he uses a slice a lot and comes in.

"So I don't quite know with Robin what I'm going to get. But, as I have practised with him quite a bit, maybe I am better prepared than if I would have never hit with him before." 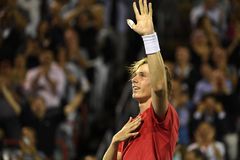 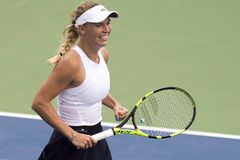