Patrick Chan can execute a quadruple jump with expert precision, but he discovered recently, on the eve of a major skating competition, that it's not so much his skates but his words that he needs to watch.

It all started last week, when a newspaper story took him to task for commenting to a reporter three months earlier that he felt underappreciated in Canada, that figure skating was overshadowed by hockey in this country, that skating isn't what it was in Canada years ago and that life would have been different if he had skated for China, where the government pays its athletes' expenses.

Since returning home from Quebec City, Mr. Chan hasn't stopped. He has been running on five hours of sleep a night, and has spent his days giving interviews, talking about his recent wins and those comments that got him into trouble. He is still managing the backlash – especially to the comment that if they hadn't emigrated from China, "my parents wouldn't have had to make as much sacrifices as they had and there would be a lot more respect for what we do as figure skaters."

A cheerful chatterer at all times, Mr. Chan said his remarks were taken out of context, that he had just returned from a month in Asia and he had been caught up in his enthusiasm for his heritage. He admits he should have been more precise "and a bit more professional" in his comments.

"He does have a bit of a lack of filter," said William Thompson, chief executive officer for Skate Canada. "We all know that. That is part of his charm, but sometimes his mouth gets a little bit ahead of his thoughts."

In English, Mr. Chan tends to talk in a stream-of-consciousness fashion and the words sometimes tumble out like freshets of water, uninhibited. After all, English is not his first language. It is his third.

At home, his father speaks French to him; his mother Cantonese. They thought it would be a good idea for their son to speak several languages, and they left it up to him to pick up English in his daily life. From the beginning, he attended a French school.

"French is a little easier for me," he said. "I'm quite direct and to the point. With English, I sometimes add more drama to it."

The Chans later moved to Toronto, where their son took up skating under iconic, gravel-voiced coach Osborne Colson. Lewis Chan says he and his wife never dreamed their boy would become a national or world champion. But Mr. Colson did, and laid out a path for him.

Mr. Colson not only taught Mr. Chan how best to use his skate blade to turn and carve out beautiful lines in the ice, he also designed his programs and costumes. He declared that he intended to live long enough to see Mr. Chan win the Olympics, but he died in 2006 at the age of 90.

When Mr. Chan competed at the Olympics four years later, he scored fifth over all with a program that didn't include any quadruple jumps. About a year and a half ago, the Chans sent their son to Colorado Springs to study under renowned technical coach Christy Krall in the hope of getting quads into his routine.

It was an expensive move. After a year, the family decided to buy their own condo near the rink. Instead of having one coach who could do every task, they now have Team Chan, as they call it, which consists of Peter Davis, the former sports science director for the U.S. Olympic Committee, who oversees Mr. Chan's program; Lori Nichol, a world-renowned choreographer; Kathy Johnson, a movement and balance coach; Andy O'Brien, a strength, fitness and nutrition coach who lives in Calgary; heralded physiotherapist Mark Lindsay, and Eddie Shipstead, who used special harnesses hanging from the ceiling to help Mr. Chan learn how to do quads without getting hurt.

"There is no snowflake unturned, just to make sure we're doing the right thing for him because he wants to be so good," Ms. Krall said. "It's a lot of expense, but that's what it takes to be a thoroughbred."

Years ago, becoming a thoroughbred was a much more lucrative prospect, though, perhaps making the years of sacrifice and high costs easier to bear. Top skaters could buy Ferraris and mansions. Now, with fewer skating shows and endorsement opportunities, they aren't getting wealthy on their endeavours any more. Mr. Chan's winnings go back into his training costs. Though Mr. Chan distanced himself from his wistful comments about China and the state of his sport, it is not hard to see where they came from.

However, Mr. Thompson, the Skate Canada official, said Mr. Chan does receive "significant support" from the Canada's Own the Podium program, which targets Olympic medal prospects. The money from that can be used to pay coaching, choreography, fitness training or any off-ice activity.

Skate Canada pays the costs of coaches to competitions, Mr. Thompson says, adding that Mr. Chan earns some prize money and even has a private sponsorship that Skate Canada arranged. He has one anonymous sponsor, an individual who gives "not a ton of money, but it's definitely not insignificant."

Mr. Chan also has a long-standing corporate deal with McDonald's restaurants. But it has been extremely difficult to find sponsors, his father says. Lewis Chan admits there is "a fair gap" between his son's expenses and the financial support they receive from associations and the government.

The family has had to resort to fundraising dinners to bridge that gap. In September, a crowd of 400 attended a "sumptuous Chinese buffet" at $130 a ticket. The event offered sponsorship packages and program advertising opportunities.

"The China [support]comment was unfortunate," said Michael Alexander, a Toronto lawyer who supports Mr. Chan and attended the fundraiser. "But Patrick is an elite athlete. He's not a political scientist."

He added that the majority of the people who went to the banquet were from the Chinese-Canadian community. "If it weren't for the concerted effort of Chinese Canadians for Patrick, he wouldn't be able to train," Mr. Alexander said.

"If Patrick is feeling a little underappreciated, I'd say there's some basis for that. It's not like all Canadians are getting behind him [financially]"

Lewis Chan says he is not complaining about his lot in life and he is doing what any parent would to help a child. "Some athletes can barely afford a nutritional meal," he said. "There are lots of people worse off than Patrick. But we have to make every dollar count."

Beverley Smith is a reporter for Globe Sports. 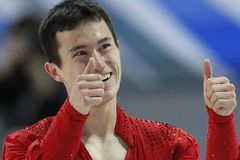 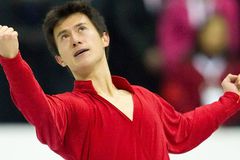 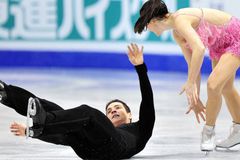