After a week spent pretending to like them, the Air Canada Centre crowd greeted the juniors from Denmark with half-hearted booing.

This was the passive-aggressive variety of jeering – "We hate you, but we still sort of like you. Also, we hate you."

By the end of an 8-0 whipping that looked even worse than it sounds, they'd begun to feel sorry for them again. I'm not sure which is more insulting.

It's been suggested the Vikings first visited Canada about a thousand years ago. If they'd known it would end like this – a smug farewell for their less-imposing descendants – they'd have stayed home to loot at leisure.

Given its first real chance to shine, Toronto took advantage. Knowing they'd be compared with lacklustre crowds in Montreal, fans here came committed to making themselves heard. These people were the antidote to the usual black-hole crowd at a Maple Leafs game, from which no sound or light can escape.

Whatever the tickets cost – and full tournament packages here ran as high as $1,700 – it was also a notably hoser-ish group. Lots of tuques and bell-shaped, middle-aged men who had moustaches a long time before it was a thing.

That was the real marquee matchup at the world juniors: Toronto's hockey patriots versus Montreal's conscientious objectors. Toronto will think it won. Montreal will know it doesn't care.

We've spent the past week in a tiresome wrangle about those empty seats at the Bell Centre. Whether it's cultural politics (right), price gouging (right again) or the fact that Montreal is a Canadiens city rather than a hockey town (right cubed), it misses a more basic truism.

This is how Canada behaves in its shameless hockey ascendance. It's Canada in full plume, peacocking for the world. That idea was always going to be an easier sell in Ontario.

We're double Olympic champions, twice over, and gamboling toward gold in the only other international tournament that catches the national imagination.

The handmaiden of that sort of dominance is apathy.

If we want people really worked up again, we're going to need another Hockey Crisis. Those were at least interesting times. What this deep, disciplined and ruthless Canada squad is doing here is beginning to feel like competitive bullying.

If your interest is in finally winning a world junior championship, the script continued to improve on Friday. Slovakia, a team Canada has already beaten 8-0, staged an unlikely upset of their elder brothers, the Czechs. Canada gets them in Sunday's semi-final.

What followed against the Danes wasn't a contest. It was a Lifetime TV movie entitled Losing Can Be Fun and Instructive.

The Canadians, being Canadian, were keen to talk up their opponents. Absolutely no smirking was detected.

"They play hard. They battle hard. And we expect a hard-fought battle," said coach Benoît Groulx, calling into question the meaning of the word "hard." Ahead of Sunday, Groulx ought to loop back the same speech, subbing "Slovaks" for "Danes."

The Danes were cooler about the whole thing. Even the late-stage, pants-down, paddy-whacking part of it.

The largest hockey rink in all of Denmark seats 5,000. They've been the darlings of a crowd regularly three times that size in Toronto. They are this tournament's Country Mice, minus the big-city culture shock. That arrived Friday.

Their coach, Olaf Eller, is a math teacher and the father of Canadiens star Lars. He's so excessively Danish, you picture him juggling school and hockey with shifts at an artisanal coffee shop and plenty of bicycling around Copenhagen.

He listed off the things that would have to break Denmark's way – goaltending, special teams, work rate and "maybe a little bit more than that." He failed to mention a meteor strike. Then he conceded the game anyway.

"It's going to be tough for us," Eller shrugged brightly, literally just happy to be there. Good thing, too.

It should have been a football score after the first period. Only the heroics of impish Danish netminder George Sorensen kept it close.

Denmark features its fair share of viable professional talent. Sorensen isn't among them, but he's been the star. He didn't come back to Earth on Friday so much as re-enter the atmosphere. And then catch fire.

By the time Connor McDavid undressed him for a remarkable fourth goal, the crowd was easing back. Cheering had begun to feel unseemly.

The title is coming into sight over the horizon, but it doesn't feel like a particularly interesting journey. Only the Americans have given Canada a game, and they bombed out against the Russians on Friday.

The ACC lustily cheered that 3-2 result when it was put up on the big board, reproving that hockey has moved beyond the politics of the Other. What Canada really wants now is to repeatedly shaft our best friends.

What's next? Another cakewalk over the Slovaks, then a real game in the final against either Russia (ermm) or Sweden (that sounds better, and more likely).

This is where you insert the "anything can happen" fine print, but who are we kidding?

As a country, we assume we're always the favourites when it comes to this sport. At points in our recent history, that's been the only victory – the presumption of excellence.

Now that we really are far-and-away the best, it can all feel a little blasé. When next we fall back into the pack, I'll make a note to savour the angst. 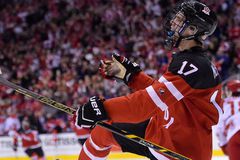 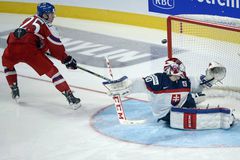 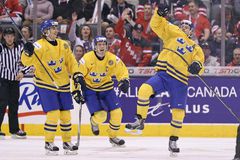 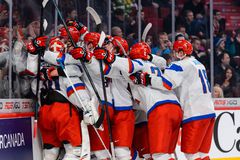