The implosion for substitute NFL officials Monday night just might have been a triumph for Twitter. The best way to follow the last-play debacle that gave Seattle the win over Green Bay was via Twitter's baying chorus of freaks, geeks and intellectual elites. It has become the medium of record in moments of sports controversy.

ESPN's embarrassed duo of Mike Tirico and Jon Gruden did their "more in sadness than anger" treatment of a game spiralling out of control. (Memorable was Gruden's geography lesson of a 6,000-mile flight from Seattle back to Green Bay). But to savour the anarchy of the final moments (coming a day after similar chaos in the New England-Baltimore game) you had to head to Twitter, where there were reportedly 56,000 tweets per minute during the final Seahawks drive.

Just after the two referees in the end zone had signalled different results for Seattle's "Hail Mary" pass on the game's last play, players in the game vented their rage in tweets. Packers offensive lineman T.J. Lang, part of a unit that gave up eight sacks to Seattle, was blunt. " @TJLang70 F**k it NFL.. Fine me and use the money to pay the regular refs... Any player/coach in Seattle that really thinks they won that game has zero integrity as a man and should be embarrassed." (This tweet was RT'd more than 84,000 times.)

Fellow Packers lineman Josh Sitton was no less angry or profane. "@jsitton71 The nfl needs to come to gb and apologize to us for f**king us! These refs r bums!"

A flood of current NFL players also chimed in via Twitter. "I love this league and love the game of football, but tonight's debacle hurts me greatly. This is NOT the league we're supposed to represent" – Drew Brees.

"I've been saying give the refs a break but that TD call was ridicules [sic]. How do you miss that? Pop Warner refs would have gotten that right." – Tony Gonzalez.

"Is the refs workin for the buffalo wild wings commercial?" – Perrish Cox.

Then there were fake NFL player tweets. "@Frank Gore : We need to start a fund for @TJLang70. Dat dude gonna get fined to the moon! #RogerGoodellSucks".

And big names from other sports like the NBA's LeBron James chimed in: "@KingJames I simply just LOVE the NFL to [sic] much to see these mistakes. I'm sick like I just played for the Packers".

Added Dallas NBA owner Mark Cuban: "@mcuban I would love to see what my reaction would be if a Mavs game ended like #MNF. #Expensive#NBAtime "

Just for good measure, politicians leapt in, too, with Wisconsin's public-service, union-busting governor Scott Walker urging a return for the NFL referee union members. "@GovWalker After catching a few hours of sleep, the #Packers game is still just as painful. #Returntherealrefs". While Wisconsin senator @JonErpenbach was helpful for all complainants: "You can leave a message for nfl commish roger goodell at 212 450 2027. #NFL".

The 10-minute denouement of the GB-Seattle epic made for greet ratings on the next show, ESPN's SportsCenter, which captured its highest 11 p.m. ET rating ever as fans couldn't get enough of ZebraGate. While the game's ratings were off from the same week last year (11.5), SportsCenter cashed in a 5.0 rating. Compare that to the previous week when SportsCenter got a 2.7 after Peyton Manning's meltdown in Denver-Atlanta.

Too Much of a Good Thing

Honk if you think a 40th anniversary of Team Canada's 1972 victory over the Soviets is stretching the franchise a little thin. As central as the game is to the national psyche, re-living Phil Esposito's angst for the millionth time in a TV extravaganza is getting a tad shopworn. Just because an anniversary ends in a 0 or 5 is no reason to slavishly reprise a great moment, diluting it in the process. Maybe there's a 10-year-old out there who hasn't heard of Paul Henderson, but unless you put him on Wii or X-Box they're not going to pay attention anyhow.

One rationale for the commemoration, however, is that certain members of the team might not be with us next anniversary. In this regard there's a lot of concern for Henderson, who's in a serious battle with cancer. In that vein, our good friends at Canada's History magazine are trying to organize a petition to get Henderson into the Hockey Hall of Fame. They're auctioning an original Aislin cartoon as well.

No one respects Henderson's great moment more than Usual Suspects, but we have a problem with his credentials for the Hall if it's all about 1972. If Henderson gets in for bringing international victory to Canada, shouldn't Mike Eruzione or Jim Craig also be honoured for the USA Miracle On Ice in 1980 or Petr Svoboda's goal that brought the Czechs the 1998 Olympic gold.? How about Daniel Alfredsson for leading Sweden to the 2006 Olympic gold medal?

All were singular great hockey moments for those nations and on a par with Henderson's incredible performance for Canada in 1972. Just sayin'.

Finally, when will they ever learn about social media? The president of Hockey Calgary resigned this week when it came to light that he'd written a blog insulting his opponents in the debate about body checking for 11-year-olds. Todd Millar wrote this spring in his his personal blog: "There are so many morons in this game that cannot understand that, by simply changing a simple rule, you will save the well-being of 11– and 12-year-olds.". Millar used the word moron another 13 times in his screed.

When the column came to light in a Calgary Sun article just before the board meeting of Hockey Calgary, Millar did them a favour and resigned first. "I understand and acknowledge that the recent 'noise' created by my personal blog expressing personal views (never intended for public distribution) has created an uncomfortable and unfortunate circumstance," Millar said in his letter to the board. 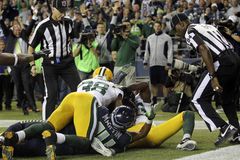 NFL won’t budge on goal of crushing officials unless it can save face
September 25, 2012 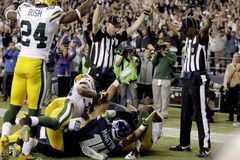