Sarah Meehan Sirk is the author of the short-story collection The Dead Husband Project and a mother of two.

When I was a kid, I'd boast of my hockey lineage to anyone who'd listen. I'd flip through the photo album to the black-and-whites of my uncle, Gerry Meehan, in his Buffalo Sabres uniform, the self-generated wind in his hair as he sped helmet-less down the ice (it was the 1970s). I was too young to remember his playing days, but he went on to manage the Sabres and I became an ardent fan of Alexander Mogilny and Pat La-La-La-La-LaFontaine whose poster hung over my bed, and whom I waited for outside the dressing room in Buffalo's Memorial Auditorium one winter night in 1992, clutching my autograph book, my heart in my mouth.

I have always loved hockey. I still drift to the amber-lit warmth of my childhood living room when I hear the play-by-play crescendoes of NHL broadcasters. I was one of the kids huddled around a TV whenever the latest Rock'em Sock'em came out, wincing and ooh!-ing along with the boys. I am comforted by the smell and chill of arenas. Meditation is watching a Zamboni trace its winding path between periods, the ice clean and new in its wake.

There was never a question: If I have kids, they will play hockey.

They're both still too young now to even be enrolled in house-league, but they've already shown an early and natural affinity for the game. My husband and I have marvelled at the way they picked up sticks and, by some instinct, manoeuvred makeshift pucks into imagined nets, before they could even talk. I've carried my two-year-old daughter, literally kicking and screaming, into the house on summer nights as she's bawled, "I want to play hockey! I want to play hockey!" while her dad and older brother take a few last shots on the driveway net.

But, before they were born, I worked at a sports network at a time when concussions and three letters took over the headlines: CTE. Chronic traumatic encephalopathy, a disease found in the brains of some football and hockey players who'd received repeated blows to the head. I listened to the cracking voices of broken men who stepped out of the shadows of obscurity to say they'd been irrecoverably altered by the sports that they loved. I heard bereaved loved ones describe how their fathers and husbands imploded in front of them. The waves of suicides were already rippling, some players shooting themselves through the heart so their brains could be studied and their pain validated. It changed the way I looked at sports, and it changed the way I felt about hockey.

Yes, these players were pros who took multiple hits over multiple years, and there are thousands (upon thousands) of people who played hockey as kids and never had a head injury or aren't dealing with postconcussion issues. But as we learned more about concussions, we learned that the developing brain is particularly susceptible, and even one concussion can have lasting effects on cognition, mood and personality. We learned how hard they can be to diagnose, how easy it is to get another after your first, and how often kids were playing injured without anyone realizing the lifelong harm that could result.

I believe the culture of youth hockey is changing, I'm just not convinced it's changed enough. It's heartening to read that minor leagues have stepped up their injury prevention, to hear about Hockey Canada's concussion app, or the Greater Toronto Hockey League partnering with a children's hospital that specializes in concussion research. It helps to know that there are guidelines and pamphlets, lists of what to look for, and to hear that kids are pulled from games and told to see a doctor at the first sign of a head injury.

But there are still people who think that taking measures to minimize concussions is "wussifying" the game. There are still parents who berate coaches, refs and young players, who roll their eyes when a kid is taken off the ice as a precaution. Kids are still pressured to "get back out there" no matter the cost, and to hide symptoms of concussions that can already be hard enough for a parent to spot.

I never played team sports myself. The very thought of a ball or a puck spinning in my direction gives me a panic attack. But I believe deeply in the virtues of being part of a team. Especially now, in this fractured world, I want my kids to learn and appreciate what it means to work in sync with others, and if they gravitate to a sport in which that skill can be developed, I want to encourage them. That alone (almost) makes it worth the risk.

But I can't just cross my fingers, or pray my kids never want to play at a level where checking is permitted and the risk of concussions is highest. If we get into the game, I know we'll have to be part of its shift. I know I'll have to speak up against the lingering machismo that contributes to the prevalence of head injuries. I'll have to seek out and celebrate good coaches and champion efforts to reduce concussions. I'll have to support embattled parents of talented kids who've been pulled from the game to fully heal. I'll have to fight to make strength and toughness characteristics of those who have no tolerance for play that can damage brains, instead of those who will play through anything, no matter the cost.

It's easy to say that now, I know. We're not even in the bleachers yet, nor are we the first parents to think these things. And no matter our intentions, we still lose some control when our kids step out on the ice. It's a risk. But I believe the game is moving in the right direction, and if my kids continue to love it, I think it's a risk we're willing to take. 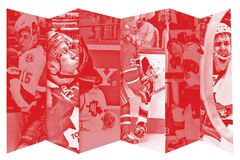 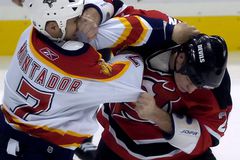 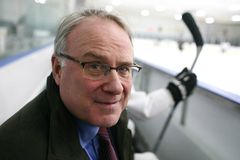