Activision Blizzard Inc. is reviving its Guitar Hero video game after a five-year hiatus, with a new version playable on tablets and mobile devices as well as traditional game consoles.

The new product, which will cost $99 (U.S.), features filmed footage of an audience and band mates rather than the cartoonish images of past releases. Players will be able to jam on a toy guitar with music videos released by artists such as the Black Keys and Fall Out Boy, as well as those produced by Activision, the company said. The game goes on sale later this year.

Mobile represents the fastest-growing segment of the video– game industry, according to PricewaterhouseCoopers. That's led companies such as Activision, the largest U.S. game publisher, to adapt their products. Last year, the company put out a version of its Skylanders Trap Team for tablets in addition to consoles from Sony Corp., Microsoft Corp. and Nintendo Co.

Guitar Hero tests contestants' ability to hit notes on a plastic guitar in time to songs on the screen. The latest instrument looks a little less toylike than the original, said Jamie Jackson, a creative director at Activision's FreeStyleGames, which produced the new version. It has parts that look like brass, as well as a raised, black pick guard.

Battle of Bands With Guitar Hero, the Santa Monica, California-based company is bringing back a popular industry franchise, one that generated more than $3.5-billion at retail and was played by more than 40 million people. It was available from 2005 to 2010, when the fad petered out and the company stopped producing the game.

Activision's new version, the subject of speculation for some time, could be a "catalyst" for the company, Arvind Bhatia, a Sterne Agee & Leach Inc. analyst who recommends buying the stock, wrote in a March 30 note.

Harmonix Music Systems Inc., an original developer of Guitar Hero, announced plans this year to rerelease Rock Band, a competing game. Their new version, which includes a bass, drums and microphone, as well as guitar, will play the almost 3,000 songs Harmonix released in six prior editions of the game, according to Nick Chester, a spokesman for the Cambridge, Massachusetts-based company.

Harmonix was sold to the investment firm Columbus Nova LLC in 2010, with former owner Viacom Inc. taking a $230-million writedown at the time. Both Activision and Harmonix plan to unveil more details about their products at the E3 video game trade show in Los Angeles in June.

Concert Scenes Tony Bartel, chief operating officer of GameStop Corp., the nation's largest retailer focused on video games, said in an interview before Tuesday's announcement that he's looking forward to a return of the products, which give customers a reason to visit stores and check out the hardware.

"What really resonated with gamers last time was the guitar," Bartel said.

Activision recorded the concert scenes using as many as 400 actors, which were expanded to look like crowds as large as 120,000 with computer-generated imagery.

The videos will shift between different sized venues and different back-up musicians. Band mates and audience members shake the heads in disappointment if the player makes a mistake. The crowd and drums get louder based on where the player is standing on the stage.

"Most big video-game franchises fulfill some universal fantasy," said Eric Hirshberg, who heads Activision's game publishing division. "The fantasy at the heart of Guitar Hero is one of the most universal of them all." 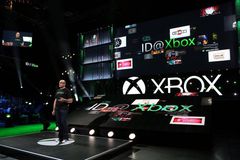