Fresh off its biggest acquisition to date, business-software giant Open Text Corp. is actively hunting for more deals, fuelled by a war chest of close to $2-billion (U.S).

"We don't see ourselves as capital constrained" to make further acquisitions following the January close of Open Text's $1.62-billion purchase of the enterprise content division (ECD) of Dell Technologies Inc., said Mark Barrenechea, chief executive officer of the Waterloo, Ont.-based company, in an interview. "The [deal] pipeline remains active and we are not slowing down in putting our capital to work. We're looking at all styles, sizes and colours."

Mr. Barrenchea spoke following the release of disappointing third-quarter earnings on Monday. Open Text's revenue of $593-million, earnings before interest, taxes, depreciation and amortization (EBITDA) of $189.2-million and earnings of 45 cents a share all fell short of analyst expectations.

While Open Text stock dropped by 5.3 per cent on Tuesday in response to the earnings shortfall, BMO Nesbitt Burns Inc. analyst Thanos Moschopoulos dismissed any concerns, saying it was due to weaker margins in the acquired business that seem to be "transient" and by underwhelming licensing revenues that occur seasonally every third quarter.

The earnings miss should prove to be a distant memory if Open Text continues to build on its acquisitive ways. Under the leadership of Mr. Barrenechea – a veteran U.S. tech-industry executive who joined the company five years ago – Open Text has become a streamlined seller of services to digitize the internal processes of large enterprise and government customers. It's a market Mr. Barrenechea estimates to be $35-billion in size, with Open Text on track to generate $2-billion in annual recurring revenues.

But while revenues of the company's existing businesses have been flat or slightly negative for years, it has consistently delivered 10 per cent-plus revenue and earnings growth annually by steadily buying and successfully integrating other companies. Investors have rewarded the company's deal-making by steadily driving up Open Text's market value; last December, the company sold $585-million worth of stock at no discount to finance the Dell deal.

That means the company's path to growth remains tied to successfully executing more deals. Mr. Barrenechea told analysts on a conference call on Monday that "we are not slowing our investment strategy" after spending $2.6-billion on deals last year, and noted the company had quadrupled the size of its mergers and acquisitions team to 20 people since 2015. "We plan on growing and investing in that M&A team, further scaling up our expertise and our capital-deployment potential," he said.

The company currently has $449-million in cash and can tap $1.5-billion in debt financing without violating covenants with existing lenders, Mr. Barrenchea said in the interview.

"They certainly have the financial capacity to do more acquisitions, given their current balance sheet and cash generation" said Mr. Moschopoulos. (The company generated $156-million in operating cash flow in the quarter). "However, in the near term, I would actually prefer that they focus on integrating all the assets that they've acquired over the past year – and I don't think that additional M&A is needed, near-term" to support the stock given expected costs savings.

Mr. Moschopoulos said "it's hard to determine" what Open Text might buy next, given it has moved into new areas such as business intelligence and data analytics with some recent deals. "It's certainly possible they'll acquire more companies that overlap with their current product functionality, although given how much they've already consolidated their space, I suspect we'll see them do more deals that further broaden their product scope." 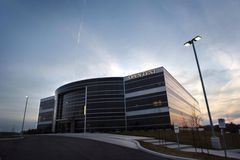