"We're not perfect," Mr. Jobs told a packed house at the company's California headquarters Friday. It was a humbling admission for one of the world's most admired technology companies, brought about by weeks of mounting criticism over the fourth-generation iPhone's tendency to lose reception when held a certain way.

The problem surfaced shortly after the new iPhone went on sale a month ago, but has since become a major issue for Apple, even though Mr. Jobs sought to play down concerns. Indeed, Mr. Jobs spent much of his appearance claiming that many other smart phones - including some BlackBerry models - sometimes also suffered from poor reception. He added that only 0.55 per cent of iPhone 4 customers - the company has sold three million units in less than a month - have called to complain about antenna and reception issues. The entire problem, he claimed, has been "overblown" by the news media.

Nonetheless, the company is responding. Mr. Jobs announced Apple will offer iPhone customers free "bumper" cases, which fit around the new iPhone and have been shown to mitigate reception problems. Apple will also offer refunds to those who have already bought bumpers from the company, and those who wish to return their phones altogether.

The offer extends until September. After that, it's unclear whether the company will continue offering free cases or simply introduce an upgraded model with a hardware fix.

The release date for the new iPhone in Canada is set for July 30, and the same offers apply here, the company said.

Apple releases its next quarterly earnings on July 20. But short of a full-on product recall, most analysts believe any response to the antenna situation will have a minimal impact on the company's bottom line. Indeed, the iPhone may become far less of an issue once the public gets its first look at the iPad tablet computer's impact on Apple's financial statements.

Consumer Reports, the magazine that likely forced Apple's hand when it initially said the antenna issue meant it could not recommend the new iPhone, called the free bumper offer "a good first step."

"However, Apple has indicated that this is not a long-term solution, it has guaranteed the offer only through September 30th, and has not extended it unequivocally to customers who bought cases from third-party vendors," the magazine said Friday.

"We look forward to a long-term fix from Apple. As things currently stand, the iPhone 4 is still not one of our recommended models."

A source close to a major Canadian carrier said Apple sent an e-mail shortly after midnight Thursday, California time, reassuring carriers the launch date planned for late July was still on track. Some employees at the carrier had been tracking the publicized antenna issues closely, because of the immense administrative costs surrounding a product recall.

Charles Golvin, principal analyst at Forrester Research, said Apple did a good job of addressing the concerns of two important constituencies: die-hard Apple fans who may have been disenchanted by the furor, and "fence-sitters" who are considering whether to buy the new iPhone.

"By and large, you have to look at the bottom line being sales figures," he said. "People are still buying them."

Apple's decision to set a September deadline on its refund and bumper case offers may ultimately cost the company some short-term sales, as customers opt to wait until then to see if Apple unveils a new and improved version of the phone in time for the holiday shopping season. But analysts say even that downside is limited.

"It will not have a positive impact - it's a negative on the marginal customer," said Colin W. Gillis, director of research and senior technology analyst at BGC Financial.

"On the other hand, they're still sold out for up to three weeks."

A sampling of tweets - from real, and not-so-real - people about Apple's announcement that it will give customers a free protective case for its new iPhone 4, to solve problems with signal reception:

ceoSteveJobs: 0.55 per cent of users have called about reception problems. The other 99.45 per cent dropped the call.

GlennF: Apple is holding a press conference on Friday, but will they hold it the right way? 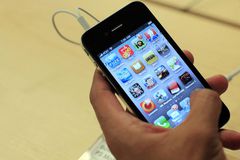 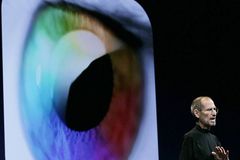 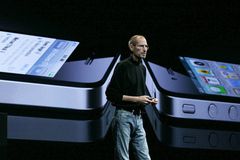 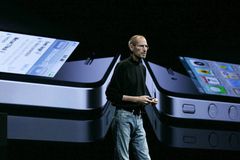