In 2003, the company created software that enabled users to flag their e-mails and attachments as "secret," "protected," "unclassified" and so on. Now it is the dominant player in a market known as "data classification," with 900 customers including the U.S. military, the North Atlantic Treaty Organization, Dow Corning and the Canadian government. Some of its rivals license Titus's patented technology.

Though barely known in its hometown of Ottawa, Titus is the Microsoft of its modest little corner of the software industry. Or it was, until the real Microsoft showed up.

Suddenly, the data classification business is attracting attention – and money. Analysts say it is playing an increasing role as organizations respond to the growing reality of massive data breaches, which have hit companies such as Target Corp., JPMorgan Chase & Co., Home Depot Inc. and eBay Inc.

Adding to the complexity is the increasing presence of important corporate data in the cloud and on mobile devices. "Companies are finally waking up and realizing they need to better understand the data they have, what's sensitive and not, what needs to be protected," said Heidi Shey, a senior analyst with Forrester Research in Boston.

Titus software allows companies to easily identify which e-mails and attached files are the most sensitive and therefore most in need of highest levels of security. After growing by 20 per cent to 30 per cent in recent years, the company's revenues shot up by 120 per cent the past 12 months and are expected to top $30-million (Canadian) in its fiscal year ending Oct. 31.

"I feel vindicated…the world is beating their way to our front door," said Titus chief executive officer and co-founder Tim Upton. "We're at the top of the game, but this is no time to sit back and relax."

The sector's growth has left Titus – profitable since its founding in 2005 without having raised a dime in venture capital – reassessing its destiny. "We have done obviously very well without outside money, so what if we had outside money?" said chief financial officer Tom Martin. "How much faster can we grow?"

So the 150-person firm has set an ambitious goal: to reach $100-million in revenue in the next two years. It is in talks to raise about $50-million in growth capital to hire more salespeople, expand product development, possibly fund acquisitions and go public. Selling the firm is an option, but "we're not actively looking" to do so, said Mr. Martin.

Titus grew out of a security technology consulting firm that Mr. Upton, a 51-year-old Ottawa native, ran with two co-founders above a bagel store in the city's west end. One customer asked the company to create a tool to label its e-mails based on the sensitivity to outside eyes. "We didn't think it was anything big at first," he said.

But while many clients spent vast sums on data security without getting much value, digital labelling proved "deployable and useable," said Mr. Upton. "We knew the most complicated things around security and architectures and encryption," added co-founder and chief technology officer Stephane Charbonneau. "But the thing that…got so much traction was the simplicity of having a labelling solution to drive this other complicated stuff."

One month after offering the tool for sale in 2003, the Australian Federal Police e-mailed asking to buy it. A month later, Goldman Sachs followed suit. Software revenues were $250,000 in the first year and $750,000 in the second. The partners spun out Titus as a separate company in 2005 and wound down the consulting business in 2010.

Through it all, Microsoft was a key partner – much of what Titus classifies runs through Microsoft e-mail systems. That leaves Titus executives choosing their words carefully as they talk about their newest rival. "We've always had and continue to have a strong relationship with Microsoft," said Mr. Upton.

Given Microsoft's size and focus on shifting its software business to the cloud and competing against giants like Amazon, "I don't think this is about [Microsoft] going after the classification market as a standalone," said Garrett Bekker, an analyst with 451 Research in Houston. Rather, Microsoft is trying to "weave security throughout all their cloud offerings."

Mr. Bekker said as Microsoft expands in its space, Titus and other rivals should segment the market and increase coverage on other platforms, like Google. Some customers will "be happy to go with Microsoft, whatever Microsoft offers."

Titus executives seem unfazed. Co-founder Charlie Pulfer, Titus's vice-president of mobile, said Microsoft data classification customers will have to use the giant's data security products, whereas "our approach is to let customers choose their own" security software to go with its classification product.

Said Mr. Upton: "To me [Microsoft's arrival is] all about validation. The market is just so much bigger that they will win some, and that's fine. We will continue to win a lot." 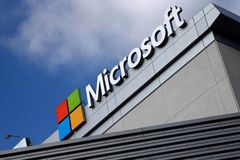 Microsoft reminds us that Canada is still a branch-plant economy
Subscriber content
June 17, 2016