When it comes to online dating, no one does it quite like Canadians.

Numerous studies suggest Canadians are pretty much the world's most active users of social networking, so it should probably come as no surprise that Canada is also a hotbed for online dating.

According to comScore, a web measurement company, Canadians spend more days a month and minutes a day on online dating sites than users in the U.S., U.K., France and Germany.

And Canada is also home to one of the world's busiest dating sites and one of the web's most unlikely success stories.

When Lady Gaga recently unveiled her big-budget video for "Telephone," fans couldn't help but notice the blatant product placements strewn throughout, from some of the world's most familiar brands.

While Plenty of Fish may not be a household name for those who haven't navigated the waters of online dating, the free dating site is one of the world's most popular and has made a millionaire out of B.C. native Markus Frind.

Not bad for a homemade website that started as an experiment in learning a computer programming language in 2003. And it was run entirely as a one-man show until Frind recently started hiring a few people to help manage the massive website that competes against corporate heavyweights.

"It was just the right idea, the right execution, the right site - and it was free. Everything else at the time was paid, so I guess that was the integral part of it," says Frind.

The site recently surpassed 105 million logins in a month, Frind says, with as many as 1.5 million people visiting daily, and as many as 380,000 messages were being sent between members an hour.

According to Comscore, Plenty of Fish is second to only eHarmonyin Canada in terms of unique monthly visitors, but it's No. 1 in total visits, with three times eHarmony's traffic. In the U.S., Plenty of Fish is No. 3 in unique visitors but again gets more traffic than any other dating site.

While other dating sites are struggling to grow, Plenty of Fish keeps chugging along.

"The dating category is actually moving down a little bit (in traffic)," said Bryan Segal, comScore vice-president of sales.

"But Plenty of Fish has definitely shown growth over time while the industry has relatively stayed stable.

"Maybe economics come into play because it's free."

If you logged on to Plenty of Fish back when it launched and revisited it now, the differences wouldn't be all that striking.

In 2003, the site's design and visual look was pretty basic. Plenty of Fish looked the part of the underdog alongside its slick competitors.

All these years later, the site's design has had only minimal touch-ups and looks positively prehistoric compared to others. But Frind says he's not bothered by his site's dated design, and neither are users.

"This is a tool, a utility," Frind says. "If you're using a spoon or a fork do you really care what it looks like? You're using it to eat. You're using this dating site to meet people. These other things, the look of it or the feel, all that stuff really doesn't matter."

Even the functionality of the site has seen relatively few changes in seven years - which in Internet years is an eternity.

"I tinker with it somewhat ... I've tested a lot of stuff, but usually every change I make makes it worse," he says with a laugh.

Frind has made his fortune through advertising and became an Internet folk hero in the site's early days when he posted a photo of a cheque for two months of ad revenue from Google, totalling $901,733.84 (U.S.).

While his competition spends untold millions on marketing and advertising, Frind relies mostly on word of mouth and says the Internet advertising he buys brings in a tiny percentage of new business.

"You just need a product that works and then people tell their friends to go to the site because it works," he says and claims the site is responsible for one million relationships a year.

Kim Kaplan, Plenty of Fish's vice-president, wouldn't say what was paid for the appearance in the Lady Gaga video since it was part of a larger marketing campaign with the singer. But she said it was good value for money.

"Our search results were up about 15 per cent (the next day) ... and you think about (tens of) millions of people seeing it, let alone people talking about it and being integrated into press, it's been phenomenal."

Frind says he's not too worried about his competition, and is concerned more with social networks stealing the attention of his users.

"Before Facebook came along people spent x numbers of hours on the Web and it was shared between a number of sites. Now Facebook has come in and sucked out an hour or two, and instead of spending 16 minutes on my site they're only spending 15 minutes now, on average. And if they spend less time they send less messages which means the probability of meeting up is slightly lower."

Frind still believes Plenty of Fish should be free but is looking into how to capitalize on the money spent by online daters.

"When it comes to dating, people are always willing to pay," he says. "My users spend $30 million a month on other dating sites, so there's a lot of money I could get from that. There's a lot of business opportunities there."

Although traffic in the industry has slipped overall, he doesn't see online dating going away.

"It's mainstream now, while it wasn't so much back then (when the site launched). Back then it was, 'Why are you using a dating site?' Now it's, 'Why aren't you on one?"'

The best of Craigslist Casual Encounters
April 15, 2010
The office wife and cubicle hubby: Till downsizing do us part
March 8, 2010 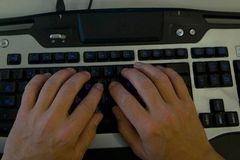 Flirtatious texts tend to stick around
February 9, 2010
Have you ever dated a co-worker?
February 9, 2010
Follow us on Twitter @globetechnology Opens in a new window
Report an error
Due to technical reasons, we have temporarily removed commenting from our articles. We hope to have this fixed soon. Thank you for your patience. If you are looking to give feedback on our new site, please send it along to feedback@globeandmail.com. If you want to write a letter to the editor, please forward to letters@globeandmail.com.
Comments