Mark Jeftovic didn't know his company had somehow managed to kick WikiLeaks off the Internet until he read it on a blog one morning while eating breakfast. And he never would have guessed he would then find himself working with the controversial website, which is under fire for publishing classified government documents on the Internet. The strange turn of events all began with a blogger's typo.

"It's all so Kafka-esque and surreal in the sense that I just wasn't hugely ideologically supportive of WikiLeaks before all of this happened," said the president of Toronto-based EasyDNS, which helps route traffic on the Internet.

The nimble Canadian firm was drawn to the battle as hackers on both sides of the issue furiously attack computers in a bid to advance their causes. Mastercard Inc., PayPal and Amazon were among the companies targeted Wednesday by WikiLeaks supporters after they said they wouldn't deal with the site.

It all started for Mr. Jeftovic with a blogger writing last week about the decision of a competitor named EveryDNS to stop working with WikiLeaks because it had attracted attacks from hackers. But a small typo turned that into "EasyDNS," leading to strange days for Mr. Jeftovic. Within hours of the erroneous report, the mistake had been repeated hundreds of times and mainstream news organizations were repeating it as fact. Soon, his company was getting blasted on the Web for giving WikiLeaks the boot.

"This wave of hostility started to come in," he said, referring to postings on the company's website and comments directed toward its Twitter feed. "I saw it spreading and taking on a life of its own."

What he didn't know is that after days of denying any role in the site's demise, he'd be called upon to play a key role in its resurrection.

Companies such as EasyDNS and EveryDNS are the interpreters of Web surfing, translating alphabetic Web addresses such as www.google.com into the numeric codes that tell the Web browser where to go. EveryDNS's decision wasn't motivated by politics. A denial-of-service attack by hackers against WikiLeaks - in which EveryDNS's Web servers were overwhelmed by requests for information - was making life difficult for EveryDNS's other paying customers.

After EveryDNS pulled the plug on WikiLeaks, a former customer whom he would not identify approached Mr. Jeftovic and said he was working with the whistle-blowing website to set up a new website at wikileaks.ch.

Mr. Jeftovic agreed to step in and fill the gap, but attached conditions to his offer. While his customers have access to all of the company's servers, WikiLeaks is housed on two "battle hardened" servers so that any attack wouldn't affect the company's other 55,000 customers. The site is now running at wikileaks.ch and wikileaks.nl, with about 15 per cent of its traffic being directed by the Canadian company.

While the early concerns from EasyDNS customers were from the mistaken belief the company was stifling information, Mr. Jeftovic faces a new set of complaints from customers who are angry that he is now enabling the site and its controversial founder, Julian Assange.

A dozen customers threatened to move their business elsewhere when they thought he had pulled the plug on the site last week. Now, he's dealing with customers who are upset he has given it renewed life.

"Some have called to say they are not leaving, but they are not happy," he said. "We don't know how many will go - it's too early to tell what net effect this will have, though I'm suspecting at the end of the day the way we handled this will be a net benefit for us."

He's keenly aware of the potential legal problems he's created for himself. Government officials around the world are trying to figure out whether WikiLeaks or Mr. Assange have broken the law. If authorities try to shut down WikiLeaks permanently, any of its business partners could find themselves in an awkward situation.

"Our lawyers have basically told us that if they want to shut us down they'll show up with an injunction and we'll have to follow it and then try and have it overturned later," he said. 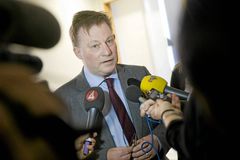 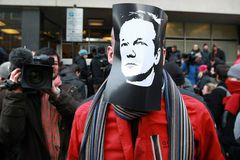