Many Canadians followed the saga of Tanner Bawn's broken wheelchair yesterday in no small part because the proverbial bad guy in the picture was our oft-derided national airline, Air Canada.

A recap: The 10-year-old boy, who is fighting a terminal illness, travelled to New York City Wednesday to live out one of his final wishes, but his motorized wheelchair was damaged during transit. While Air Canada was, in fact, in the process of fixing the damage, it still took them 24 hours to communicate that to the public.

That was about 23 hours too late. The Wednesday night after Tanner and his aunt, Catherine Connors, tweeted the following message, directed at Air Canada:

What followed Wednesday night and all day Thursday, were thousands of Twitter comments from Connors' community, many of whom were horrified that hours were passing by without any assurance from Canada's biggest airline that the boy's broken wheelchair would be fixed or replaced.

As for how @AirCanada reacted during this time, well, it appears that what looks like the airline's official Twitter page is in fact an abandoned destination. There is one odd message on the page, a reply to a Microsoft user, making me think someone is squatting on their account.

While Air Canada can lobby Twitter to get their company name back (as they should), the one big lesson here for the airline is that it's time for them to embrace social media.

With that in mind, here are five tips that may hopefully push them (and, for that matter, any other business that deals with the public) in that direction:

The first step to any good social media strategy is to keep an ear to the digital ground. If Air Canada was on the lookout for online conversations about their company, they could have intercepted many of these messages and mitigated the damage. There are plenty of listening tools on the web, but a great free service that will e-mail regular updates about a specific topic or company name is Google Alerts (helping a business track relevant blog posts, etc.). Moreover, there are plenty of social media dashboards, such as HootSuite, that make it easy to monitor Internet buzz about topic or brand conversations on Twitter.

Reach out to the individual

When a customer or client posts positive or negative feedback on the web, it's important for a business to connect with that person. This can be as simply as a quick thank you message or a note acknowledging the problem and offering next steps. This one-on-one relationship is critical in the web world. When I spoke to Connors she said she had limited conversations with Air Canada, and none of those interactions took place online.

Reach out to everyone

If a situation explodes, such as this Air Canada web fiasco, it's important for a business to respond to the flurry of comments and criticisms. If there are too many people flooding your feed with messages, then Twitter, Facebook, and other online tools make it easy to simply post an update saying that you're aware of the situation and you're working on a solution. Although Air Canada was apparently in the loop Wednesday night insofar as what was happening with the wheelchair, from the web perspective, they were a black hole.

Aside from posting an online message, another helpful strategy is to shoot a short video. Last year Dominos Pizza faced a PR nightmare on the web when some employees did some pretty unsavoury things to some pizzas and put the evidence online. Instead of hiding under a rock, Dominos CEO Patrick Doyle posted a video update apologizing to customers. However, even Dominos was a little slow to react. It took them almost two full days to post the video, much too long for the online social community that mobilizes quickly and expects reactions in hours not days.

Based on Air Canada's press release, the company sent the damaged wheelchair to an open-all-night repair shop, but that information was not shared with anyone, not even Tanner's family. A good idea during a crisis like this is to post status updates on a regular basis. If Air Canada sent out a tweet on Twitter, a note on Facebook, or blog post revealing updated details about the wheelchair fix, the online buzz would have turned increasingly positive (versus heating up as it did, prompting web users to drag Air Canada's name through the mud).

Tanner's wheelchair saga did have a happy ending. The airline fixed the boy's chair, personally delivered it to his hotel and is planning to fly him and his cousins to Disney World (another wish of his). However, the story has not finished online. I suspect this case will be an example, within social media circles, of how a huge company dropped the digital ball. Over the next few days, and weeks to come, it's critical that the airline stays on top of this story and updates the public on what happened and how the company has made it right.

Furthermore, it's high time that Air Canada invested in a social media presence, just like many of their competitors (such as WestJet). As of right now, the @AirCanada account is still static, there is no mention of this incident on the company's website and the last update on their Facebook page -- a self-serving post about Avis returning to the Kelowna Airport -- is from July 25th. 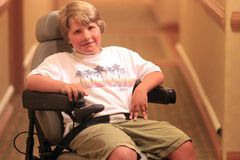 Follow Amber MacArthur on Twitter @ambermac
Report an error Editorial code of conduct
Due to technical reasons, we have temporarily removed commenting from our articles. We hope to have this fixed soon. Thank you for your patience. If you are looking to give feedback on our new site, please send it along to feedback@globeandmail.com. If you want to write a letter to the editor, please forward to letters@globeandmail.com.
Comments